Morning of the Streltsy execution by Vasily Surikov

The execution of the Streltsy refers to the massive disbanding, executions, and cruel punishments enforced upon the Streltsy by Peter the Great from June to July of 1698 after their second unsuccessful attempt at a political revolt.  So extreme was Peter’s fury that he cut short his ‘Grand Embassy’ to Europe, where he had traveled to forge alliances with the European powers in order to participate in the punishment personally, beheading five Streltsy himself according to several witnesses.

Creation of the Streltsy:  an elite fighting force

The ‘Streltsy’, literally meaning ‘shooter’ in Russian, and easily translatable as ‘musketeer’, were originally formed in 1550 by Ivan the Terrible in an effort to revolutionize Russia’s military and serve as its most elite unit.  3,000 Streltsy were recruited and divided into units of 500, each unit placed under the command of a member of the Russian nobility.  After recruitment, service in the Streltsy became hereditary.  In addition, they also performed various other functions as well; the Moscow Streltsy regiment was assigned responsibility for guarding the Kremlin (the royal residence), as well as having the honor of serving as the Tsar’s personal body guards.  Other duties included basic police functions and fire-brigade responsibilities.  Streltsy were originally entitled to a salary of four rubles a year (worth considerably more in 1550), but due to constant budget constraints, were offered other forms of compensation instead, including strips of land and permission to farm or act as merchants to supplement their income.  The Streltsy were also not subject to taxation.  Because it was more attractive to supplement their incomes instead of solely serving in the military, their combat effectiveness diminished over time.

Crisis in the Streltsy ranks 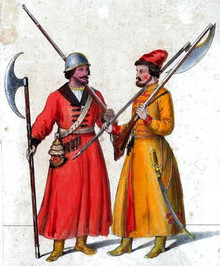 Russian Streltsy of the 19th century

The Streltsy’s size and influence grew from about 3,000 in 1550 to 55,000 in 1681, with approximately half that number in Moscow alone.  However, their combat effectiveness and disorganization in comparison with newer European modeled regiments became increasingly visible by the end of the 17th century.  Frustrating attempts were made to absorb and retrain the Streltsy into the new regiments.  Fearing that new European influences would threaten their power, members of the Streltsy became involved in secret political back-room deals that led to their first unsuccessful coup of 1682.

First conspiracy and uprising of 1682

After death of Tsar Fyodor in 1682, his sister, Sophia, capitalized on the Streltsy’s unrest and incited them to riot on rumors that the Tsar had been poisoned, attempting to assume the throne in the chaos. However, she was only semi-successful, as the riot ended with both of her younger brothers (the younger Peter I and Ivan V, who was partially mentally impaired) inheriting the throne together.  However, the Streltsy were powerful enough to install Sophia a temporary regent of Russia.  Because of Sophia’s rule, Peter and his family viewed her with a particular contempt.  When he was 17, Peter and his family forced his sister from power and ordered her into the Novodevichy Convent, a relatively common fate for uncomfortable female figures of noble descent.

However, Sophia was not finished.  In 1698, the Streltsy revolted again, disobeying their orders, forcibly removing their commanding officers, and marching on Moscow with a force numbering 4,000 men conspiring with Sophia to retake the throne.  Peter sent four of his own regiments and a cavalry unit (numbering approximately 2,300 men) to engage the Streltsy, defeating them outside Moscow.  Peter cut short his historic ‘Grand Embassy’ in order to carry out the first of many extensive investigations.  57 Streltsy were executed in Red Square by hanging, with 74 more to follow four days later.  Many Streltsy were also whipped, drawn and quartered, and buried alive, with the total number of executions eventually reaching 1,182.  The younger Streltsy were relocated to remote settlements, limiting their political influence, the rest being completely disbanded by 1720.

Peter’s punishment was swift and ruthless, stemming from his strained relationship with Sophia and perhaps from his childhood memories of the first bloody riot of the Streltsy in 1682 occurring when Peter was only 10 years old.  On his orders, some of the corpses of the executed Streltsy were hung from outside the windows of the Novodevichy convent in full view of Sophia as sign of his resolution to move Russia closer to Europe and a warning never to try to remove him from power again.

One of the powerful and captivating illustrations of the bloody events following the Streltsy uprising is the painting ‘The Morning of the Streltsy Execution’ by the famous Russian artist Vasily Surikov.  It is currently on display at the State Tretyakov Gallery in Moscow.  Painted almost two centuries later in 1881, it is proof of the indelible mark those grisly events were destined to leave on the course of Russian history, forever cementing Peter the Great’s rule and grand ambitions to revolutionize Russia by bringing closer it to Europe.