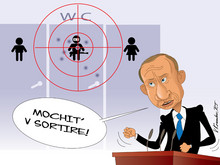 Nowadays, there’s hardly anyone in the world who doesn’t know Vladimir Putin. But back in 1999, when Russia’s former president was prime minister (for the first time, that is) in Boris Yeltsin ’s Russia, he wasn’t as well-known.

In his presidential candidacy Putin made himself a headliner of worldwide news with his strict rhetoric on different issues, such as global politics, military conflicts and domestic issues. But his very first statement of the sort came in September 1999, some three months before Boris Yeltsin stepped down as president and handed the power to Putin.

Speaking at a press conference in the capital of Kazakhstan, Putin made a famous reply to a journalist’s question on the situation in the war-torn Chechen Republic:

"If they are in an airport, then it would be in an airport. I beg your pardon, but we WILL hunt them down and kill them even in a toilet (mochit’ v sortire). End of story.”

Mochit' v sortire is a far more colloquial way of saying “to kill somebody in a toilet.” Linguists have tracked the origins of this phrase in Russian to prison slang – or argo. Mochit' comes semantically from the word mokruha which stands for brutal murder; while the etymology of the word sortir dates back to the 18th century, when the French language was considered fashionable in Russia’s higher circles.

When aristocrats wanted to avoid confusion, instead of saying “I’m going to the restroom,” they said "je dois sortir" - literally, “I need to go out.” Over the years the word grew into a euphemism meaning “toilet.” It eventually degraded into a purely colloquial word, and was even considered abusive by the intelligentsia.

Putin’s statement was made several years before the 9/11 terrorist attack changed the outlook of modern-day anti-terrorism. Many still say it was a clear indication that even back then, Russia was very serious on the issue, owing to the bloody struggle with terrorists in the Caucasus. After a ceasefire was signed in the town of Khasavyurt in 1996 to end the first Chechen military campaign, many expected the Caucasus to return to peace.

But things went the wrong way, as remaining Chechen militants used this time to prepare for another attack in an ambitious plan to seize the entire region. On 7 August 1999, fifteen hundred Chechen militants - led by Russia’s most wanted terrorist Shamil Basaev - broke into the territory of the Republic of Dagestan, next door to Chechnya. With the help of Dagestan’s militia, Russian troops fought for every village in remote mountain areas.

By mid-September the Chechen fighters were eventually kicked out of the Republic. Losses on both sides were many times lesser than the overall death toll in the Caucasian wars. But experts say this doesn’t make the months fighting any less significant for the region’s history. It exposed the fact that Chechen militants weren’t quite ready for peace.

What was initially seen as a defensive operation escalated into a major offensive against terrorism. And Vladimir Putin's notable phrase coincided with the start of the second Chechen campaign.

Nowadays, the terrorist problem for Russia is not as serious as a decade ago. But what was said by the current Russian prime minister back then, still remains something of a euphemism, verbally depicting the Russian anti-terrorist struggle.

The Wanderers An itinerant is a nomad. In Russian culture one very particular group of 19th century artists called themselves the Peredvizhniki, meaning the Wanderers or Itinerants.