When it comes to fighter planes, Russia has a hall of fame which is hard to challenge. The big names of Soviet military plane production from the propeller and on to the jet age are iconic. Ilyushin, Sukhoi, Tupolev, and Yakovlev helped make air warfare what it is today. And one more name has been chattered across radar rooms and fighter intercoms throughout the Cold War world and continues to provide mainstays of the Russian airforce today: MiG.

Founded by the Soviet aircraft designers Artyom Mikoyan and Mikhail Gurevich, the abbreviation MiG came from their names, ‘Mikoyan and Gurevich’ (‘and’ in Russian is pronounced like ‘i’ as in the word ‘middle’, and so we get ‘MiG’).

The design bureau started making aircraft for the Soviet armies fighting the Nazis, but their early models didn’t compare well to other Soviet planes or to their German-built opponents. However MiGs came into their own with the arrival of jet power. 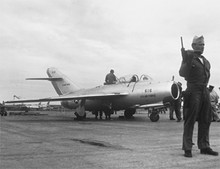 MiG-15bis at the American Kimpo air base, South Korea

The first breakthrough came with the MiG 15. Arriving into the Korean War, the plane shocked U.S. and UN forces, outclassing all its opponents. Operating near the North Korean-Chinese border, raging dog fights earned the territory the name ‘MiG alley’. With Soviet planes and technicians arriving to China and North Korea, Soviet pilots also joined the fray but had to try and keep their identities secret as the USSR wasn’t supposed to be a combatant. Russian pilots have recalled how they were given cards with commonly used Korean flight commands to say over their radio intercoms, but the deception had mixed results with reports of Russian swearing being intercepted in the heat of combat.

With its wide, open nose and swept back wings, the MiG 15 was one of the most widely produced jets ever, 12,000 being built by the Soviet Union and another 6000 produced under license in foreign countries. 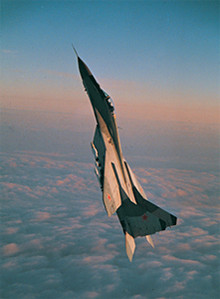 Later on the MiG 15 evolved into the MiG 17 which was used in Vietnam, as were MiG 19s, the first supersonic jets produced by MiG. But the greatest jet to serve North Vietnam was the MiG 21, the second of MiG’s big successes. It was nicknamed ‘balalaika’ because of its resemblance, when viewed from above, to the traditional Russian stringed instrument. When it arrived, the MiG 21 was again one the most advanced fighters around, and many North Vietnamese pilots became aces while flying it. The threat it posed led to the creation of the U.S. ‘Top Gun’ and ‘Red Flag’ advanced flying schools. It’s been used by over fifty countries and still serves in some airforces over half a century after its maiden flight. It has set aviation records the world over, and in name at least is the most produced supersonic jet in aviation history.

MiG kept innovating, producing the MiG 23, 25, 29 and 31. Many MiG 31s are still in service with the Russian airforce today. Currently in development is the MiG 35, with vastly improved radar and control systems that may once again let a MiG compete technically with the best modern fighters around.