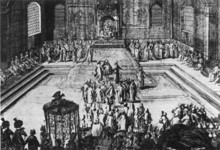 Russian ambassadors in the Hague, 1697.

The Grand Embassy to Europe was one of the crucial and life-changing journeys of Peter the Great. The Grand Embassy was a Russian Diplomatic mission sent to Western Europe in 1697-1698 to search for allies in the fight against the Ottoman Empire and to strengthen the economic cooperation between Europe and Russia.

Peter the Great was the first Russian monarch to travel abroad. The initial goal of the diplomatic mission on the move was to visit European countries and establish stronger ties with neighbors. Peter the Great was hoping to gain support in his war against the Ottoman Empire for the northern coastline of the Black sea. His goal was to build a massive fleet for the war against Turkey. For that, he needed to hire western ship builders and create strong and well-trained naval forces.

Three grand ambassadors lead the diplomatic journey; Franz Lefort, Fyodor Golovin, and Prokopy Voznitsyn. Peter the Great himself went incognito under the name of Pyotr Mikhailov – a doubtable cover for a man who was extraordinary tall (over 2 meters) and very recognizable in Europe. Officially, there were 250 people traveling along with the Russian Tsar. 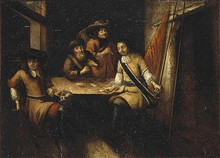 The mission was supposed to include meetings with the German Emperor, the King of England, the Pope, etc. However, Peter the Great did not receive much support from the Western European leaders for his anti-Ottoman campaign. It was a difficult time for many European countries, as they were involved in the opposition fighting for the Spanish throne and didn’t care much for the Russian conflict with Turkey. The initial goal of the mission failed.

One of the goals achieved by the mission was the creation of a coalition against Sweden. But Peter the Great was forced to return to Russia due to the Streltsy uprising that began in Moscow in Peter’s absence.

After the uprising was suppressed, the Russian Tsar started to implement a series of reforms to modernize Russia influenced by the ideas he picked up in the West. His political program for the Russian Empire was basically formed during the course of his journey. He started the creation of a government that would be based on serving for the benefit of all. 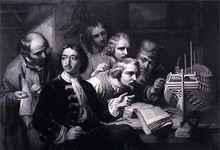 Peter the Great is studying the theory of shipbuilding. By unknown artist

The Tsar considered himself to be the first serviceman of his homeland, and he meant to educate people by his own example.  He began his reforms with an extraordinary order to not wear beards (exceptions were peasants and the clergy) and dress in German clothes.

He introduced an administrative reform similar to the European one, changing the way provinces were administered. He also devised a complicated system of titles and ranks one could acquire for his faithful service to the Tsar and the country. For the first time in the Russian history, a common man could become a noble solely by his faithful service, as by this decree Peter was also trying to fight the anti-reformist Boyars who inherited high raking positions for generations without having enough skill for them. The Table of Ranks existed until the Russian Revolution of 1917.

Being one of the greatest reformers in the history of Imperial Russia, Peter the Great is criticized by some Russian historians for his harsh and too radical reforms aimed at the westernization of Russian society until it eventually lost its national identity. Some write that he returned from Europe a different man, so different in fact, that one of the most controversial conspiracy theories suggests it wasn't even Peter the Great, but an impostor sent by the West to rule the Russian Empire for the benefit of Europe. They suggest that after he returned, he sent his wife off to a monastery and killed some of their children, then remarried at his convenience and proclaimed himself Emperor, giving rise to almost a century of political unrest. Many Western historians see it differently, claiming Peter the Great was a barbarian, which everyone in Europe saw during his journey. They claim he, together with his delegation, were badly educated people with no manners and no negotiating skills. However, Peter's input in the country's development remains remarkable.