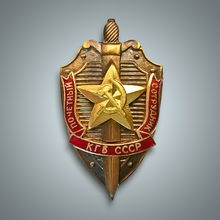 Should you ask a foreigner to say a three-letter word that is associated with Russia or the USSR, you’re almost certain to hear KGB – short for Komitet Gosudarstvennoy Bezopasnosti – or the Committee of State Security.

Indeed, it’s only three letters, but KGB could be a serious contender for the world’s most well-known abbreviation. And almost 15 years after the organization ceased to exist – these three letters are still often heard.

Its origins date back to 1917 when Felix Dzerzhisky created the Cheka (Chrezvychainaya Komissiya po Borbe s Kontrrevolutsiey i Sabotazhem – Extraordinary Commission for Combating Counter-Revolutions and Sabotage). It was based upon the Tsarist Security forces and was destined to protect the national security of the young soviet State. Over the years it has changed names several times (from NKGB to MGB and then, in 1954 – after Joseph Stalin’s demise, to KGB) and on several occasions was part of other security bodies (for example, in 1953 Lavrenty Beria – a former head of Soviet security forces - merged the interior ministry with the state security ministry).

By the time the KGB got its name and became autonomous in 1954, it was already a solid force, protecting the Soviet state from internal and external threats as well as gathering intelligence worldwide. It became a collective name for security in the country, uniting almost twenty directorates – each with its own responsibility.

For instance, while the first directorate was carrying out international espionage, the 5th was aimed at imposing censorship and internal security against artistic, political, and religious dissension and the 7th directorate was responsible for surveillance on Soviet and foreign citizens inside the USSR. By its strict - at times harsh - but nonetheless organized activities, the KGB bred fear both within and beyond the Soviet Union.

It was in espionage that the KGB built its reputation as one of the world’s most effective intelligence services. With an extensive global network, the KGB operated with legal and illegal agents in target cities. “Legals” worked in Soviet Embassies and were protected by diplomatic immunity. In the event of being caught, the worst fate they could face was expulsion to Moscow.

“Illegals” worked in the field independently from diplomatic and trade missions – and included Westerners recruited by Moscow. It is impossible to say which agents dominated – as most of the KGB’s archives still remain classified – but the result of their combined work was clearly seen.

The success of KGB spy rings – partly owing to weak national security in the Western world at that time – included stolen secrets of nuclear weapons technology (delivered by the Cambridge Five spy ring) and the US Manhattan project (delivered by scientist-spies Klaus Fuchs and Theodore Hall). This kept Moscow technologically abreast with the West in the early Cold War period – the USSR successfully tested its own atomic bomb in 1949 and created the Tupolev Tu-144 SST airplane, known as the Russian Concorde.

Such blows to the West’s strive for technological dominance did not go unnoticed. National security was stepped up, making life for KGB insiders much harder. A string of defections and double-agent games followed in several decades of spy scandals. One of the most notable of the period was the story of the KGB “illegal” Rudolf Abel – one of the masterminds of Moscow’s operation to acquire nuclear bomb blueprints from the U.S.

He was betrayed by one of his aides and arrested in New York in 1957. After five years imprisonment he was returned to Moscow in exchange for an American pilot, who had been downed in USSR’s Sverdlovsk Region and charged with espionage.

Another blow came almost thirty years later when the KGB’s resident in London, Oleg Gordievsky turned out to be a double agent working for MI6. He defected to the UK. It is believed that Gordievsky revealed almost the entire KGB’s network in Western Europe to British Intelligence. Later on, he published several books to prove the claim. In 2007 Gordievsky was awarded the St. Michael and St. George medal for his activities in British security. However, in 1985 Soviet authorities sentenced him to death in absentia for treason and Moscow has yet to revoke the sentence.

The KGB also made a name in alleged assassinations of the USSR’s enemies. The most high profile targets were political dissident Leon Trotsky (slain by KGB agent Mercador in 1940 in Mexico), U.N. Secretary-General Dag Hammarskjöld (it was alleged that the plane crash which killed the diplomat was masterminded by the KGB) and Bulgarian playwright Georgi Markov (shot by an umbrella-design gun in 1978).

These allegations were leaked mainly by defected agents, who claimed that the KGB was behind several brazen political assassinations, including – according to defected Lt. Gen. Ion Mihai Pacepa – the killing of U.S. President John Kennedy. Such allegations indirectly proved the organization’s power, but were largely detrimental to the Western perception of the KGB.

The KGB was disbanded in 1991 with the collapse of the Soviet Union. Its duties concerning security inside the country were spread among several different agencies. Most of the responsibilities were succeeded by the Russian security service - the FSB. It is only in Belarus that the word KGB is still in force as the country’s security service retained the name. But the three letters that once gripped the Western world in fear still remain in the information flow. Russia’s former president – now prime-minister – Vladimir Putin was a KGB officer in Soviet times – something which is now often used as a label against the politician by some Western media.

Udarnik An “Udarnik” is a Soviet word for an overproductive worker. The udarnik movement was launched and supported by the government to intensify the industrial development of the country.