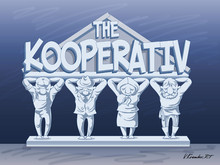 Professor: “I demand for my protest to be written down in the protocol!”

Chairman Sidorin: “Well remember your protest, Professor, but we can’t write it down, for the protocol was eaten.”

A quote from the 1979 satire “Garazh”. In it a group of members of an East German “kooperativ” are waiting for their garages to be built. When the number of garages is reduced, four people will have to lose their claims to them. Those with powerful connections in the group arrange to expel those without them. But the outsiders rebel, lock the door of the meeting room and demand that a suitable decision is reached. All night they have to negotiate. The film throws a humourous light on the farce which the collective and cooperative ideals of socialism had become by the late 1970’s.

It had not always been that way. The idea of the cooperative formed in Britain as the industrial revolution took off. Instead of a company being owned by one person or group, the people working for it could own it and their efforts would result in their collective benefit. This did not manifest itself in the workers kicking out a private owner but rather with examples of groups of artisans or tradesmen with their small businesses clubbing together to create something bigger which they wouldn’t have been able to do on their own.

As with Marxism, which was also formed in the industrial revolution, the idea of cooperative or collective organization of a workforce became very attractive to revolutionaries in Russia (as well as in many other places) around the turn of 20th century. The terms cooperative and collective have many differences and nuances in their definitions. They also found many different forms when applied in reality. However, unlike many theorists or small time practitioners, the success of the revolution in Russia enabled communists there to practice the idea of collectivization and cooperative behavior on a scale never before possible.

Sweeping across the entire society, capitalist structures of private ownership of factories or businesses gave way to collective ownership. At least that was the ideal. In reality, what it meant was state ownership and organization. One of the best examples of how rough a road it was to total collectivization was what happened to agriculture. 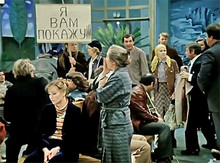 
At the creation of the Soviet Union, agriculture throughout its territories had changed little in centuries. Landless serfs had been supposedly emancipated the century before, but compensation taxes they had been forced to pay to their landlords left them just as poor as before. It was Stalin that began the collectivization of agriculture in the Soviet Union, and as with most things Stalin touched, the process involved suffering on a cataclysmic scale.

The rationale behind working and owning land collectively was twofold. Firstly, it was thought that by pooling labour and resources production could be increased to the levels needed to provide for the needs of the burgeoning factories. Secondly, it was a way to destroy the capitalist system in the countryside represented by the private landowners, known as the kulaks. At first collectives were simply announced. It was hoped that people would voluntarily flock to join them. They did not.

So instead the lack of collectivization was blamed on the oppression of the kulaks and so called ‘forced collectivisation’ began. On a theoretical level, it is wishful at best to think that ‘forced cooperation’ could work. In reality it meant death squads of commissars roaming the countryside murdering anyone suspected of being a kulak (with the attendant denunciations by villagers wanting to settle personal scores), the mass seizure of property by the state, and the wholesale deportation of farmers to Siberia. Before collectivisation, farming was backward, but the system worked and the rich soils had long gained Ukraine and southwestern Russia the title of ‘breadbasket of Europe’. The effect of this ‘forced collectivisation’ was to destroy this centuries old system. The resulting plummeting yields brought starvation and death to millions. Only by 1940 did yields reach levels that had existed before collectivisation. Many peasants and later historians saw collectivisation as a re-instatement of serfdom.

Victory over Nazi Germany brought collectivisation to Eastern Europe and the Baltic states.  Throughout society, collective activity, or at least the mask of it was the acceptable way to get what one wanted.

The collectivisation of agriculture continued right up until the end of Soviet Union. Throughout that time, the state proved that it was patently unable to properly manage such a complex system. Vast swathes of ex-Soviet territory have been reduced to desert by relentless planting and grazing to pursue production targets rather than manage the land. Reported increases in production were also highly dubious. By 1970, the Soviet Union was a net importer of grain and this situation continued for decades after. 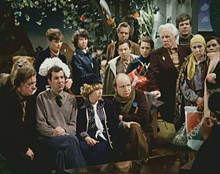 By the 1980’s the satire provided by the film "Garazh" summed up the entire tottering edifice nicely. Collective farms lied about their grain yields. Factory managers lied about their production. Bureaucrats used these false figures to compile false reports about the state of the collective economy. Collectives for the construction of housing, garages or other amendments were really just an acknowledgment that the state would fail in its promises to support people and became vehicles to use patronage and friends in positions of power to grab whatever one could. The rot had set in right from the beginning, in the twenties and thirties. Secretly everyone knew the system was riddled with corruption and was a shadow of what it purported to be. As it all began to implode, the state could not even act as the overall employer it was set up to be. It was summed up by an East German phrase towards the end of the 1980’s. “We pretend to work and they pretend to pay us.”

Such was the fate of the communist collective, a nice idea, which, taken beyond the moderate versions which existed within a capitalist system, was ruined by the rigours of reality.