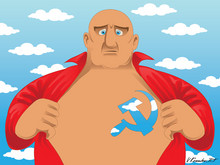 Dukhovnost’ is the Russian understanding of the spiritual potential of a person that boosts his intellectual and moral development on the road to success. A more general definition of the term is a longing for spiritual harmony, which is more important than all the basic necessities and comforts of everyday life.

Confused? Anyone would be. Because the first paragraph is interpreted by many Russians in whichever way they like. One of the most recent interpretations was made by the Chairman of Russia’s Olympic Committee Leonid Tyagachev, who said that the victory of Russian cross-country skier Nikita Kryukov at the 2010 Winter Olympics in Vancouver was achieved “thanks to his great dukhovnost’ that prevailed”. This interpretation stressed the will for victory, no matter what the difficulties were. At any rate, the Russian sports official wanted to sound clever and succeeded in doing so without thinking twice about the word dukhovnost’.

The more traditional interpretation of dukhovnost’ is the presence of spiritual motives within each human being. The word comes from the Russian “dukh” - spirit. It may be religion, may be communism, but the core of the notion is that the person should always remember about his ideals, beliefs and use them as a guiding light.

In Orthodox Christianity, showing will and spirit was traditionally seen as a manifestation of human conscience. Among other features of dukhovnost’ were the idea of sacrifice, helping others in need, as well as belief and respect for the Tsar. Another key value is the desire for self-enlightenment and self-perfection. It was not only priests who encouraged this – it was strongly advocated in the works of many Russian writers, including Anton Chekhov , Leo Tolstoy and Fyodor Dostoyevsky.

After the 1917 Bolshevik revolution, the concept of dukhovnost’ did not go away – even though the new authorities despised Christianity. Lenin and his allies realized that they would not be able to hold on to power unless they developed their own elightenment system with a set of values. What emerged was a blend of ideology and dukhvnost’. After the long working day, people were encouraged to study the works of Marx, Engels and Lenin, practise sport to make their willpower stronger, sing in a choir (to develop team spirit) and attend concerts, the theater, shows – even Russian and world classics were interpreted from the standpoint of Communist ideology. The objective of all these activities was to raise “true builders of Communism” who would set an example for workers in other countries to overthrow their rulers. No matter whether people liked it or not, this approach to dukhovnost’ could unite society. One even more important notion was the idea of sacrificing one’s own life for the sake of the nation. Many heroic deeds of Soviet people during World War II were based on that notion.

Later on, all these elements were united under the term “spiritual and moral upbringing”. It was part of education in primary and secondary school, in college and at university. Reading books about loving the Motherland, helping WWII veterans, regular visits to the theater to see the latest play about the pleasures of life under socialism – all these were “the building blocks in the Soviet wall of dukhovnost”. In 1961, the 22nd Communist Party Congress put all these values into a document entitled A Moral Code for the Builder of Communism.

If some work of art did not suit the Soviet concept of dukhovnost’, the authorities did their best to wipe it out of the hearts and minds of the people. This is exactly what happened with Boris Pasternak’s novel Doctor Zhivago, which went on to gain worldwide recognition. The main characters of the novel managed to maintain their dukhovnost’ through all the hardships of life in Russia at the beginning of the 20th century. Authorities in the USSR did their best to discredit the book. Newspapers of that time were flooded with letters orchestrated by local Communist Party authorities. Here’s the text of one of the most absurd ones: “I have not read Parternak but I’m convinced that it’s a bad book”. Jazz in the 1930s and rock’n’roll in the 60s and 70s were also against the party line. Here’s a popular saying of the 1930s: “If you play jazz today you’ll betray your Motherland tomorrow”.

However, it was not all that bad in the first Socialist country in the world. Local authorities did their best to develop the nationwide network of theaters, libraries and hobby clubs for workers and peasants. Shows in Moscow theaters frequently sold out. People in the USSR also enjoyed a broad network of vocational schools, institutes and universities - if one wanted to, it was not that difficult to get a basic education.

But by the middle of the 1960s, more and more people in the USSR were getting the notion that the authorities were lying when they spoke about the “bright future of Communism that was not that far away”. The economy was collapsing; people saw that their living standards left much to be desired. By the end of the 1980s, people in the USSR and the countries of Eastern Europe were not taking any more – the world of communist dukhovnost’ collapsed.

So who occupied that niche? The comeback of the Russian Orthodox Church was huge. There was a whole campaign to restore churches – the key elements of Russian dukhovnost’ in the 19th century. The other side of the coin was that many officials made an immediate switch from Communism to Christianity, which again caused a lot of doubt about their sincerity. For many people, this was a sign that consumer society prevailed. However, the beginning of the 21st century saw the restoration of some key dukhovnost’ elements – like love of the Motherland and the reinstitution of family values in society – the authorities made this a state priority.

So, there you have it. All the manifestations of dukhovnost’ in one society in less than a century. And it is up to each person to decide, which spiritual path to choose.