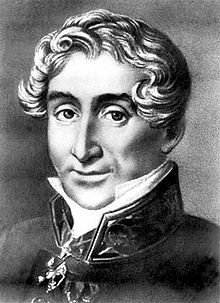 Domenico Gilardi was a leading Swiss architect who worked primarily in Moscow in the early 19th century. Swiss by birth and Italian by nationality, his full but short creative life was almost entirely connected with Russia. His fate as an architect would be changed forever for the infamous Moscow fire of 1812 that ravaged the city, destroying almost three quarters of it.  While the events were tragic, they gave way to a unique opportunity; to redesign much of the city from scratch. Gilardi would in turn give much of his talent and strength to the reconstruction of Moscow in the neo-classicist style.

Gilardi was born in 1785 in the town of Montagnola near Lugano, Ticino, in the south of Switzerland. The Ticino district had long been known for producing several of Europe’s leading architects, including several artisans that had in turn dedicated their careers to Russia, Pietro Antonio Solari and Domenico Trezzini among them. Domenico Gilardi found himself in a similar position to those artisans who had come before him; not having the opportunity to try their hands at their craft in their native and small Switzerland, they left for foreign lands, working in other countries. Wide opportunities and the growth of Russian architecture had historically attracted the attention of architects from many different countries, including Switzerland. However, the decision to move to Russia was an easier one for Gilardi than for the many who had come before him; Gilardi’s family was already connected to Russia.  Members of the Gilardi family had been living in Moscow for 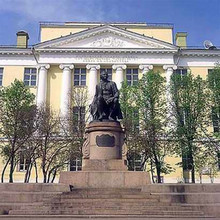 The old building of the Moscow State University (Photo from http://mskwalks.narod.ru)

Three Gilardi brothers had been working as architects in Moscow since 1787, two of which – Ivan and Osip – were architects of the Moscow orphanage. In 1796 Ivan’s eldest son, Domenico, arrived in Moscow from Montagnola. No one in the Gilardi family could have known that Domenico would subsequently become the most famous of the Gilardi line. Domenico was only eleven years old at the time of the move, and while very young, he already showed an aptitude for art like many in his family. However, architecture was not his first calling. The young Gilardi’s original desire was to become a painter.  Noticing his son’s tendencies, the father sent his 14 year-old-son to study painting in St. Petersburg, where he studied with the famous artist Carlo Scotti. In 1803, Domenico left for Italy to continue his studies in the Milan Academy of Art.

Attending classes at the academy, he came to the conclusion that it was not painting, but architecture that was his true calling. The professors of the academy noticed and supported his

decision to redefine his creative aspirations. However, the years Gilardi dedicated to the study of painting were not wasted on him. They left an indelible footprint on his creativity, making him pay extra close attention to the surrounding landscapes of his future structures, focusing on the harmony between architecture and the surrounding environment. His training in painting landscapes and monument design would help him understand how to design the interior of his projects, where the balance between architectural forms along with painting and sculpture is extremely important.

In 1806, Gilardi graduated from the Milan Academy and spent another four years studying monuments of architecture and art from other cities in Italy such as Rome, Florence, and

The Fire of 1812 and the reconstruction of Moscow

History, however, was about to play a large role in the fate of Gilardi. After the invasion of Napoleon’s Grand Army, Gilardi’s work changed dramatically.

Tensions between Napoleon and Tsar Alexander I of Russia had been brewing throughout the Napoleonic Wars in Europe, and in June of 1812, Napoleon’s Grand Army invaded Russia, setting off what is now known in Russian history as the “Patriotic War of 1812”.  Napoleon’s army advanced extremely quickly, while the Russians used ‘scorched earth’ tactics in combination with their retreats deeper into Russian territory. With the army of Napoleon looming on the horizon of Moscow in August of 1812, Gilardi along with his eldest children and servants left for Kazan. The 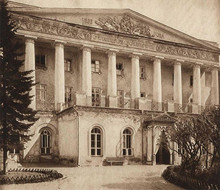 French would eventually take the city, but only after heavy losses at the Battle of Borodino. Furthermore, even after the fall of Moscow, Alexander I refused to concede defeat. In keeping with the Russian scorched earth tactics, the largely wooden city of Moscow was ordered burnt to the ground to further confound the French troops. Three quarters of the city was lost to the fires. The Gilardi family returned to Moscow in the fall of that year while the city was still under French occupation. However, with no real way to supply their army, the French retreated shortly thereafter, and almost immediately afterwards, the huge task of restoring the city of Moscow was begun.

Gilardi contributed heavily to the reconstruction of the entire city of Moscow, including restoring and opening new branches of the Orphanage, as well as working on several other projects through the rest of his career. These would include restoring the University in Mokhovaya Street, the Riding court at Kuzminki, The Widow’s Home, and The Catherine Institute.  He would also rebuild several public buildings such as libraries that had been destroyed in the fire, as well as work on private commissions from the famous Gagarin and Golitsyn families.  All of these projects were completed in an unusually short career lasting under twenty years. Gilardi was a master of the Neoclassicist style of architecture as a result of his broad training, and his signature can be felt in many of the projects he would work on during his career.

In 1832 Gilardi travelled back to his native Switzerland to attend to problems with his health.  He would construct only one project there; a church near his native Montagnola. He would never return to Russia, dying in Switzerland in 1845 at only sixty years of age.  While never completing a project of great significance in his native Switzerland, his work and footprint on contemporary Moscow can still be felt to this day.