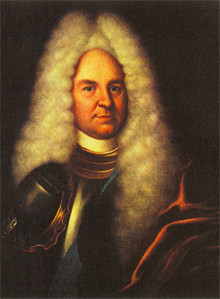 Patrick Gordon was a Russian General originally from Scotland who served under several rulers, most importantly Peter the Great.

Fleeing his native Scotland at a relatively young age due to religious oppression, Gordon found himself a home and a place in history as a soldier in the Russian service. It was General Gordon who, by his decisive move to send his troops to the Troitse-Sergiev monastery in support of the young Peter the Great, effectively decided the power struggle between the Regent Sofia and Peter in favor of the young Tsar. Gordon would defend Peter’s throne a second time, during the Streltsy Uprising of 1698.  Gordon was a gifted writer, keeping a diary in English of his later days in the Russian service.  Excerpts provide a riveting account of the Streltsy Uprising; from its beginnings, through attempts at negotiation, to its bloody conclusion as he protected the throne of his Monarch.

Birth and departure from Scotland

Very little is known about the early life of Patrick Gordon, but a hazy outline of his youth and upbringing can be drawn.  Patrick Gordon was born in the northern highlands of Scotland on March 31, 1635 on the estate of Auchleuchries. The Gordon family was an important one, being members of the clan of Aberdeenshire. Gordon’s family name, however, would do little to help him in his early life. The Gordons were religious Catholics, and the family played a notable role in the English Civil War fighting for the Royalists and Charles I. After the execution of Charles I and the establishment of the Commonwealth of England under Oliver Cromwell, Gordon’s family was stripped of its titles and land.  Furthermore, Royalists were forbidden to serve in the army according to Commonwealth law.  Gordon, too young to take part in the conflict, but growing up in a world shaped by its consequences, was forced to find his destiny abroad.

Service in Europe and arrival in Russia

Patrick had been taught the arts of fighting, fencing, and shooting by his father, and in June of 1651 at the age of 16 left his native Scotland for the German city of Danzig. Europe was perpetually at war, and Gordon found himself in the midst of it, fighting for the Swedes against the Polish.  Gordon would switch sides many times during the conflict until he was caught in an interesting twist of fate.  While serving in the Polish ranks, Gordon’s garrison was dispatched to do combat with Russian forces for control of the city of Smolensk in 1660. Gordon’s unit, fighting the army of what was to be his new homeland, was captured.  The Russian unit was led by Scottish Colonel John Crawford, and the Scotsman in the Russian service managed to convince his countryman Patrick (at the time his prisoner) to leave the Polish forces and enlist in the Russian army. Gordon accepted the offer, knowing that many Scottish royalist emigrants were already in the service of the Tsar, including six members of the Gordon clan itself.  Patrick hoped he had finally found a more permanent home, and on September 2nd 1661 arrived in Moscow, bringing with him a rare library of books by ancient authors on the art of war. These books would later become the reading material for Peter the Great, who would passionately devour them in his attempts to revolutionize the Russian army.

Russian Service and a fateful encounter

Gordon was introduced to Tsar Aleksey, who put the Scotsman through a careful examination.  All foreign officers applying for service in the Tsar’s army were thoroughly questioned and examined before being admitted to the ranks.  After Gordon was subjected to several tests including fencing, marksmanship, and combat strategy, the Tsar accepted him into his service and immediately gave the rank of Major and the Russian name and patronymic of Pyotr Ivanovich; this was an unexpected and unheard of gesture on behalf of the Tsar, as most foreigners entered the army as mere privates.  Major Gordon would begin to work his way through the ranks, becoming a colonel in 1664, and commanding his own garrison in the Ukraine from 1670 to 1677.  He especially distinguished himself in the Russian-Turkish War of 1677-1678 and was promoted to Major-General for his bravery and victorious missions.  Gordon was now the only foreigner in the Russian army to hold the rank of General.  It was at this moment that events were set in motion that would change his life forever.

1682 saw the death of Tsar Fyodor III Alekseyevich, and almost immediately a struggle for control of the throne ensued. Fyodor Alekseyevich left behind him two heirs to the throne, the physically weak and ill 16 year-old Ivan, and the 10 year-old Peter.  Sofia, Peter’s half-sister, engineered a bloody coup with the help of the Streltsy (a Russian army unit) to install herself on the throne as regent of Russia until power could be passed to Ivan.  Sofia’s aim was to keep Peter from the throne at all costs, and several members of Peter’s family were killed in front of the young prince at the hands of the Streltsy.

Sofia ruled with an iron fist, and was fiercely distrustful of all foreign and European influences.  At one point she went as far as to relieve Gordon of his rank, only to return it to him shortly thereafter.

It was in-between two unsuccessful Crimean campaigns that Gordon and Peter would first cross paths.  On September 17, 1688, the young Peter visited Gordon’s home in the German Quarter for the first time.  Gordon was impressed with the young man’s ambition and thirst for learning as the young prince waited for his moment to take the crown from his half-sister.  The Scotsman became Peter’s consultant in artillery, fortification, and other military disciplines.

In the summer of 1689, affairs between Peter and Sofia finally came to a head.  As Peter turned 17 and inherited his right to the throne, Sofia engineered another secret pact with the Streltsy; this time, the goal was for them to kill Peter, liquidate the German Quarter, exterminate foreigners in positions of power and reorganize the army to be loyal only to Sofia.  Peter got word of the bloody plans and fled to the Troitse-Sergiev Monastery for protection.  In September of that year, Gordon mobilized his regulars (comprised of foreigners) and marched with them to the Monastery as well in support of Peter. Gordon’s actions effectively left Sofia without any military support, and Sofia was forced to flee to the Novodevichy Monastery. Gordon’s actions placed him in the circle of the Tsar’s most trusted advisors at the age of 54, and he would be instrumental in Peter’s army reforms.

Peter trusted Gordon so much that the Scotsman was essentially left in charge of Moscow during Peter’s “Grand Embassy” to Europe.  However, Peter’s travels would be cut short by yet another Streltsy uprising, carefully planned to coincide with his absence in an attempt to restore Sofia to the throne.

On June 6th, while Peter was in Europe, the Streltsy garrisons stationed in Velikiye Luki (near what is now modern day Pskov) marched on Moscow.  Gordon had been aware of the situation brewing for months, and chronicled the events and his correspondence with Peter right up to the defeat of the Streltsy outside Moscow on June 18th.  Gordon made numerous attempts to convince the Streltsy to surrender, warning them of dire consequences.  His efforts, however, were in vain:

“When I told them that they would not be permitted to go to Moscow, and that they must not think of it, they replied that they would rather die than not get to Moscow…I then intimated that …if they did not embrace the gracious offers of His Majesty now, they needed not expect such conditions again, when once we should be obliged to use compulsion to bring them to obedience…Finding no alteration of their mind, I took my departure with an indication of sorrow…I sent yet another [officer] to demand a categorical decision. But they rejected all proposals of compromise, and boasted that they were as ready to defend themselves by force as we were to attack. Seeing that all hope of their submission was vain, I made a round of the cannon be fired…”

Gordon’s troops routed the Streltsy in short order, and when the fighting was over, the remaining Streltsy were rounded up, questioned, and the leaders of the insurrection executed; 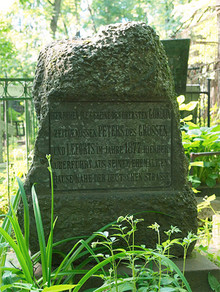 “Twenty-four individuals were found guilty, on their own confession, of the most shocking crimes, and of having designed, when they got to Moscow, to massacre certain Boyars, and to extort an increase of pay, and a new regulation of their services. On these we pronounced sentence of death, to consist in beheading. They were confined apart, and directed to confess, receive the Eucharist, and prepare for death.”

Upon Peter’s hasty return, he commended Gordon for his services and completely disbanded the Streltsy. Gordon had in the course of his lifetime protected the Tsar’s throne twice. The victory over the Streltsy was to be his last, however. Gordon, already an aging man in 1698, continued serving the Tsar until he fell ill and died on November 29th, 1699 at the age of 64. Legend has it that the Tsar wept as he personally closed Gordon’s eyes for the last time. In Peter’s presence, the General was buried in the first Catholic Church in Russia, constructed in 1694. Gordon was a devout Catholic to the end, and Peter made sure that Gordon would come to rest in accordance with the traditions and beliefs that exiled him from his home in Scotland and brought him to Russia in the first place.