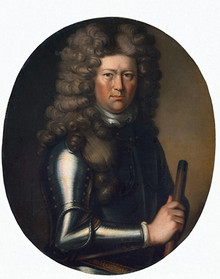 Cruys continued his work on fleet construction in Voronezh until 1702, when he was sent by Peter the Great to the city of Arkhangelsk to fortify it against Sweden.  The Swedes had been repeatedly attempting to take or destroy the city, as it represented Russia’s only port of trade and water connection to Western Europe.  Cruys arrived in Arkhangelsk to find the state of the city’s defenses incredibly bad.  The forts designed to protect the city were in a state of disrepair, and two naval vessels captured from the Swedes the year before intended for the city’s defense were no longer capable of battle.  Further complicating matters, the governor of Arkhangelsk, Aleksey Prozorovsky, openly obstructed Cruys’ attempts at repair.  He maintained that even though Cruys had arrived in Arkhangelsk with the troops and the tools necessary to renovate the forts and ships, since he had not received personal orders from the Tsar to attend to the problems, he saw no reason for Cruys to bother.

Cruys nevertheless attempted to circumvent the governor by ordering his troops to begin work on the forts and ships immediately, but the governor sabotaged Cruys again by ordering the troops to perform only those tasks which Prozorovsky deemed necessary, and that all who ignored the governor’s orders should be flogged.  “Arkhangelsk is run by the governor,” he said. “Not by the vice-admiral.”  However, some basic fortifications and repairs were made, and after the personal arrival of the Tsar to oversee the progress in the end of May 1702, these repairs were greatly accelerated.

Cruys in the Netherlands

Shortly after overseeing the reconstruction the defenses around Arkhangelsk, Peter sent Cruys on a new important mission to the Netherlands.  Russia declared war on Sweden two years earlier to challenge it for control of the Baltics in the Great Northern War and in order to fight the Swedes, Peter knew he needed better trained officers and sailors.  Cruys’ mission on arriving in the Netherlands was twofold; first, on the authority of the Tsar himself, Cruys was to recruit and invite to Russia as many experienced military and naval officers as he could, and second, to find accommodations on Dutch vessels for 150 Russian youths who had accompanied him to the Netherlands, so they could receive better training and return to Russia prepared to handle the Swedes.

While the first part of his mission was successful (Cruys eventually returned to Russia with 450 people, including Vitus Bering and Andrey Osterman), the mission to train the Russian youths on Dutch ships became immediately problematic.  Cruys had arrived in the Netherlands too late in the fall; all the Dutch ships had been loaded up with equipment for the winter eliminating any free space they might have for the young Russians onboard.  Cruys, however, placed the young sailors on any ships he could, while writing the Tsar personally and asking that the remaining youths be sent to school at the expense of the Tsar.  Peter agreed to provide for the children.

The effect of the Dutch training would be seen later in the Great Northern War.  Charles XII of Sweden remarked at one point with great annoyance that “At the Muscovian fleet we saw nothing more Muscovian than the flags. We had to fight against a Dutch fleet, with Dutch commanders, manned with Dutch seamen and we were exposed to Dutch bullets, driven by Dutch gunpowder.”

Return to Russia and fate

Cruys returned to Russia in 1704 and oversaw a number of other projects for the Tsar, including the conclusion of the construction of the fort at Kronstadt.  However, even the vice-admiral’s reputation could not protect him from the Tsar’s ire on one fateful occasion.  In 1713, Cruys was leading a Russian squadron in the Gulf of Finland, with the Tsar under his personal command.  Noticing an enemy ship in their territory, Cruys gave the order to pursue.  However, two ships, the “Riga” and the “Vyborg” got caught in a sandbar, and the enemy vessel was allowed to escape.  Enraged, Peter sentenced Cruys to death, which was then changed to banishment to Kazan.  Cruys returned six years later in 1719, and was made vice-president of the Admiralty College, but his awards and full title were only returned to him after the death of Peter the Great.  He died two years after Peter with the rank of full Admiral in 1727.