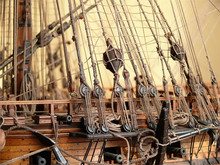 Ivan Botsis was a counter-admiral in the Russian navy during the Great Northern War with Sweden.

Botsis was originally from Greece, and was specifically recruited for his maritime experience by Peter the Great in order to serve as a ‘shautbenaht’, or counter-admiral in his galley fleet in the Baltic Sea.  Botsis’ tactical knowledge of galley combat, including ramming and boarding enemy vessels at sea proved invaluable in several key victories and the defense of St. Petersburg throughout the Great Northern War.

Historically, galleys were a type of naval vessel that were pioneered by the ancient Greeks for use in the Mediterranean Sea. They eventually proved popular worldwide due to their speed and tactical effectiveness in smaller bodies of water filled with islands, inlets, and coastlines.  Galleys were propelled by oars for maneuverability in battle, as well as sails for crossing long distances.  The ancient Greeks pioneered many advances in galley technology and strategy, eventually developing the ancient Greek “Trireme”, a galley with three levels of oarsmen for superior speed and maneuverability in close combat.  Galleys were also equipped with rams in order to disable enemy ships.  Galley combat strategy involved the use of several smaller ships in various formations using their explosive speed provided by the oarsmen to ram enemy vessels, punching holes in their hulls, or grazing enemy vessels along their broadsides in order to clip their oars, thereby hampering their mobility.  Galleys were also known to approach enemy ships in an attempt to board the vessel, and as such, galley sailors were also required to be experts in hand to hand combat.  Although oared ships and galleys continued to be used through the Middle Ages, by the 16th century they had mainly been replaced by sailed ships with better technology.  However, galleys would experience one last return to glory under Peter the Great.

At the start of the Great Northern War with Sweden in 1700, Peter realized that the geographical conditions of the Baltic Sea, replete with islands, inlets, and coastlines could potentially marginalize the combat effectiveness of the larger sailing battleships of the existing Russian fleet, and a solution was needed.  Peter knew that in order to win the war and control the Baltic, supremacy at sea was essential, and conditions in the Baltic were ideally suited to galley warfare.  Peter ordered the construction of a large galley fleet in order to provide tactical support to his larger warships in the area, while also functioning as an independent high speed strike force raiding enemy coasts and supply lines.   However, Peter was presented with a problem; he would require a commander for the fleet with experience in similar tactical and geographical conditions, and none of the Russian officers had any experience in galley sailing or strategy.  The solution was Ivan Botsis, hired to command the Russian galley fleet in 1702.

Ivan Botsis was a count and native of Dalmatia in what is currently Croatia.  Growing up as a sailor in the Adriatic Sea, Botsis was an expert in galley sailing and construction, and upon enlisting in Russian fleet, Peter immediately promoted him to the rank of shautbenaht (or counter-admiral) of the Galley Fleet, under the command of Vice-admiral Cornelius Cruys and Admiral Fyodor Apraksin.  He was immediately dispatched to the Russian shipyards at Olonets, his task being the supervision of the construction of the galley fleet and train its sailors.  By 1707, the Russian galley fleet was ready to join the Russian navy in the fight against the Swedes.

Raids along the Swedish Coast

Botsis’ fleet was immediately put to use, pushing the Swedish lines away from St. Petersburg and landing on Kotlin Island on April 30th 1708 in the Gulf of Finland.  The fleet then continued to raid the Finnish coast, successfully pillaging and burning several towns.  Prince Sherbatov, a Russian general mayor and military commander at the time wrote in his journal, “May 6th, Shautbenaht Botsis was sent to sea with 9 galleys and arrived on May 7th with his brigantines in Borga…the place was pillaged, with 300 courtyards razed, and several possessions plundered.  200 enemy combatants were killed, and 15 trade boats burned.”  Botsis was not finished, however.  On the 19th of June 1708, Admiral Apraksin sent Botsis with 12 galleys to raid Karelia.  Botsis returned on the 3rd of August, turning 500 villages to ashes and taking several prisoners.  Botsis would take part in many other campaigns as well; in 1710, he was able to command a fleet of 270 warships that broke through the ice in the Gulf of Finland and resupply the Russian forces laying siege to the city of Vyborg.  Botsis was never content with the conditioning of his sailors, petitioning Admiral Apraksin more than once for better officers and training.  As a result of his successes, he succeeded in winning the admiration and respect of the Tsar himself.  When Peter I married the Empress Catherine in 1712, Botsis performed the function of proxy father to the Tsar, along with Vice-admiral Cornelius Cruys.

Sweden, however, was not about to let the Russians gain such an easy tactical advantage.  Sweden would construct its own galley fleet, but it was the Russian galley fleet that would prove instrumental in two of the greatest maritime battles of the war; the battle of Gangut in 1714, and the battle of Grengam six years later in 1720.  However, Botsis would not live to see his galley fleet in its finest hours.  He died on May 18th, 1714, 3 months before the fatal battle at Gangut.  His fleet and his insistence on the best trained galley sailors proved to be the difference in helping Russia gain supremacy in the Baltic.

Count Montfort Count Montfort was a French nobleman who immigrated to Russia and served as the first tutor and governor to Aleksandr Pushkin, arguably the greatest Russian poet,

The Mons Family The Mons Family was a family of German immigrants living in St-Petersburg during the life of Peter the Great and greatly entangled in the affairs of the Russian court.