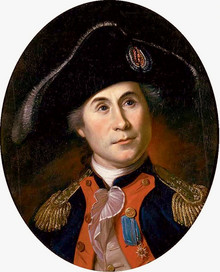 John Paul Jones was a naval commander and privateer, helping found the United States navy in 1775, and later serving as a rear-admiral in the Russian Navy under Catherine II in the Russo-Turkish war of 1787-1792. A forceful and successful captain, his impact on the history of the United States and Russia is still felt today, leaving behind the reputation of a stubborn and powerful commander, ready to face great danger in the pursuit of victory.

Early career, and journey to the Americas

Jones was originally born in Scotland, UK, and began his career as a cabin boy on smaller merchant and slaver ships that were used to transport slaves from Africa to the Americas. He progressed through the ranks quickly, but, disgusted with the slave trade, eventually gave up his command in Africa and sailed to the colony of Virginia. It was there that in 1775, with revolution ripe in America, he offered his services as a captain to the Continental Congress, which at that time had no naval forces of which to speak. As they desperately tried to assemble a rag-tag fleet with which to engage the British forces at sea, Jones was highly recommended by several members of the Congress, and was given command of a small vessel (the USS Alfred) to engage the British in the newly formed Continental Fleet.

Jones’ engagements in the Continental Fleet during the revolutionary war met with varying degrees of success, however, he was well known in England for his successful disruptions of shipping lines in the Irish Sea and constant raids along the coastline, sowing mayhem and panic among the English. Jones’ reputation grew to such a point where his capture would have meant certain and immediate death at the hands of the British. However, due to Jones’ daring tactics, he ensured that he himself was never captured, while at the same time managing to capture a number of British vessels. Jones’ position as a feared force upon the seas was secure.

Post-revolution and invitation from Catherine II

In 1785, the United States foreign minister Benjamin Franklin announced a ban on privateering, and John Paul Jones returned to his home in Paris, where (as an Enemy of England) he was loved and vaunted. In a strange turn of events, at the end of the Revolutionary War, the Continental Congress of the United States decided not to promote Jones to the rank of Admiral. Jones, being a well-known careerist, was hurt. At the same time, preparing for the forthcoming Russo-Turkish war and not having a significant fleet on the Black Sea, Empress Catherine II turned her attention to John Paul Jones. The Russian ambassador received an urgent order to recruit Jones to the Russian Navy. ‘This man,” she said “will enter Constantinople”. Catherine II had strict rules concerning foreigners in her armed services. Contrary to previous rulers, she discouraged foreign involvement, even going as far as to establish discriminatory rules for foreign officers – if they were to be transferred to Russia, they were immediately reduced in rank. However, Jones’ extraordinary reputation and ability forced Catherine II to break her own rules, instead promoting him to the rank of Rear-Admiral and giving him command of the flagship Vladimir. 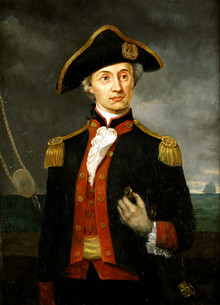 On April 23rd, 1788, John Paul Jones arrived in St. Petersburg, receiving the rank of Rear-Admiral from Catherine II herself under the name Pavel Jones. Under this name he arrived in Kherson in May of 1788, and was placed under the command of Grigory Potemkin, along Sidor Bely and Anton Golovaty. The American successfully threatened the Turkish navy near Ochakov, providing cover fire for the invading forces of Aleksandr Suvorov to land at Kinbern and lay siege to Ochakov. However, being a foreigner, he was constantly surrounded by suspicion, jealousy, and intrigues in which he refused to participate. As such, he found himself quickly out of favor with Potemkin, who lobbied for his removal behind the scenes. In one personal letter to the Empress, Potemkin wrote “Paul Jones let three Turkish vessels get by right under his nose. I ordered him to burn them, but he returned twice, afraid of the Turkish cannons. I then gave him the order to cease, and in turn gave the task to the Cossacks. Colonel Golovaty with 50 Kazakhs immediately succeeded in burning them.” Jones was eventually recalled to St. Petersburg under the ruse of being transferred to the Baltic Fleet. However, his career stagnated as accusations and attacks on his character continued from rival officers. Jones was awarded the Order of St. Anne on June 8, 1788, but was afterwards relieved of duty in the Russian Navy. He returned to Paris a changed man with deep feelings of betrayal.

Back in Paris, Jones was offered command of the Revolutionary Fleet, but was unable to accept. He died unexpectedly at the age of 45 in 1792. He was buried in Paris, but his body was moved to America in 1905 onboard the USS Brooklyn, which was escorted by a processional fleet. His life later became the subject of adventure novels by the famous authors James Fenimore Cooper and Alexandre Dumas.