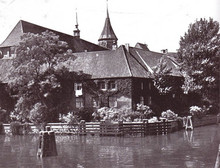 Backside of the Collegium Albertinum on Kneiphof island, where Kant taught. The quarter was destroyed in World War II.

Gottlieb Sigfried Bayer was a German historian and philologist who wrote prolifically and actively participated in the development of the Petersburg Academy of Sciences after his arrival in Russia in 1726.A student of several eastern and ancient languages including Chinese, Latin, Hebrew, and others, his articles on the origin of the Russian people written while he was in St. Petersburg gave rise to the infamous “Normanist Theory”, which immediately proved unpopular with several Russians and remains controversial today.

Gottlieb Siegfried Bayer was born on January 6th 1694 in the city of Konigsberg into the devout protestant family of Johann Friedrich Bayer, an artist.

In 1710 at the age of 16, Bayer was accepted to the Konigsberg University, and after one year was already giving lectures at his old Gymnasium in order to support his family.  He would lecture for seven hours on a daily basis, and then devote the rest of his day to his studies.  He showed an early interest in ancient history, biblical history, and eastern history, and greedily devoured the works of Aristotle as well as books on the Bible and Semitic languages.  By the time he finished his studies at the University he had a good command of the Latin, ancient Hebrew, and Chinese languages.

After he received his masters in Leipzig, he returned to Konigsberg and started his professional career as an academic.  He was named Librarian of the Alstadt City Library as well as the Dean of the Konigsberg Lectern, where he gave lectures on authors such as Antiphon, Terence, Cicero and others.  His literary work and his lectures were noted for their high energy.  By the time he left for Russia in 1725, he was already a well-known and highly respected academic in the field of ancient literature and history.

The Petersburg Academy of Sciences

Bayer was invited to the Petersburg Academy of Sciences in 1725, and was given the choice of which academic department he wanted to teach in due to the breadth of his studies and experience in Konigsberg.Bayer chose to work in both the faculties of ancient history and eastern languages, and signed a contract granting him 600 rubles a year in pension, as well as a state-owned apartment.

Upon his arrival in Russia, it was clear that Bayer was nothing short of a voluminous worker.During the course of his twelve years in Petersburg, he composed several large books as well as a number of articles on a variety of topics, mostly dedicated to ancient history.

The Normanist Theory, and legacy

Bayer’s most significant contribution however, was perhaps his most controversial one.After embarking on a history of the Russian people, using his skills as a philologist and natural historian, Bayer set about writing a paper on the origins of the Russian people, drawing largely from an analysis of literature provided to him in Latin, as well as rough translations of the “Primary Chronicle”, the earliest written account of the Russian people, starting at around the year 882.Bayer’s theories essentially laid the foundation for what was to become known as the “Normanist Theory”.According to the theory, there were a number of Slavic tribes living in what is current day Ukraine which had been conquered by a larger Varangian Norse tribe from the area of Sweden, called the Rus’.  Refusing to pay the Rus’ tribute, the Slavic tribes beat back the Rus’, returning them to the north.  However, it was not long before the Slavic tribes went to war against each other. According to the theory, due to the utter lawlessness and confusion between them, they asked the Rus’ to return and govern them.  The Rus’ returned, and united the tribes into a polity called the Kievan Rus’.As the Kievan Rus’ would eventually develop in the Duchy of Moscow and then the Tsardom of Russian, Bayer further suggested that the royal family was therefore logically descended from the Rus’ tribes.  Bayer’s conclusions gave rise to utter shock and outrage from many of his Russian colleagues, including Lomonosov and Ivan Schumacher, the head of the Academy, who found it impossible that the Slavic tribes (or Russians) after defeating the Norse Varangian tribes would then go as far as to invite them to return.  Furthermore, they accused Bayer of errors in his work and translation, pointing out that Bayer, for all of his skill as a linguist never learned the Russian language.The theory remains hotly debated to this day, and while it has gained more acceptance with contemporary historians, it was essentially dismissed as nonsense by Soviet historians for several years.

Bayer’s research into the KievanRus’would ultimately be the beginning of the end of his time at the Petersburg Academy of Sciences.  Constantly in conflict with Schumacher, Bayer planned to return to his home of Konigsberg and applied for release in 1737.  However, he would never return.  Bayer fell ill and died in St. Petersburg on February 10, 1738 at the age of 44.