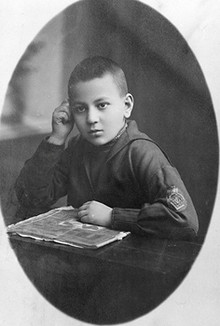 Mstislav Keldysh at the age of 9.

Mstislav Keldysh was born in 1911 into a family of Russian nobles in Riga. His grandfather, Mikhail, was a military physician who held the rank of general. Keldysh’s grandmother, Natalia, was a cousin of the famous Russian general Aleksey Brusilov, who masterminded the famous Brusilov Offensive during WW1. Keldysh's father, Vsevolod, was a major-general in the Russian Imperial Army, who, after the 1917 Bolshevik Revolution in Russia became a professor at the Academy of Military Engineering. He authored a theory of concrete reinforcement that was later used in the construction of the Moscow River Channel and the Moscow Metro.

Because of his family background young Mstislav was presented with many opportunities to study and he used them to the fullest. Keldysh never tried to cover up his origins – even in the 1920s he always claimed he was a descendant of Russian nobility – a brave move at that time.

At the age of 17 Mstislav entered the Department of Physics and Mathematics of the Moscow State University. He received a degree in engineering in 1931. His tutor, academician Mikhail Lavrentyev, recommended the young student for work at TSAGI, the Central Aerohydrodynamic Research Institute near Moscow.

Immersed in the world of science

Keldysh’s first scientific research was devoted to “flutter” – a term used to define the potentially destructive vibration of an airplane wing that happens due to the collision of aerodynamic forces with the vibration itself and can lead to a plane crash. All planes built in the 1920s suffered from this serious drawback. 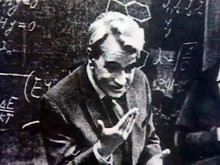 Mstislav Keldysh was the first scientist to find a solution to this problem, producing formulae to completely eliminate the possibility of flutter during all stages of flight. He was highly praised by his chief, the prominent Soviet physicist Sergey Chaplygin, who suggested putting these theories to the test. However, it took the young scientist a while to continue his studies due to family circumstances.

In the mid-1930s several members of the Keldysh family became victims of political repressions during the years of Stalin’s purges. Keldysh’s uncle was sent to a labor camp to build the White Sea - Baltic Canal in the northwest of the USSR. In 1935 Mstislav’s mother was also arrested but the NKVD (the predecessor of the KGB) did not find any evidence against her and after a few weeks she was released. In 1936 the NKVD arrested Keldysh’s brother Mikhail, a historian specializing in medieval Germany. He was executed a year later on espionage charges. Another of Keldysh’s brothers, Aleksandr, was also accused of spying in 1938. This time the NKVD found him guilty of spying for the French. But a lucky coincidence helped Aleksandr avoid a terrible fate. The NKVD leadership was changing at that time so nobody had time to handle Aleksandr’s case and eventually he was pardoned.

Perhaps Mstislav wouldn’t have made it through this dreadful time, if it hadn’t been for his elder sister Lyudmila, who supported him throughout the turbulent years. She was also his first math teacher and constantly encouraged the young scientist to continue his studies.

The science that wins

In 1938, when Keldysh was just 27, he became a Doctor of Science. Eventually he applied his mathematical analysis skills to a practical field – hydro and aerodynamics. In particular, one of the main problems in aviation in the 1930s was auto-oscillation, or the “flutter” effect, which occurred unexpectedly whenever planes picked up speed. Keldysh found a way to solve the problem, which was a huge leap for the Soviet aircraft construction industry before the onset of World War II.

Keldysh continued to work at TSAGI during World War II after the entire institute was evacuated to the city of Kazan on the Volga River. Keldysh’s wife and two children accompanied him. Here he concentrated on the practical side of aircraft production. Mstislav inspected factories producing warplanes to make sure they would not have any plausible faults, including flutter. The government highly appreciated his work and in 1942 Keldysh was awarded the Stalin Prize for his studies of the physical causes of plane destruction.

However, there was another aspect to be researched. Keldysh wanted to find the reason for fluctuations of the front chassis known as “shimmy.” He believed that some of the wheel movements resembled a popular American dance of the 1920s. As a result of these studies, several changes were made in the chassis design to make it more stable. By the end of the war it became known that 160 airplane crashes of German planes were caused by the “shimmy effect.” None of the Soviet fighter jets experienced this problem thanks to the implementation of Keldysh’s ideas. This work brought him several awards from the Soviet government, including the Order of the Red Banner of Labor in 1944, the Order of Lenin in 1945 and a second Stalin Prize in 1946.

Keldysh was also awarded the medal “For the Defense of Moscow” in 1944 – as an expression of gratitude to Keldysh who had been a valuable advisor concerning the improvement of the planes engaged in the defense of Moscow. Many prominent Russian constructors, including Aleksandr Tupolev, put Mstislav Keldysh’s fundamental research into practice.

The man who calculated the route for the rocket

In 1946 Mstislav Keldysh became a full member of the Soviet Academy of Sciences. At the same time the government set another important task for Keldysh who by then had managed to form a unique group of mathematicians to handle nearly all the major scientific projects of the Soviet Union.

His bureau was in charge of most of the computing for the Soviet nuclear program. According to academician Mikhail Vinogradov, “Keldysh could easily apply all his potential and knowledge to any type of research in various fields.” Some of Keldysh’s data was later used in the design of the first Soviet computers at the end of the 1960s.

All these tasks required the utmost degree of secrecy. The scientific groups were renamed several times. Keldysh focused his studies mainly on jet propulsion and supersonic gas dynamics, resulting in a successful test of the first Soviet cruise missile. According to the main characteristics, it was better than its US analogue “Navajo” designed in the United Stated in the mid-1950s. For this work he was awarded with his first Hero of Socialist Labor star and another Order of Lenin, of which he would receive seven by the end of his career.

At the same time Keldysh was conducting research to put the first artificial satellite in the Earth’s orbit. The study began in 1954 when rocket engineers Sergey Korolyov and Mikhail Tikhonravov asked the Soviet government to support the implementation of space flights. In 1956 Keldysh headed a special commission at the Soviet Academy of Sciences that coordinated the launch of the first artificial satellite scheduled for 4 October 1957.

Keldysh enjoyed immense popularity and authority in the scientific world as well as deep respect from leading scientists of his time. Thanks to this, he was able to gather together a group of like-minded colleagues, who successfully put the first satellite, Sputnik, into the Earth’s orbit right on schedule.

After the first manned flight to space performed by Yury Gagarin in April 1961, Keldysh was awarded with his second Hero of Socialist Labor star. Three months later he became the chairman of the Soviet Academy of Sciences.

Keldysh was exceptionally valued by his contemporaries and fellow scientists, who thought he was worth his weight in gold and even called him the “head of diamond.” It might as well be true because no one could stand in competition with the simplicity and practicality of Keldysh’s approach to science.

Aleksey Leonov, the first man to walk in open space, recalls an incident that reveals the essence of Keldysh’s genius: “I was at the Baikonur station watching the launch of a space shuttle. There was some error in its orbiting trajectory, so calculations were necessary to determine how many correction points would be needed. The head of the launch assigned the task to his assistant to calculate on the computer. While he was away, Keldysh got out his pack of cigarettes, scribbled something on it with a pen, and in less than a minute quietly said, ‘twenty corrections.’ The head of the launch glanced at him, but didn’t say anything. About half an hour later, his assistant came out of the next room. ‘So, how many correction points do we need to consider?’ asked the chief. ‘Twenty,’ was his assistant’s answer.”

During his 14 years as president of the Russian Academy of Sciences Keldysh managed to reorganize the country’s leading research institution. He made a significant contribution in boosting the revival of genetics and cybernetics – areas of science condemned as “harmful” and “hostile” by the authorities and therefore banned from further development in the mid-1930s. He strongly opposed the authorities’ intentions to punish Andrey Sakharov, “the father of the Soviet hydrogen bomb,” who by that time had already began his human rights activities.

Keldysh contributed to the activity of the first and only Soviet shuttle, Buran. He always encouraged new endeavors in various fields – from microbiology to nuclear physics. In 1971 he received his third Hero of Socialist Labor star – a rare occasion at that time. 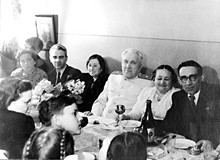 In the 1970s Keldysh’s health began to deteriorate. Leonid Brezhnev, the then Soviet leader, did his best to help the academician. He invited a prominent surgeon from the United States, Michael DeBackey to perform a unique heart surgery (DeBakey also consulted on a heart surgery for the first Russian President Boris Yeltsin in 1996). However, Mstislav Keldysh’s emotional state was also deteriorating. He felt that the time had come to retire and he did not want to become “a puppet scientist” who would lead the Academy. In 1975 he submitted his resignation.

In the following years Keldysh suffered from depression. It may come as a surprise to many, but he felt dissatisfied with all the research he had done. Mstislav Keldysh died under mysterious circumstances on 24 June 1978. Eyewitnesses say that he entered his garage and started the engine of this car with the garage door closed. According to the official statement, his heart failed right at that moment. However, some of his close friends were sure it was suicide. But even now it is not clear why the most prominent Soviet scientist would have decided to take his own life.

The Soviet government gave him a state funeral. He was buried inside the Kremlin wall – a huge honor granted to the most prominent citizens of the USSR. But for many Mstislav Keldysh remained a true representative of the Russian intelligentsia – he never bothered about privileges, could stand in hour-long lines to get tickets to the Boshoi Theater and never exploited his fame and rank. Friends of Keldysh remember him as a man of liberal values.

Aside from the world-famous scientific research vessel, a crater on the moon and the minor planet 2186 also bear his name.