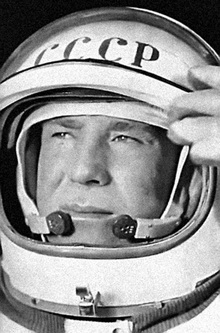 Aleksey Leonov was born on 30 May 1934 in the small village of Listvyanka 600 kilometers north of the city of Kemerovo in the southeast of Western Siberia. The ninth child in his family, Aleksey revealed his interest in arts and aviation at an early age. In 1936 Aleksey Leonov’s father became the subject of repression, but was rehabilitated in 1939. The family moved to Kemerovo and then to Kalinigrad, where Leonov’s relatives still reside. In 1953 Aleksey graduated from high school. By that time he had achieved good results in his studies. In addition, he had made achievements in sports and knew much about aircraft. Thanks to his elder brother, who was an aviation technician, Aleksey Leonov learnt about aero engines, aircraft construction and even flight theories. That was enough to enter the aircraft college, the school Leonov had dreamt of since childhood. In 1955-1957 Aleksey studied at the higher specialized school for fighter pilots in Ukraine. After graduation he enrolled in the fighting squads and proved himself a very talented pilot. In 1960 Aleksey Leonov passed the necessary tests and was enlisted into the cosmonauts’ detachment. It was a very high honor since the profession of cosmonaut ranged among the most privileged and respectable in the Soviet Union.

In 1960-1961 Leonov studied at the cosmonauts’ training courses. On 17 March 1965 Aleksey Leonov was appointed co-pilot on the “Voskhod-2” (“Sunrise-2”) mission. The spaceship, with two cosmonauts on board, left for outer space and remained there for 1 day, 2 hours, 2 minutes and 17 seconds. It was an historic mission: for the very first 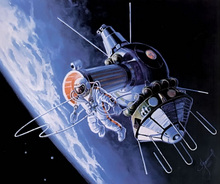 time a human being dared to leave the spacecraft. Aleksey Leonov left the spaceship for 12 minutes and 9 seconds. The event was absolutely unprecedented. Upon trying to return on board the spacecraft, Leonov realized his spacesuit had become inflated, so he couldn’t enter the spaceship. But he didn’t panic. He managed to open a valve lowering the suit’s pressure. Finally, Leonov found himself on board. Still, it wasn’t the end of the mission’s troubles. Before landing, the navigation system of the spaceship stopped working. The spacecraft landed 180 kilometers to the north of the city of Perm, in impassable taiga. The cosmonauts spent two nights in a deep forest and in a terrible frost. Only on the third day a group of rescuers discovered the cosmonauts. Despite all the troubles of the mission Aleksey Leonov made the shortest and the most optimistic report in the history of cosmonautics: “It is possible to survive and work in outer space.” These words started a new era in human activities in the cosmos.

For his successful mission, lieutenant colonel Aleksey Leonov was given the rank of “Hero of the Soviet Union” on 23 March 1965. He was also awarded the Order of Lenin and the “Golden Star” Medal.

In 1965-1967 Leonov served as a superior instructor, a cosmonaut and a space pilot. In 1968 he graduated from the Air Force Engineering Academy. In 1967-1970 he was responsible for the Moon Mission preparation and hoped to be among the first men to set foot on the surface of the moon. The mission never happened though. 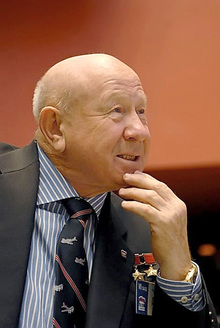 On 22 January 1969 Aleksey Leonov nearly became the victim of an assassination attempt on the leader of the USSR, Leonid Brezhnev. Leonov and three other cosmonauts were in a governmental car that was fired upon. The shooter confused the cars. The driver was killed, but the cosmonauts survived.

In July 1975 Aleksey Leonov took his second trip to outer space. It was the first joint mission between the USSR and the US. Leonov was the commander of the Soviet spaceship “Soyuz-19.” The so-called “Apollo-Soyuz space project” was both a scientific and a symbolic mission. It allowed the testing of important systems of American and Soviet space technology synchronization and reinforced “détente politics” and cooperation between the USSR and the US. The mission was successful and lasted for 5 days, 22 hours, 30 minutes and 51 seconds. Major-General Aleksey Leonov was awarded with his second “Golden Star” Medal and his second Order of Lenin. He was also given the rank of “Hero of the Soviet Union” for the second time.

In 1976-1982 Leonov became Deputy Director of the Cosmonaut Training Center named after Yury Gagarin. He was also an editor of the cosmonaut newspaper “The Neptune.”

Retired in 1991, Aleksey Leonov still leads an active life. He is the vice president of a Moscow bank and an advisor to the First Deputy of the Board. He also enjoys painting. There have been several exhibitions of his works, including those drawings he made during his trips to outer space. Leonov is the creator of over 200 paintings. He has been a member of the Artists’ Union since 1965.

Aleksey Leonov is freeman of over 30 cities of the world. His name was given to a moon craters. He is a laureate of a number of governmental and scientific awards and prizes. Several streets and schools in Russia bear Leonov’s name and monuments to the cosmonaut have been erected in Moscow and Kemerovo.

Aleksey Leonov is married and has two daughters. Currently he and his family live in Moscow. On 30 May 2009 the Russian President Dmitry Medvedev congratulated Aleksey Leonov on his 75th birthday.