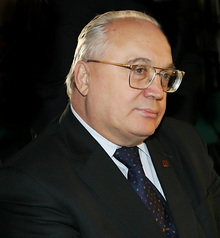 Viktor Sadovnichy is a vice-president and a full member of the Russian Academy of Science and Rector of Lomonosov Moscow State University.

A Doctor of Physics and Mathematics, Professor Sadovnichy is a renowned specialist in mathematical modeling and mathematical theory of complex systems and the author of more than 300 publications and textbooks. His works provided the basis for the first ever simulation of the zero gravity phase of aerospace flight. Since 2002 he has been a member of the United Russia Party and of a number of Presidential Councils, including the Presidential Councils for Science, Technology and Education (since 2004) and the Presidential Council for the Implementation of Top-priority National Projects and Demographic Policy (since 2005).

Sadovnichy is the recipient of many Russian and foreign awards, among them the USSR State Award (1989), the Russian Federation State Award (2001), Orders for Service to the Fatherland of 2nd, 3rd and 4th degrees, the Order of Diplomatic Service Merit (Korea, 2004) and the Order of the Legion of Honor (France, 2005).

Viktor Sadovnichy was born in Krasnopavlovka village, Kharkov Region (a territory of modern Ukraine) into a family of rural workers. “When I was a child I wanted to work in agriculture. I wanted my job to be connected with forests and fields. But, of course, my first dream was to become a pilot. However, when I was in the 8th or 9th grade, I saw a message about the MSU on television and was considering trying to enter it but I was sure then that it would be impossible,” he says. Indeed, nobody could believe that a boy whose parents could not even read or write would have a great future in science.

Meanwhile, his family suffered difficult times. Viktor Sadovnichy had to earn money himself and in 1956 he went to Donbass where he started his working life at the age of 17. He found a job as a loader and timberman at the Komsomolets mine (Gorlovka, Donetsk Region). There he also attended lectures for young workers at a night school.

In spite of Viktor Sadovnichy’s conviction that it would be impossible to enter the Moscow State University, his wish to study there was to come true. While working in the mine Viktor had already sent documents to the Belarusian agriculture academy. But the manager of his section said that he was going to enter the MSU Law Faculty and advised Sadovnichy to try and pass exams, too. He even helped Viktor send documents to the MSU and in 1958 Viktor became a student of the main university of the country. In fact, he was well prepared for the exams: “I had a very good teacher of mathematics, a dedicated specialist. We solved problems that were included in the MSU entrance examinations. I was lucky,” says Sadovnichy.

In 1963 Viktor Sadovnichy graduated from the MSU Faculty of Mechanics and Mathematics. Since then his life has been inseparably associated with the University: post-graduate student, assistant lecturer, assistant professor, professor, Academic Research Deputy Dean at the Mechanics and Mathematics Faculty (1972), the Chair of the Functional Analysis and its Applications at the Faculty of Computational Mathematics and Cybernetics (1981–1982), incumbent of the Chair of Mathematical Analysis of Mechanics and Mathematics (1982), first incumbent Prorector (1980–1982), Prorector for Academic and Research Activities of Natural Science Faculties (1982–1984), first Prorector (1984–1992). Finally, in 1992 Viktor Sadovnichy became the 44th Rector of the MSU. He was chosen in the first democratic rector elections in many years by the MSU Council of Academic Councils. Since then he has been reelected three times - in 1996, 2001 and 2005. In 1994 Sadovnichy became the President of the Russian Union of Rectors, uniting up to 700 Russian universities and other higher educational institutions. In 1997 he headed the Eurasian University Association. 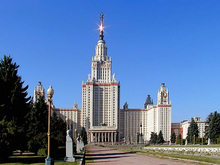 Viktor Sadovnichy admits that he did receive attractive job offers from outside the MSU, promising a very good political career or work in foreign universities. After obtaining his Ph.D. he almost left for one of the universities abroad, which would have allowed him work in the Middle East and Italy. However, he always chose his alma mater. Even when in 2003 he was elected to the State Duma in that year’s Russian parliamentary election, Viktor Sadovnichy, by that time a member of the United Russia Party, as usual decided to stay in the MSU.

In spite of many accusations of corruption and self-dealing Viktor Sadovnichy is credited with the MSU being granted the status of Russian self-governing (autonomous) higher education facility in 1992, which gave the institution independence in educational, scientific, financial, business and other activities while maintaining government financing. This was instrumental for the university’s survival during the difficult times of reform and transition. Viktor Sadovnichy is also considered one of the lobbyists who pushed for the MSU to become a Federal University in 2007, a status that implies “maximum commercial and educational freedom and a higher level of financing.” Many positive changes have taken place in the MSU under Sadovnichy’s leadership of - 15 new faculties, four new campuses and 100 new professorates in promising research areas have been opened, the Innovation-Technological Center “MSU Science Park” was created in 1992 and the Institute of Complex Systems Mathematical Research was opened 1995. 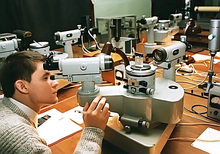 MSU representative offices have been set up in China, the United States and Switzerland. The new MSU Fundamental Library was built in 2005 and the Medical Research Center in 2008. But Viktor Sadovnichy also attaches great importance to the restoration of MSU traditions - under his leadership the Faculty of Fundamental Medicine was recreated in 1992, the Academic-Research Museum of MSU History was created in 1993, the tradition of celebrating Tatyana’s Day in January was returned to students and teachers and the St. Tatiana Chapel was reopened in 1995.

Viktor Sadovnichy is a notable expert in the areas of mathematics, mechanics and computer science. In 1967 he received a candidate degree in Physics and Mathematics, in 1974 – a doctorate degree. The next year, at the age of 36, he became the youngest professor at the MSU. Sadovnichy has proved final results of the theory of differential operators’ traces and made important findings in mathematical justification of some approaches in relativist gravitation theory. Under his supervision a number of mathematical methods of space information processing have been developed, stimulating advancements in the area of deciphering space surveys. Viktor Sadovnichy is the author of unique developments in mathematical support for simulators, which allowed for the imitation of the zero gravity phase of aerospace flight on Earth for the first time in history. These simulators have been used in pre-flight training by Russian and foreign astronauts. 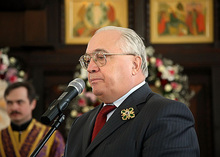 In 1994 Sadovnichy became a corresponding member of the Russian Academy of Science, in 1996 - a member of the Academy’s panel, in 1997 - its full member, in 2008 - one of its vice presidents. In 1995 Sadovnichy, together with the Nobel prizewinner Ilya Prigozhin, created and headed the MSU Institute of Complex Systems Mathematical Research which aims is to develop Prigozhin’s theory of complex, open, non-equilibrium systems and mathematical methods of operating complex biological and social systems. At the moment Viktor Sadovnichy is a member of many Russian and foreign scientific academies and is on the editorial boards of many leading Russian and international academic journals on mathematics and computer science.

But Viktor Sadovnichy has not only been occupied with scientific research and organizational work; he has also been passing on knowledge to others. He has been teaching “Mathematical Analysis,” “Functional Analysis” and other basic courses in mathematics at the MSU for over 30 years. Also, since 1967 he has been running the Moscow seminar on spectral theory. Viktor Sadovnichy says that a real pedagogue cannot live without constant practice. Under his supervision over 40 masters and eight doctoral dissertations have been defended.

He is known as a fierce opponent to the Unified State Examination reform in Russia and to Russia’s accession to the Bologna declaration, believing that the introduction of new standards to the educational system would destroy existing academic schools. “One mustn’t copy anything. We must go our own way, as we have a very rich past and traditions,” he says. Due to pressure from Viktor Sadovnichy and other rectors, the law on the Unified State Examination was corrected so that some universities, first among them the MSU, can admit students according to other procedures besides the Unified Examination, for example according to the results of national academic competitions.

Viktor Sadovnichy has held his post of the MSU Rector for over 16 years. His predecessor, Anatoly Logunov, had been MSU Rector for 25 years. The only limit to holding this post is age. According to Russian law, a person over 70 cannot occupy the post of the MSU Rector. Viktor Sadovnichy turned 70 on 3 April 2009 and there was uncertainty as to whether he would keep his post. There were even reports of an alleged successor - the Russian Education and Science Minister Andrey Fursenko. However, Sadovnichy remained in his office; when he was elected in 2005 he was granted powers for a five-year period that ends in 2010. 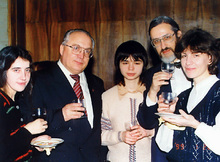 In 2008 the post of MSU president was created by a government decree, which was allegedly designed specifically for Viktor Sadovnichy when his term of office expires.

Viktor Sadovnichy says he keeps fit thanks to a strict schedule and everyday walks before sleeping. He is regularly seen in Moscow theatres and is friends with stage director Oleg Tabakov and conductor Valery Gergiev.

Viktor Sadovnichy is married. His wife, Natalya Aleksandrovna Sadovnichaya, was his fellow student at the MSU. They have three children. All of whom - son Yury and daughters Inna and Anna - graduated from the MSU Faculty of Mechanics and Mathematics, like their parents.