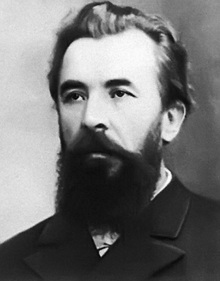 Nikolay Sklifosovsky was a well-known Russian surgeon, who loved his job so much he could actually spend up to 50 hours at the operating table without sleep, rest or food. His talent was recognized quite early – he was only a little over forty when his name began to be pronounced with awe and admiration throughout the world.

Nikolay Sklifosovsky was born on 25 March 1836 in a small village in the south of Russia; he was the ninth child in a family of 12. The family wasn’t particularly well-off. Nikolay’s father was an orderly room clerk and it was so difficult to support and nurture such a large family that it was decided that Nikolay would be better off in an orphanage in the city of Odessa.

His sad childhood and lack of friends made small Nikolay take an interest in science – at the gymnasium where he studied he was considered one of the best students and was even granted a silver medal, which helped him to enter the Moscow State University.

His studentship turned out to be as miserable as his childhood: Sklifosovsky lived on a scholarship and often went without food. In 1859 he graduated from the university with honors and moved to Odessa to work.

1859 was an important year in the life of the future surgeon – he became an attending physician in the surgery department at Odessa’s central hospital and started to earn money and gain experience. He even rejected a posting as chief doctor – Sklifosovsky was after experience and knowledge, not fame and regalia.

In 1863 the renowned surgeon presented his thesis entitled “A hemal parauterine tumor”; it was a great success and three years later Sklifosovsky set off on a business trip to attend advanced training courses. During the next two years he worked in Germany, France, England and Scotland, where he studied foreign approaches to operating oophoritic cysts and cerebral fungi. Sklifosovsky also had an opportunity to take a very close look at military medicine: with permission from the Austrian government he took part in the Austria-Prussian war of 1866 working in sick quarters and field dressing stations.

Over time, his name became increasingly famous in medical circles – in 1870 upon the recommendation of Pirogov (a prominent Russian scientist, doctor, pedagogue, public figure, founder of field surgery and one of the first surgeons to use ether as an anesthetic), Sklifosovsky was offered the surgery department chair at the Kiev University. A year later he was summoned to Saint Petersburg, where he was asked to teach surgical pathology at the Medico-Surgical Academy (which at the time was the only educational institution where military medics were taught) and in 1878 he became head of the surgical clinic. In Saint Petersburg he wrote and published several works and became one of the best-known and talented surgeons in Russia.

In 1876 Sklifosovsky went off to another war, this time to Chernogoriya, where he served as a surgery aid for the Red Cross.

In 1877 he took part in the Russian-Turkish war; he worked in sick quarters, strapped up the wounded and performed operations in the field, working side by side with Pirogov. On some occasions Sklifosovsky worked for 70 hours without sleep and rest. His wife Sofia never left her husband - they worked side by side wherever Sklifosovsky was summoned (Sofia was a nurse). According to some reports, during the war Sklifosovsky had to treat, strap up and operate nearly 10 thousand wounded. 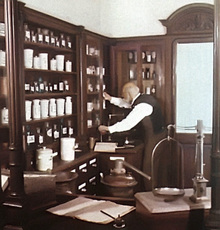 In 1880 Sklifosovsky was appointed first head of the surgical department of the Moscow University and then dean of the same department. For the next 14 years Moscow became Sklifosovsky’s home and the University – his favorite place of work. Agreeing to be dean of the university was a courageous step as at the time the institution was in an awful condition, but Sklifosovsky turned it into one of the best medical establishments not only in the country, but in Europe. Sklifosovsky was one of the first surgeons to treat medical instruments and bed sheets with high-temperatures, which greatly reduced the risk of complications in post-operative patients. Soon the clinic was surrounded by a small campus.

After the Moscow period Sklifosovsky moved back to Saint Petersburg where he lived for another 10 years teaching practical surgery; his courses attracted hundreds of young and experienced doctors from all over.

In 1902 he resigned due to a serious illness and moved to his country estate. Sklifosovsky used to spend summers here when he was younger, but had avoided the place since his first wife, aged 24 at the time, and three children died there of typhoid fever. 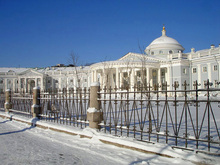 A series of apoplectic seizures caused the death of the surgeon – he died on 30 November 1904 and was buried in a place where the Poltava battle once flared up. A well-known Institute of Emergency Services in Moscow was named after Sklifosovsky, which nowadays is known simply as Sklif.

Sklifosovsky kept up with the European medical achievements: he tried to perform plastic surgery and promulgated the methods of antiseptics and aseptics.

Sklifosovsky was a public figure as well: he took an active hand in convening meetings of Russian surgeons. Apart from that, he was a chairman of an international Doctors’ Congress that took place in Moscow in 1897. Neither did Sklifosovsky forget about specialist literature: he was co-editor of a medical magazine “The Surgical Chronicle” (the first magazine for surgeons ever to be published in Moscow) and the founder of another magazine, “The Russian Surgical Archive.” In total he wrote more than 70 articles on surgery that became the basis for a new era of surgery in Russia. 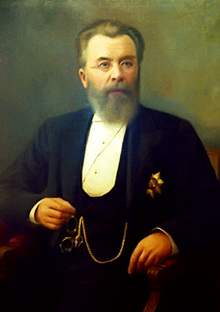 Sklifosovsky and his wife Sofia formed a hospitable and open couple – their house was often visited by Tchaikovsky (the famous Russian composer), Vereschagin (a well-known artist), and Koni (a renowned lawyer of the time). Sklifosovsky and his wife, both having received a brilliant education, had vast interests that were not limited to medicine: Sklifosovsky loved painting and art and was interested in literature and music. His wife was an international Vienna music contest laureate and their daughter Olga was a talented musician.

Sklifosovsky was a true gentleman – no one could remember him losing his temper, he tried to stay calm irrespective of the situation. The great surgeon, though, was a very emotional person: he remembered that when he witnessed his first operation performed without chloroform, he fainted.

Sklifosovsky was extremely shy – he hated being praised and tried to avoid honors in any form.