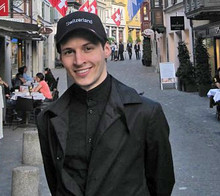 Pavel Durov is a programmer and a successful businessman who founded the largest social network in Russia’s “.ru” internet domain, VKontakte.ru (or “In Touch”).

Pavel Durov was born in St. Petersburg, but spent most of his childhood in Italy, in the city of Turin. His father Valery Durov (who holds a Ph. D. in Philology) was working there. He went to an Italian elementary school, and after returning to Russia attended the Academy Gymnasium in St. Petersburg.

After school, Durov followed in his father’s footsteps. He attended the philological department of St. Petersburg State University and was preparing to become a translator. While studying, he created an online-library for his fellow students to help them share books and notes. All of a sudden, his invention became popular all over the University. Encouraged by this success Durov expanded by launching a University forum. Maintaining and developing it, he came up with the concept of a student social network.

In 2006, the Delovoy Peterburg newspaper ("St Petersburg Business") published an article about the University forum, and Durov's former classmate Vyacheslav Mirilashvili accidentally happened upon the article. In those days, Mirilashvili was living in the USA and like many other American young people was watching the development of Facebook. He estimated the potential of Durov’s project and immediately went searching for Durov’s address. 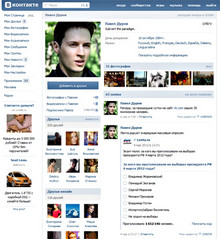 The reunited classmates decided to position the new network as a great tool for finding former schoolmates and long-lost childhood friends. Mirilashvili’s father funded the project, and in November, 2006, registration on VKontakte was opened. By the end of 2007, 3 million users had joined. People appreciated the friendly interface and the great variety of games and applications. Originally, VKontakte was supposed to be a network for students, but soon, the students' parents, younger siblings and even grandparents began to fill in VKontakte registration forms.

VKontakte is often compared to Facebook. There is a certain resemblance, and Durov does not deny it. For example, the blue and white color theme of VKontakte brings Facebook to mind, and so does the system of “likes”: on both sites anyone can express their opinion about any post or comment by hitting the “like” button. But there are many differences between these two networks, and the most important one lies in their attitude towards copyright laws.

There are several laws against online piracy in Russia, but the majority of Russian citizens hardly believe in their existence. If you ask any Russian Internet user what was the last movie or album he bought, he would most likely laugh. Why spend money on something you can download for free from online file storage or using a torrent tracker?

In 2010, the Recording Industry Association of America ranked “VKontakte” as the number two illegal distributor of music worldwide. In 2011, the Office of the United States Trade Representative named VKontakte among the most significant pirate databases. Some of the copyright holders attempted to sue the network or some of the users, but all the attempts were fruitless. Durov himself is known to believe in the freedom of sharing and to support piracy. 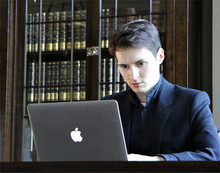 On December 4, 2012, the Russian State Duma elections took place. The ruling party won, but numerous violations of the election process were recorded on camera phones by voters and observers, and as a result the fraud stories and videos flooded the internet, inciting the appearance of many opposition groups in social networks.

A couple of weeks later, the Federal Security Service (or FSB) addressed Pavel Durov, asking him to block seven such groups on his social networking site. The photo of the letter was posted on Durov's page, together with his response: a picture of a dog sticking out its tongue. After his refusal to comply, Durov was summoned to the office of the general prosecutor to testify, but came out of the battle unscathed.

Until 2012, Pavel Durov avoided becoming a public person. He did not join any IT conferences, did not appear on TV, and it was impossible to find an interview or any video with him. Things changed on January 24, 2012, when Durov attended the Digital Life Design conference in Munich, Germany. There he made an impressive gesture: after a brief report about social networks in Russia, he donated 1 million dollars to Wikipedia.

Nowadays, according to the meter on the site, more than 165 million people are registered on VKontakte.