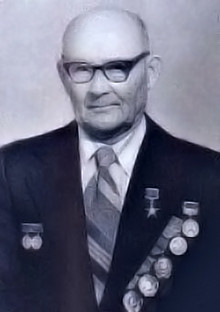 Nikolay Makarov is a gun constructor and inventor of the Pistol of Makarov (or simply the “Makarov”). The abbreviation PM designates one of the most simple and easy-to-use handguns. Though having earned popularity through his invention, Makarov was not a public man. His biography is a mystery to many Russians – unlike that of another prominent gun constructor, Mikhail Kalashnikov.

From math to machine guns

Nikolay Fyodorovich Makarov was born in 1914 in the region of Ryazan – 100 miles southeast of Moscow. His father was a railway worker. The family could barely make ends meet, as after the Russian Civil War of 1918-1922 the area they lived in was in ruins. At school little Nikolay showed his striving for knowledge – he was especially good at math. After finishing five grades he entered a vocational school to become a railway worker – jut like his father.

Having completed his studies, he returned to his native village of Sasovo – by that time it had grown big enough to become a town - where he worked as a mechanic at the depot of his father to the surprise to his fellow students, many of whom went to Moscow in search of better luck. But Nikolay’s longing for studies prevailed again. At the age of 22 he entered the Mechanical College in the city of Tula, one of the key areas for metal manufacturing and weapons production in the country.

Makarov did not finish his final college research paper– after WWII broke out, he was given the degree of an engineer and sent to a factory not far from Moscow. When Nazi troops came close to Moscow his plant was evacuated to the township of Vyatskie Polyany, about 700 miles northeast of Moscow. Makarov spent many years at the factory churning out PPSh submachine guns with a round magazine. He started his career as a workmaster but was soon promoted to the position of chief designer. He worked under the supervision of the PPSh’s creator and one of the greatest Soviet firearms designers, Georgy Shpagin. Later Makarov confessed that he considered Shpagin a great source of inspiration.

In 1943 Makarov was allowed to finish his final college paper. However, he decided to not to finish what he had previously started – instead Nikolay began to work on the design of a machine-gun. Makarov’s design was well received by academics. However, it never saw the light of say as production of a new PPSh machine gun was already in full swing at the end of the WWII. But this did not discourage Makarov – he was only 31 when the war ended. Nikolay began to work on the weapon that would later become one of the most recognizable trademarks in the modern history of firearms.

A pistol that belongs to the world 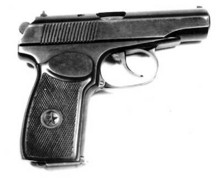 The Pistol of Makarov

The designer set a task to make a pistol that would be used by officers for self-defense and would replace the ageing Tokarev TT-33 semi-automatic. Makarov tried to use all the advantages of his predecessors from various countries. The constructor decided to use a “9mm Ultra” cartridge from the Walther – the pistol used by Luftwaffe officers of the German Air Force. The nominal caliber was 9.0mm. Makarov’s pistol turned out to be shorter and wider – it excluded the possibility to use other cartridges for shooting. This was done in case of the breakout of a new world war– in this case NATO forces would have been unable to use Soviet ammunition for covert operations.

The design of Makarov’s pistol – a.k.a. the Makarov or the PM - turned out to be very simple. When fired, the barrel and the slide do not unlock, as with many other pistols. The PM turned out to be heavy, which was a good feature of blowback pistols. The heavy slide provided greater inertia against recoil. Among other advantages of Makarov’s pistol were:

- simplicity and economy of parts. The PM consists of only 27 parts – the Walther, for example, had 42 – and many of them are multitask. For example, the trigger guard is also the take-down lever, the one piece slide stop is also the ejector and the sear spring is also the slide stop. This increases the reliability of the pistol;

- easy handling in the field. It could be easily reassembled (which tends to be the main feature of post-WWII Soviet arms designs) without any extra tools. The whole procedure takes less than a minute.

Speaking of the PM’s drawbacks, many military analysts cite the low precision of its shot and its limited firing range. However, all small-sized guns experience these problems, which turn out to be irrelevant as long as the gun fulfills it self-defense mission.

All these features were carefully studied by the Soviet military leadership. In 1951 the Pistol of Makarov was finally selected for use in the Soviet Armed Forces. The leading production plant for the PM was the mechanic works in the city of Izhevsk – Kalashnikov also manufactured his guns in this city.

The PM remained in wide service for both Soviet military and police until the collapse of the USSR in 1991 and beyond. Many modifications to the gun were made according to the purposes of its use – from personal defense gas pistols to sport guns. The PM is still produced in Russia, China and Bulgaria. It also remains a popular handgun for concealed carriage in the United States. Today, the number PMs produced in the world exceeds 10 million.

Nikolay Fyodorovich did not stop there – he continued his experiments with other kinds of weapons. In 1953, together with his colleague Nikolay Afanasyev, he designed the anti-aircraft cannon, the AM -23. He won the tender from the government in spite of the harsh rivalry from the Moscow design bureaus that could influence decision-makers because of their location. Makarov managed to reduce the backfiring effect of the cannon, which increased its safety. After this design Makarov received the title of USSR “Hero of Socialist Labor.” 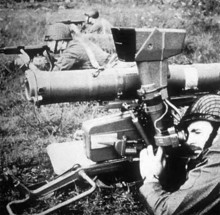 In the 1960s Makarov was very keen on designing the future of arms development – few arms designers that were famous in the middle of the 20th century were eager come up with new designs. Eight years of studies resulted in the production of the “9K111 Fagot” anti-tank missile system in 1970. According to the design, missiles were to be stored and carried in a launch tube. To be fired, the cannon had to be placed on a special launch pad made in the form of the tripod. The system can easily track down and destroy any target moving at a speed of 60 kilometers per hour. The “9K111 Fagot” can be easily put into action by three people alone. This made the unit more user-friendly than the similar systems of NATO. The “Fagot” has been used by the armies of 30 countries.

In 1974 Nikolay Makarov also developed the anti-tank missile “9M-113 Konkurs.” It retained many features of the “Fagot” but, unlike its predecessor, it could be used both by infantry and tank units. These designs brought Nikolay Fyodorovich his second title of “Hero of Socialist Labor.” Makarov has also trained many designers that still work at the Tula arms factory.

Nikolay Makarov was a talented arms designer, and a modest one at that. He never asked for new cars and apartments from the authorities – even though he could easily have done so thanks to his “heroic” status. He never told outsiders about his pistol unlike his fellow arms constructor Mikhail Kalashnikov, who toured and lectured around the world. Makarov was quite reluctant to talk about his occupation even with the family. According to his wife Nadezhda, with whom he lived for 44 years, Makarov did not say anything about his famous pistol at the time he invented it – he didn’t even show it to her.

After he said “farewell to arms” and retired, Makarov tried to solve local community issues as a deputy for the City Council of Tula. In his private life, Nikolay Fyodorovich enjoyed fishing in the local ponds. He died after his seventh stroke in May 1998 in Tula and was buried at the local cemetery.