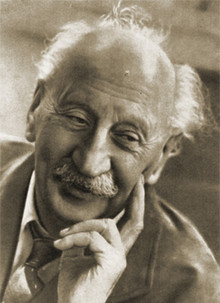 Abram Ioffe was the father of Soviet physics, founder of multiple physics institutes in Russia, and an educator of the country’s best scientists.

Abram Ioffe was born on the 29th of October in 1880 in the small town of Romny (modern day Ukraine) to a Jewish family. He was the oldest of five children. Young Abram learned to read when he was three, and by four knew how to write. When it was time for him to go to school, there was no gymnasium in the area, but only a basic boy’s school. It was there that Ioffe first became interested in physics. However, the level of education at the school was very poor, as most of the teaching staff consisted of religious state officials. In Ioffe’s words, the essence of his education in the school boiled down to “simply knowing, not understanding.”

Young Abram decided to enter the St. Petersburg Technological Institute, which admitted students regardless of their ethnic background or religion. However, his high expectations for education were not met, as he discovered teaching at the institute was all about boring lectures, which listed facts already known in the world of physics, while any practical work in the labs was reduced to a minimum.

Ioffe essentially had to teach himself in order to fill in the gaps in his education. He fostered a good rapport with the professors of the institute and was able to apply his technological knowledge at factories and construction sites. This experience was particularly valuable to him as it gave him a firm base for his future work, blending theoretical knowledge and practice into an organic combination. 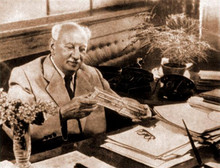 Upon his graduation from the Institute in 1902 Ioffe decided to study in Munich under Wilhelm Roentgen, who had just won the Nobel Prize in 1901. He asked several St. Petersburg physicists, and learned that Roentgen was the best experimental physicist in the world. Ioffe went straight to the Munich University, where Roentgen was a professor. Ioffe’s savings lasted him for half a year of modest living, while his thirst for knowledge was finally being satisfied.

Ioffe’s original intent was to study the nature of odor and its effect on human sense of smell, a subject that had fascinated him ever since childhood. However, he expanded his work far beyond that, and was so successful that Roentgen offered him a job in his laboratory where Ioffe worked for 3 years and carried out extensive research, particularly on the elastic and photoelectrical properties of crystals.

The Charge of an Electron

Ioffe was faced with unemployment upon his return home, and in the end the physicist with a PhD was admitted to work as a laboratory technician at the physics faculty of the St. Petersburg Polytechnic Institute. His work at the laboratory, however, allowed him to continue his research, which proved rather helpful for Ioffe. In 10 years he rose from laboratory assistant to professor and a scholar, whose name became known to the whole world of science. 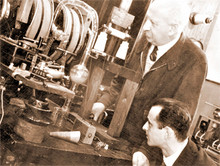 Ioffe defended his Master’s and Doctor’s degrees once again in Russia, and carried out some important experiments. One such experiment was measuring the charge of an electron. US physicist Robert Millikan was carrying out similar experiments at around the same time, which yielded the exact same results.  Unfortunately for Ioffe, Millikan published his discovery earlier, and therefore was the first scientist to be fully credited for determining the charge of an electron. For that, he received the Nobel Prize in physics.

According to some sources, Millikan had even written a letter to Ioffe, congratulating him on his research and recognizing the fact that Ioffe was the first to make the discovery. Ioffe was offered many prestigious positions abroad, including at the University of California in the USA. However, being a true patriot, he refused.

In 1908 Ioffe married Vera Kravtsova and together they had a daughter, Valentina. She grew up and followed in the footsteps of her father earning a PhD in physics. However, later Ioffe married for the second time to Anna Echeistova, a former student of his, who later worked alongside him and was his most ardent supporter for the rest of his life.

The Red Professor, the Founder of the Soviet Physics School

After the Revolution of 1917, Ioffe sided with the Bolsheviks. Having been taken by the Communist ideas of Marxism, he thought that science was to become a major part of the construction of a communist society. He was nicknamed “the red professor.” Ioffe saw it as his mission to prepare new physicists for the young Soviet Republic. He founded the State Roentgenologic and Radiological Institute, and was the head of the physics and technology faculty. Soon this faculty grew into its own Physics-technical Institute, which now bears his name. Moreover, he founded the Institute of Chemical Physics, as well as the first ever Physics-agronomic Institute.

Before the Revolution, the concept of teaching physics in Russia amounted to repeating basic information that had been discovered in the west. There was no physics school of its own in Russia, not to mention any proper experimental studies. All the institutions created by Ioffe provided a solid base to prepare a new qualified workforce in the area of physics. Because of his great gifts as a teacher and mentor, the most talented and brightest minds of the country came to study under Ioffe.

He raised a plethora of leading physicists, who helped build the future of science in the Soviet Union including Nobel Prize winners Pyotr Kapitsa and Lev Landau, as well as other prominent scientists like Igor Kurchatov. His creation of a scientific base of knowledge and his schools which determined the future scientific and technical development of country and the defense capacities of Russia is considered his biggest achievement. He has even been nicknamed the father of Soviet (and subsequently Russian) science.

In the beginning of WWII, Ioffe was appointed head of the Commission on military technology, and his institute started developing defense equipment. A lot of Ioffe’s developments focused on semiconductors and thermodynamics, which studied methods of the direct transformation of light and heat energy into electrical energy. He continued that research even after the war was over, heading up the newly founded Institute of Semiconductors.  Another nickname of Ioffe is the “father of semiconductors.” 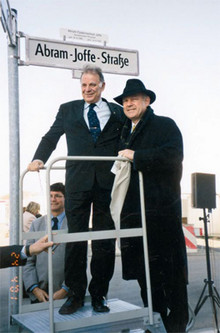 Opening of a street named after Abram Ioffe in Berlin, April 2001.(Photo from http://900igr.net)

Ioffe was offered to head the Soviet nuclear project, but he refused and recommended a few of his renowned students for the job. It was at this time that the Soviet party had announced a fight against “cosmopolitism,” which in essence was the persecution of Jews. Ioffe was accused of ideological crimes and fired from his post of director of the Physics-Technical Institute. Apparently officials were cautious against further repression because of Ioffe’s worldwide fame and the protection of his students.

Ioffe died in his office on October 14th, 1960, leaving a great legacy behind. His research spans a wide area of physics and covers three areas – electronic theory, hard body physics, and the physics of semiconductors. He confirmed the existence of an electron, measured its charge and proved the quantum nature of light and statistical character of the photoelectric effect. He also discovered ionic conductors of crystals, explained the reasons of their durability, determined how even small components obscure the qualities of crystals and suggested effective methods of their purification.

In addition to all his great discoveries and research, Ioffe made great contributions as a teacher and as the founder of the physics school in the Soviet Union. All Russia’s Nobel Prize winners and the country’s greatest technological achievements including defense and nuclear technology is merely a consequence of his initiative and tireless work.