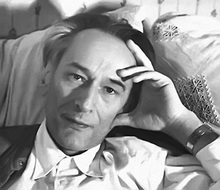 A philosopher and a mystic, Daniil Andreev was the only son of famous Russian writer Leonid Andreev.

Daniil was born in Berlin, Germany. His mother Aleksandra Veligorskaya died soon after giving birth to Daniil. His father, the distinguished writer Leonid Andreev, was devastated by the loss of his beloved wife and rejected seeing his son as it pained him too much. Young Daniil was sent to live with the family of his mother’s sister, Elizaveta Dobrova.

The boy grew up in Moscow in a deeply religious family, contrary to the new fashion of atheist upbringing. After the October Revolution of 1917 Daniil’s father fled the country, but the boy was left behind with his aunt’s family.

From early childhood he composed poems and made up stories, already then full of mysticism and fantastic creatures. He studied in a private school turned public after the revolution and then entered a Higher Literature Course; he was not allowed to attend university due to his “non-proletarian” background. He married for the first time when he was still a student. After graduation, Daniil Andreev started working as a sign-writer while continuing his literary experiments, fully realizing he had no chance of being published in the USSR.

In 1937 he met his second wife, Alla. In 1942 he was conscripted into the Soviet army and served as a noncombatant in a rifle division, first as a burial attendant and then as an orderly at a frontline hospital. During the siege of Leningrad he helped transport supplies across “the road of life” – the frozen waters of Lake Lagoda. After the war Andreev returned to civilian life and worked in Moscow.

In April 1947 he was arrested and convicted for anti-Soviet propaganda, organizing an anti-Soviet underground group and planning to assassinate Stalin. Andreev was sentenced to 25 years of imprisonment. Part of his term was served in the notorious Vladimir Prison (Vladimirsky Tsentral) created for highly dangerous criminals. Almost all the of Andreev’s works were destroyed by the security police as “anti-soviet literature,” including the novel “Wanderers of Night” about spiritual opposition to atheism and Soviet rule. In prison Andreev tried to restore the book, but only managed a few pages, along with some unrelated poems.

His wife Alla was also convicted and sent to a prison camp in Mordovia.

In 1954 Andreev’s case was revised and his term was shortened to 10 years. That same year he had his first heart attack, the first sign of a malady that would eventually cause his death.

In April 1957 Daniil Andreev was released from prison a terminally ill man. In three months he was officially rehabilitated. In less than two years, he died in Moscow.

While still in the Vladimir Prison, Andreev started having mystic visions and began writing the major work of his life – “The Rose Of The World” (Roza Mira) – a mystic treatise, containing a detailed description of spiritual reality surrounding the Earth. The reality is presented as two layers of worlds – the rising, leading to God, and the descending, created by evil forces led by Lucifer. The worlds coexist around Earth in different times and spaces. According to Andreev, the Universe is the creation of spiritual entities created by God known as monads. Each monad is 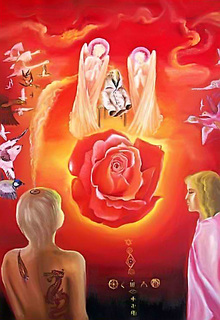 godlike and has unlimited creative powers and freedom. He also differentiates between monads created by God and those born of God – the latter are a minority, but they have more powers and are meant to be the leaders of the worlds. Lucifer, in Andreev’s understanding, is one of the god-born monads that rejected God’s entity and became the first representation evil in the world. That moment, the book says, was the beginning of the eternal rivalry of good and evil reflected not only in personal fates, but also in the history of entire nations.

From the point of view of Andreev’s mystic theory, all of the world’s religions are not complete, as they all show only separate aspects of God, but neither are they false, and Christianity is considered the one closest to the truth.

The book was only published in the Soviet Union via Samizdat – a form of underground publishing in which people passed rare copies of prohibited books from hand to hand. Officially it was first published in 1991. In 1997 it was translated into English and published in the U.S.