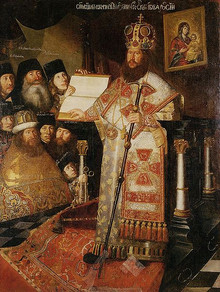 Patriarch Nikon with the monks of Resurrection New Jerusalem Monastery

Patriarch Nikon was the seventh Patriarch of all Russia. He initiated religious reforms that split the Russian Orthodox Church, leading to the formation of the ‘Old Believers’ movement.

Nikon was born into a peasant family in Central Russia. His mother died shortly after he was born, so his father married another woman. The stepmother had children of her own, and was very abusive to Nikon, frequently beating him and depriving him of food. Eventually, he ran away from home and went to study in a monastery school.

Nikon returned home after his stepmother died, and father died shortly afterwards. He took on managing the family’s affairs, and got married and had children of his own. His family life was plagued by sorrow – each of his 3 children died as infants. After 10 years of marriage, Nikon took the deaths as a sign from God and renounced his life in the world, joining the Monastery at the Solovetsky islands in Northwest Russia.

In his official capacity, Nikon was frequently sent to Moscow to collect alms for the monastery. On one of his trips he was introduced to Tsar Alexey Mikhailovich. The ruler was moved by Nikon’s devotion and education, and soon appointed him as archimandrite to a prominent and wealthy Novospassky monastery in Moscow.

Little by little, Nikon gained the complete trust of Tsar Mikhailovich – so much so that he became his confidant not only in religious matters, but in state politics as well, much to the envy of the court nobility. The boyars came to hate Nikon because his opinions and advice to the Tsar always won out over theirs.

In 1648, the metropolitan of Great Novgorod died, opening up a vacancy for the second most important position in the Russian Orthodox Church outside of Moscow. The Tsar appointed Nikon, his favorite, to fill the position. 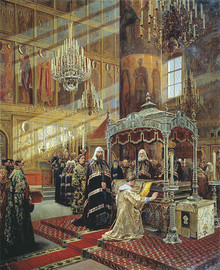 Tsar Alexis praying before the relics of Metropolitan Philip in the presence of Patriarch Nikon.

Four years later in 1652, Nikon reached the height of his career when the Tsar proposed him for the post of the Patriarch of all Russia. Nikon knew he was immensely unpopular with the nobility, and declined the offer several times. He gave in after the Tsar himself and the boyars fell on their knees, begging him to accept. He demanded that all those present pledge obedience to the “evangelical postulates and the laws of holy apostles, as well as the arch pastor of the church.”

Nikon, being educated and well-read, launched widespread reforms within the Church in 1653. Scholars advised him that much of Russian religious literature hadn’t been properly translated from the Greek originals, that the icons no longer followed the standards used in Constantinople, and that Church ceremonies had become outdated. He called for a Synod of experts to revise all church books according to Greek, and bring rites and rituals within the guidelines used in Byzantium.

He believed the move would strengthen the church’s organization and eliminate local differences in ceremony, and unify the Church’s theological system. However, many believers felt their national identity was being compromised, and that their church was no longer infallible.

He took a ruthless tack in his enforcement to reforms: Those who attempted to adhere to the old ways were prosecuted and severely punished, in some cases tortured. This resulted in a split in the church, with some sects forming the ‘Old Believers’ movement, which saw Nikon as a figure worthy of intense hatred and opposed the Orthodox church for centuries after. 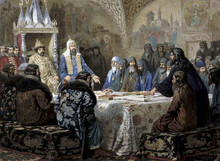 Several important churches and monasteries were constructed during Nikon’s time, like the New Jerusalem monastery, which was to become the new residency of patriarchs near Moscow, and several more near Onezh Lake. The Church had never before been as rich and glorified as it was during Nikon’s rule. He acquired property and serfs for monasteries, and carried out religious rituals with great pomp and ceremony.

But Nikon’s ambitions went far beyond reforming the Church. At the time, the Church was under the full control of the state – the Tsar had the power to appoint and fire patriarchs, call for religious councils, direct their activities and even issue Church laws. Nikon made it his mission to remove the Church from secular authority, and permanently separate the Church from the state.

He also sought to organize the Church with a hierarchy similar to the state’s – with the Patriarch having complete control.

The fall of the mighty 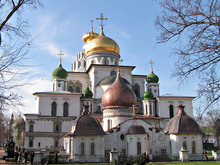 At the height of his career, Nikon became not only the supreme leader of the Russian Orthodox Church, but also practically a colleague of the Tsar. He openly intervened in state affairs and counseled the Tsar on how he should rule. Nikon’s influence was so great that he ruled the country while the Tsar went to war with Poland.

This kind of favor from the Tsar, combined with Nikon’s authoritarian style of rule, made him many enemies among the boyars, who eventually convinced the Tsar that Nikon’s glory overshadowed his. They accused Nikon of working to supplant the state through church rule.

Over time, the Tsar started listening to the boyars and distanced himself from the Patriarch. In protest, Nikon went to live at the Ascension monastery after publicly stripping himself of his patriarchal vestments in 1658. 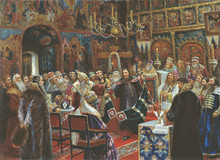 What began as a voluntary seclusion turned into a disaster for Nikon in a matter of years. The Church effectively had no pastor, so the Synod gathered in 1666 to appoint a new patriarch. It was ruled that Nikon was guilty of offending the Tsar, and was to be stripped of both his archiepiscopal rank and priestly functions. Though the Tsar privately thought the measures were too drastic, he did not dare protest the decrees issued by the Synod for fear of committing a mortal sin.

After the decree was pronounced, Nikon was banished to a distant monastery to be a monk. At the same time, the reforms he enacted were not cancelled and received the approval of the Synod.

Nikon remained at the monastery for 15 years. The Tsar was not angry with Nikon, and tried to lighten his burden in exile, allowing him to have his own church. Services were conducted by Nikon’s followers, who voluntarily went to live with him at the monastery. There was a constant, unending stream of supplicants seeking the blessing of the outcast Patriarch.

Before he died, Tsar Alexey Mikhailovich tried to mend his relations with Nikon, but they were never the same. The new ruler – Tsar Fyodor Alekseevich – decided to restore Nikon’s position and allow him to return to the Monastery of New Jerusalem, which he had founded. Nikon agreed, but by this time his health had grievously deteriorated – he died in 1681, on the road to Moscow.

Nevertheless, Nikon was given a patriarchal funeral and buried in the Resurrection Cathedral at New Jerusalem.

While Nikon remains a controversial figure, historians ascribe great significance to the role he played in religious and secular life Russia. His blessing to the Tsar before the war against Poland in 1654 is popularly held to be responsible for the annexation of ‘Little Russia’ (modern-day Ukraine).

His impact on the Russian Orthodox Church is immense, as the church remained split for centuries after his reforms, with the Old Believers eventually opposing not only the church but the state. However, the editing of church books in line with the Greek originals, as well as the large libraries housed under the monasteries, allowed the church to thrive and grow and made Moscow the ‘Third Rome’ after the fall of Constantinople.