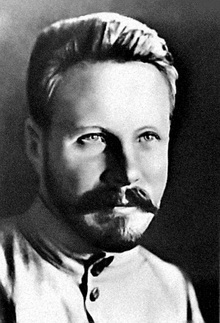 Mikhail Vasilyevich Frunze was a Russian/Soviet revolutionary, a politician and one of the most successful Red Army commanders during the Civil War of 1917-1923.

Mikhail Frunze’s father was a “Russified” Romanian who had lived as a peasant in the Kherson Region (now Southern Ukraine). He served in the military in Turkestan in Central Asia (now a divided territory shared by Russia, Afghanistan and China) and remained there to work as a paramedic. Frunze’s mother was a peasant who had moved to the Zhetysu (or the Semirechye, meaning “Seven Rivers”) Region of Turkestan in the 1870s. Mikhail Frunze was born in the town of Pishpek (now Bishkek, the capital of Kyrgyzstan) in the Semirechye Region. His childhood was financially difficult as his father died early and his mother had to work hard to earn a living. After graduating from the Pishpek town school he entered the gymnasium in the town of Vernyi (now Almaty, the largest city of Kazakhstan) and in 1904 graduated with a gold medal. He first became acquainted with revolutionary ideas in the gymnasium, where he attended self-development clubs. After graduating he entered the Polytechnic University in St. Petersburg. He was an active participant of various students’ and workers’ clubs, as well as a member of the Bolshevik faction of the Russian Social-Democratic Labor Party. In November 1904 he was arrested and expelled from St. Petersburg for participating in a political rally.

During the uprisings of December 1905 (the start of the 1905-1907 Revolution), Frunze led armed groups of weavers in the town of Ivanovo-Voznesensk (now Ivanovo, Central Russia) and participated in street fighting against government troops in Moscow. In 1909 and 1910 was sentenced to death but under pressure from public opinion, the first sentence was commuted to ten years in a forced-labor camp and the second sentence to life-long exile in Siberia. In exile Frunze formed a military club for exiled revolutionaries called the “War Academy” (“Voennaya Akademiya”). He also practiced self-education and promoted revolutionary ideas in Siberia. In 1916 he escaped and illegally preached the cause of revolution to Russian soldiers at the Western Front of World War I. After the February Revolution in 1917, which led to the fall of the tsars’ rule in Russia, Frunze was elected chief of the peoples’ police force in Minsk and a member of the Western Front Committee. During the events of October 1917 (which paved the way for the USSR), Frunze and the two-thousand-strong Red Army squad he had formed fought the White Guard royalists in Moscow, where he showed himself to be a capable commander. In the beginning of the 1917-1923 Civil War he became the chief enlistment officer, first in the Ivanovo-Voznesensk region, and later, in the Yaroslavl military district (also in Central Russia). There he formed Red Guard squads and led armed suppressions of anti-Soviet uprisings.

In January 1919 Mikhail Frunze was appointed Commander of the Fourth Army of the Eastern Front, and in March – Commander of the Southern Group of the Eastern Front, which was the main strike force during the that same year’s counter-offensive against the Whites. For the successful counter-attack Frunze was awarded the Order of the Red Banner. In July, he took command of the Eastern Front, which liberated the Northern and Middle Urals. In August, he took over the Turkestan Front, and all the Red forces in Turkestan that were cut off by the White Army. In 1920 Frunze fought the Bukhara Emir’s army (Bukhara is now a province in Russia’s Republic of Uzbekistan), then led the defeat of Pyotr Vrangel, one of the top White leaders, in the Crimea. When in autumn 1920 the Red Army took over the Crimea, Frunze ordered his troops to have mercy on captured enemy soldiers and telegraphed a proposition to Vrangel of full pardon to anyone who surrendered their arms and the possibility of emigration for those who wanted it. This “pliable attitude” invoked the displeasure of Vladimir Lenin upon Mikhail Frunze. However, the defeat of Vrangel’s army earned him an honorary award weapon. This and other military feats, including the destruction of bandit groups in Ukraine, earned him a second Order of the Red Banner. 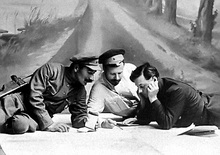 In March 1924, Frunze was appointed Deputy Chairman of the Revolutionary Military Council (the Revvoensovet) of the USSR (the chief military authority of the country) and Deputy People’s Commissars (the rough equivalent of ministers under the Bolsheviks) of Military and Naval Affairs. In April that same year he also became Chief of Staff of the Red Army and Head of the Military Academy. He led the military reform that took place in the Soviet Union in 1924-1925. His vast experience of commanding large forces of the Red Army allowed him to make a great contribution to the development of Russian military art and science. His works on war theory were key to forming the unitary military doctrine of the mid-1920s.

In 1925 Frunze was appointed Chairman of the Revolutionary Military Council and People’s Commissar of Military and Naval Affairs. He was also a member of the All-Russian Central Executive Committee (VCIK), the main legislative body of the Russian Republic of the USSR and a candidate for membership of the Politburo of the Central Committee of the Communist Party.

Mikhail Frunze died on 31 October 1925 after surgery. He is buried at the Red Square in Moscow.

In Soviet times, Frunze’s name was given to the capital of Kyrgyzstan (the former Pishpek, Frunze’s town of birth, now Bishkek), a mountain of the Pamir Range, several military ships and a military academy. Many streets and towns of the former Soviet Union still carry his name.

Viktor Kochubey Prince Viktor Kochubey was the Russian Minister of Foreign Affairs, and Imperial Chancellor. He is listed among the 129 greatest people in the history of Russia portrayed on a monument erected in 1862.