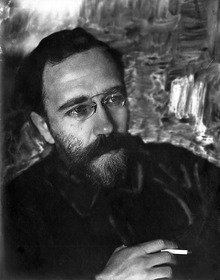 Lev Kamenev was born in Moscow into an educated Russian-Jewish family. His father was first a train driver on the Moscow-Kursk railroad and later an engineer. In his late school years, Kamenev began attending Marxist clubs and reading illegal literature. For that, he received poor marks and had to submit an application to the Education Minister for the right to enter a university. At 18 he entered the Faculty of Law of the Moscow State University, where he became a member of a students’ social-democratic club. After participating in a student demonstration on 13 March 1902, Kamenev was arrested, expelled from his first year in the University without the right to return and sent away to Tiflis (now Tbilisi), Georgia. There, he also took part in social-democratic clubs. In autumn that same year Kamenev left for Paris, where he met Vladimir Lenin and his (Kamenev’s) future wife Olga.

A year later Kamenev returned to Russia to conduct active revolutionary work, including the preparation of a railroad workers’ strike in Tiflis. In 1904 he was arrested for his actions, expelled to Tiflis and put under police surveillance. There, he entered the Caucasian Committee of the Russian Social-Democratic Labor Party, where he met Josef Stalin. As a delegate of the Party’s Third Congress, Kamenev stood for an armed uprising. After Lenin came to Russia in 1905 Kamenev became his closest associate, co-operating with illegal publications and propagating the Bolshevik point of view. At the RSDLP’s fifth congress Kamenev entered the Central Committee, the governing body of the Communist Party of the Soviet Union, and the Bolshevik Center, the chief structure of the Bolshevik faction from 1905 to 1910.

In April 1908 he was arrested once again. After his release, he went to Geneva and became part of the editorial board of the newspaper The Proletarian (“Proletariy”), a central Bolshevik outlet, together with Vladimir Lenin. In 1911 he lectured in the Longjumeau Party school near Paris, and wrote “The Two Parties” (‘Dve Partii’), a book in which he criticized the Mensheviks. Three years later Lenin sent him to St. Petersburg to head the Pravda (“The Truth”) newspaper and the Bolshevik faction of the Fourth State Duma. In November Duma members and Kamenev were arrested on charges of high treason. In court, Kamenev declared his disagreement with Lenin’s statement on the government’s defeat. Already in exile in eastern Siberia, he was subject to accusations of cowardice, but he found support from Josef Stalin, who explained Kamenev’s behavior as a stratagem.

Kamenev was freed by the 1917 February Revolution and arrived in St. Petersburg together with Stalin. The Central Committee condemned his position in court and issued an order not to assign him to any crucial posts. However, he remained on the Pravda editorial board, although he had to publish his articles without signing them. After the July demonstration and the Central Committee’s refusal to take power, Lenin went into hiding and left a note to Kamenev, asking him to publish his book “The State and Revolution” (“Gosudarstvo i revolutsiya”) in the event of his death. During 1917, Kamenev disagreed with Lenin several times on his views on revolution and Russia’s role in World War I. Lenin criticized Kamenev’s point, but found discussions with him useful. In fact, despite the resistance of the Petrograd (St. Petersburg) Bolsheviks, it was Kamenev who led the Bolshevik Russian Liberal Democratic Labor Party in Russia until Lenin returned from abroad, at which time Kamenev became Lenin’s main opponent in matters of strategy. The majority supported Lenin but in April 1917 Kamenev was elected to the Central Committee with 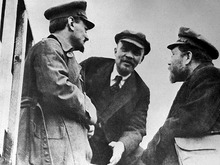 Lenin’s support. In July that same year, after the order to arrest the Bolshevik leaders was issued, Kamenev surrendered to the authorities willingly, but was released on 9 August. He was an active defender of a “unified socialistic government,” and even sent in his resignation when the armed uprising of October 1917 began. However, the Second Congress of Soviets elected him Chairman of the Central Executive Committee, the chief USSR government body. In November Lenin refused to acknowledge the result of Kamenev’s talks with the Social-Revolutionary party and Kamenev again handed in his resignation, this time from the Central Executive Committee. Within four days the Committee relieved Kamenev from his post as Chairman. Later, he was sent to Brest as part of the delegation to settle a separate peace treaty with Germany. At the end of November Kamenev applied for restoration as a Central Committee member, but was turned down.

In 1918 Kamenev was sent by Lenin to England and France to explain the Soviet government’s position to authorities there. He was expelled from England and the French government didn’t recognize his authority. On his way back to Russia Kamenev was arrested in Finland, but was traded for captured Finns. In September, after returning to Moscow, he became a member of the General Executive Committee Presidium and in October was elected Chairman of the Moscow Council. During the Civil War of 1917-1923 Kamenev went to the frontline as a special representative of the Defense Council. As the Moscow Council Chairman he was often addressed by scientists and writers and he managed to secure the release of the historian Alexander Kiesewetter, the publisher Ivan Novikov and other figures.

In 1922 Kamenev became Deputy Chairman of the Council of People’s Commissars and the Council of Labor and Defense. That same year Lenin passed his archive on to Kamenev. Based on this archive, the Lenin Institute was created with Kamenev as director in 1923-1926. Opposing Lev Trotsky, Kamenev suggested making Stalin the General Secretary of the Communist Party Central Committee. From 1922 until 1925 Kamenev, Josef Stalin and the revolutionary Zinovyev were considered the leaders of the Party. During the 14th Party Congress, Kamenev said that Stalin couldn’t serve as a uniting figure for the Bolsheviks, but his attempt to oust Stalin failed.

Soon, Kamenev was expelled from the Politburo and sent as an ambassador to Italy. In 1927 he was expelled from the Party, but had his membership restored a year later. In 1932 he was expelled again and sent into exile to the southern Siberian town of Minusinsk. The following year he was once again restored after yet another repentance. Realizing he was a no-go as a politician, Kamenev tried to devote himself to science. He headed the Pushkin House, the Institute of World Literature and the Academia publishing house. At the 17th Party Congress Kamenev repented his mistakes and praised Stalin. In December 1934 he was arrested, and, through the agency of the writer and investigator Lev Sheynin and the prosecutor Andrey Vyshinskiy, sentenced to five years in jail. The next year, his jail term was extended by 10 years, and a year after that, he confessed to terrorism, sabotage and espionage and was executed by firing squad. All of his relatives were repressed. Lev Kamenev received posthumous rehabilitation in 1988.