The rise to power 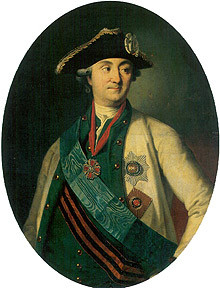 Aleksey Orlov was born into a distinguished noble family in 1735. His father fought in Peter the Great’s wars, earning the rank of State Advisor before becoming governor of the Novgorod region. Aleksey was one of five boys, all of whom rose to prominent heights as statesmen and military leaders. One of Alexey’s brothers – Grigory – even became the favorite of the Empress Catherine II the Great.

Aleksey and his brothers Grigory and Fyodor all started their careers in the Semyonovsky Regiment, where they served for a few years before being appointed sergeants. In 1757, during the Seven Years’ War, the Orlov brothers applied to the rear-guard.

Having resigned from the army in 1762, Aleksey Orlov settled in St. Petersburg where his brothers Grigory and Fyodor were performing military service.

It was during this period that the brothers became close to Catherine, the wife of Emperor Peter III. Grigory fell in love with her and pledged his eternal support in all her undertakings. At the time the Orlov brothers enjoyed immense popularity in their regiment and were, in essence, its informal leaders.

Peter III was a very unpopular ruler among both the people and the court, not to mention his wife, Catherine, whom he had neglected for years. Eventually Catherine started having affairs. Aleksey’s brother Grigory become one of her many lovers.

However, Catherine’s ambitions extended far beyond the bedroom – she had her eyes set on the crown. Her husband was still young and there would be a long wait to succeed him after his death. So, Catherine planned a coup d’état to seize power from her husband.

In 1762 the Orlov brothers masterminded the guards’ revolt and carried out Catherine’s plans, overthrowing Peter III. Aleksey, who had thought out the plan to the last detail, was to oversee Peter III’s confinement in the Shlisselburg Fortress, but the overthrown Emperor conveniently died before he reached his destination. Aleksey was devastated and sent Catherine a letter in which he assumed responsibility for the murder of her husband and apologized.

However, historians still cannot find evidence that it was Aleksey who organized the murder of Peter III. According to some accounts, Aleksey strangled the Emperor with his own hands. Yet others say this is unlikely, since it would have compromised Catherine ahead of her ascension to the throne.

After Catherine II was seated on the throne she rewarded the participants of the revolt, lavishing on them titles, money, estates and serfs. Aleksey Orlov and his brothers were promoted to the rank of majors-general and were given the title of counts. Aleksey and his brothers were also awarded the Order of Prince Aleksandr Nevsky, one of the highest awards in the Russian Empire, established by Empress Catherine I in 1725.

The Battle of Chesme Bay

In 1768 Aleksey Orlov went abroad for medical treatment but soon received news about the beginning of the Russo-Turkish War (1768–1774). While still in Europe, Orlov was assigned to command the Baltic Fleet, sent to fight the Turks in the Mediterranean. His mission was to distract Turkish forces from the main theater of the war in the Balkans. On 24 June 1770, during the battle in the Bay of Chesme, Orlov’s 14 battleships totally defeated the Turks.

Count Orlov's successful mission directed Turkish troops southwards, contributing to the victory that led to the signing of the Treaty of Kuchuk-Kainarji. Russia gained Southern Ukraine, the Northern Caucasus and Crimea and Aleksey Orlov was given title of Chesmensky.

In 1773 Aleksey Orlov was given yet another challenge - this time of a much more delicate nature. On Catherine's request he traveled to go to Livorno, Italy to seduce and bring to Russia the so-called Princess Elizaveta Alekseyevna Tarakanova, who proclaimed herself the daughter of Empress Elizabeth, therefore making claims to the throne. Tarakanova tried to organize a coup with the help of the Russian Fleet in the Mediterranean and bring down Catherine II.

Following the death of Peter III there were quite a few attempts to claim the Russian throne, the last of which ended in a massive peasant uprising led by Emelyan Pugachev. Catherine was frightened and needed as much protection from her subjects as she could summon.

Aleksey seduced Tarakanova and promised to marry her if she returned to Russia. However, upon her arrival, she was imprisoned in the Peter and Paul Fortress, where she eventually died of tuberculosis. There are rumors that while in prison she gave birth to Orlov’s illegitimate child.

Following the whole affair with Princess Tarakanova, Orlov went into retirement and settled in Moscow. By that time Catherine II had taken up with a new lover – Grigory Potemkin, who not only exercised influence on the Empress, but began managing state affairs as well. The era of Orlov power began to decline.

However, Aleksey had other ambitions to attend to - he retired and devoted himself to breeding horses. During the era of the Russo–Turkish wars, Orlov brought to Russia a large number of Arabians. He received more than 30 stallions and many mares as gifts from Turkish dignitaries and from the Sultan himself, and used them to make a new breed.

Successful in all his undertakings Aleksey enjoyed success with horses as well, going down in history for breeding his famous Orlov trotters. In the 19th century Orlov trotters were considered the fastest in Europe and his breeding efforts earned the Russian treasury millions of rubles. He also refined and popularized a new breed of chickens, doves and geese named in his honor.

Aleksey Orlov was remarkable for his athletic strength and ability. However, he couldn’t boast a good education or exquisite manners, and he didn’t speak foreign languages. He was very fond of sciences though, and like his brother Grigory, favored Russian scientist Mikhail Lomonosov and playwright Denis Fonvizin. Aleksey was also one of the founders of the Free Economic Society in Russia.

Count Orlov was a music lover and was the first to stop the nomads' eternal roaming when he set up a gypsy serf chorus, headed by the Russified Gypsy, Ivan Sokolov. The chorus's repertoire consisted mainly of folk songs, but they sang with such passion and emotion that they quickly became popular in Russia. 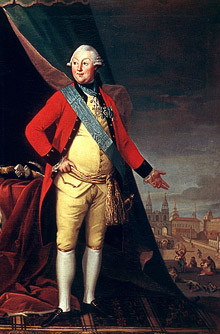 A portrait of the 18th century's latter half. State History Museum, Moscow.

In 1787 another Russo-Turkish war (1787–1792) broke out and Catherine II asked Orlov to again head the Russian Fleet in the Mediterranean. However, he rejected the offer, citing his disappointment with the condition of the Russian army and fleet.

Despite his loss of influence, Aleksey Orlov remained devoted to Catherine until his death, always wearing her portrait in a locket. He outlived the Empress, who died in 1796, and would soon face one of the greatest humiliations of his life under the new Emperor – Paul I.

Paul I, son of Peter III, wanted to restore justice by reburying his father’s remains in the Peter and Paul Cathedral. As Paul I considered Aleksey the murderer of his father, he made him carry the Emperor’s crown behind the coffin during the reburial procession. Perhaps he was hoping that Aleksey would admit his guilt and repent, but this did not happen. Soon Paul I ordered Orlov to leave Russia. Orlov and his daughter lived in Dresden, Germany for the rest of Paul’s rule until the new Emperor Alexander I sent him a personal letter requesting his return.

Emperor Alexander I had great respect for the hero of Chesme and it was under Alexander I that Orlov briefly returned to power and influence over state affairs. However, Orlov’s golden age had been with Catherine the Great, and had long since passed.

Aleksey Orlov died on 5 January 1808, leaving his entire fortune to his daughter Anna.