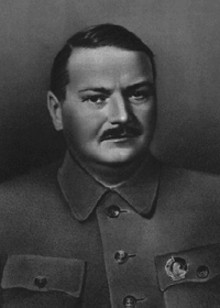 Andrey Zhdanov was one of Stalin’s close allies. In the Soviet Union his name was always among those who were said to “faithfully serve the welfare of the people.” But according to many historians this was far from the truth. Due to the activities of Andrey Zhdanov millions of innocent lives were lost during Stalin’s purges. Zhdanov is also known for his assault on culture, which was based on the ideas of so-called Socialist Realism, dubbed by many historians as the “Zhdanov Doctrine.”

Andrey Zhdanov was born in 1896 in the city of Mariupol, in modern-day southeastern Ukraine. His father, an inspector of public schools in the area, died when Andrey was only four years old. The Zhdanovs were forced to move around the country in search of a better life. When Andrey was nine he studied at a vocational school in the city of Tver, 100 miles northwest of Moscow.

Later, while working in various factories in the city, he became fascinated with Bolshevik ideas. From 1912 he began to take part in political rallies organized in the city. In 1914 he took part in the propaganda actions against World War I organized by the Bolsheviks – they wanted to put an end to what they called the “imperialist hostilities carried out at the expense of the proletariat.” Zhdanov studied at the Moscow Agricultural Institute but quit after one year.

In 1915 he joined the Bolshevik faction of the Russian Social Democratic Labor Party. A year later, at the age of 20, he enrolled in the Russian army. He spent four months at the school of ensigns in the city of Tbilisi, the modern capital of Georgia. From there he was sent to the 139th Reserve Infantry Regiment in the city of Shadrinsk in the southern Urals, where he proved himself a leader with great persuasive faculties. After the 1917 February Democratic Revolution toppled the Russian Tsar, Andrey Zhdanov became the Chairman for the Council of Soldiers’ Deputies in the city. That summer he coordinated all the Party’s activities in the area. After the Bolsheviks came to power Zhdanov was put in charge of coordinating land distribution in the Shadrinsk district. That same year he married a local girl named Zinaida.

First steps in the Party circles 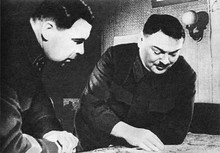 The commander of the Leningrad Front, L. Govorov and a member of the Front Military Council, A. Zhdanov, 1942

In 1918 Zhdanov returned to Tver to teach the basics of political science to the masses – few of which could read or write. Half a year later he was appointed editor of the local Tverskaya Pravda newspaper. This was his first “step to power” – for three and a half years he coordinated the Regional Planning Committee. In 1920 his son Yury was born. In 1922 the Communist Party appointed Zhdanov as Chairman of the Tver Region Party Committee. At a conference in Moscow Joseph Stalin became fascinated with the resolve of the 25-year old regional leader. The would-be ruler of the Soviet Union immediately realized that Andrey Zhdanov was a man he could trust.

In 1924 Zhdanov was moved to the bigger region of Nizhny Novgorod where he worked as the Chairman of the Regional Party Committee for 10 years. Stalin did everything possible to make sure that Zhdanov’s experience in “organizing the working masses for the construction of communism” would become known all over the country. In 1927 Zhdanov became a member of the Central Committee of the Communist Party of the Soviet Union. He carefully executed all of Stalin’s decrees on industrialization. By the middle of the 1930s the region of Nizhny Novgorod became one of the best in building heavy machinery plants and various metal works. However, as historians later revealed, it was all done at the expense of the peasant breakdown in the area. But Zhdanov did not care; he saw only that the industrial successes would pave his way to the top. 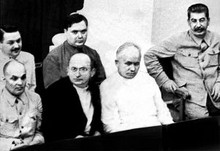 Working at the top

1934 was a crucial year in Zhdanov’s career. At the 17th Congress of the Communist Party he made a speech in which he called on all the people of the country to consolidate around “the leader of the people – Comrade Stalin.” On the final day of the congress he was elected to the “Orgburo” (Organizational Bureau) of the Central Committee – its members supervised the work of local Party committees and had the power to select and place Communist members in the positions that they saw fit.

Zhdanov’s second speech rocked the country’s artistic community. At the All-Union Congress of Soviet Writers he reiterated the words of Stalin pronounced on the birthday of Soviet writer Maxim Gorky: “The production of souls is more important than the production of tanks... And therefore I raise my glass to you, writers, the engineers of the human souls.” This concept of working with souls was developed by Zhdanov into the trend of Social Realism. He called on writers to serve “the cause of the people, the cause of Lenin and Stalin, the cause of Socialism.” He would develop this concept in full swing after World War II with his purge of the art world known as the “Zhdanov Doctrine” - even though it was inspired by Stalin.

That same year Stalin appointed Zhdanov as Chief of the Regional Communist Party Committee in Leningrad (now St. Petersburg) – after the assassination of the previous secretary Sergey Kirov. Zhdanov was in charge of carrying out purges of major military officers, scientists and researchers. He thoroughly coordinated the activities of NKVD in the city and the region. Before the war Zhdanov deported tens of thousands of suspect Bolsheviks and their families from Leningrad to northern Siberia. He personally approved 176 documented execution lists.

At the same time Zhdanov did not forget about the development of Socialist Realism. In 1936 he personally picked the best novel of the year – “Shadrinsky Gus’” (“The Goose from Shadrinsk”) by Evgeny Fedorov. There was a belief that the competition was specially organized to honor this very novel – as a tribute to the years that Zhdanov spent in the city of Shadrinsk during the revolution. In June 1940 Zhdanov was sent to Tallinn, the capital of Estonia, to supervise the establishment of the Estonian Soviet Socialist Republic.

During WWII  Zhdanov chose the role of political manager. At all times during the siege of Leningrad – no matter how the Soviet forces performed – he was a member of the military council of the Leningradsky Front. He gave political orders – it was up to the rest of the generals to put his these orders into practice – no matter the cost. In 1944 Zhdanov was appointed Head of the Allied Control Commission in Finland whose job it was to supervise the road to establishing peace in the country that was loyal to the Nazis during WWII. 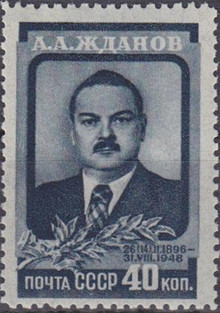 In 1946 Zhdanov became the Head of the Chamber of the Supreme Soviet of the USSR. Here he had a further chance to interfere in cultural affairs. It was “the second coming” of the “Zhdanov Doctrine” in the arts. Among the first to be censored in December 1946 were the poet Anna Akhmatova and the satirical short story writer Mikhail Zoshchenko. Again, as in the 1930s, the only way for many artists to survive was to conform to the Communist Party line. The “Zhdanov Doctrine” was successfully copied in China by Mao Tse Tung and in North Korea by Kim Il Sung. Zhdanov also initiated purges of many talented Soviet composers such as Dmitry Shostakovich and Sergey Prokofiev - they were criticized for “being formal in art” and for showing “too much respect for Western values.” By this ambiguous phrase Zhdanov meant that none of the composers were free to follow their own inspiration when writing music – he wanted them to pick topics that would “glorify the advantages of Socialism.” It was just another PR-trick for Zhdanov to show his importance. However, Sergey Prokofiev reacted furiously to the accusations. “Who are you to talk to me in such a way?!” he asked Zhdanov, who said nothing in return. None of the composers were executed but they all experienced difficulties in making their music known to the broader public.

In 1947 Zhdanov became the mastermind of “Cominform,” the bureau whose mission was to coordinate the activities of Communist parties all over Europe. But the job was purely nominal. During the last days of his life Zhdanov lost all his former influence – partly because of his heavy drinking. Andrey Zhdanov died in 1948 in Moscow of heart failure. He was buried inside the Kremlin Wall – the necropolis for prominent figures in the USSR.

Shortly after that Lidya Timashuk, Zhdanov’s doctor, sent a letter to the Central Committee of the Communist Party in which she pointed out several cases of malpractice by other doctors who were also taking part in the treatment of her patient. She was sure that this was the reason for Zhdanov’s death. Four years later, in 1952, the Central Committee paid attention to her letter, during the investigation of the so-called “Doctors’ Plot,” in which some of the leading doctors of the country (mostly Jews) were accused of an alleged conspiracy to eliminate the leadership of the Soviet Union. This note about Zhdanov came in handy at the time. But after Joseph Stalin’s death in 1953, the new Soviet leadership issued an official statement saying that the “Doctors’ Plot” had been fabricated.

After his death his native city of Mariupol was renamed Zhdanov until 1991 when it reverted to its original name. In 1949 Zhdanov’s son, Yuri, married Stalin’s daughter Svetlana Allilueva. The relationship, however, lasted only a year. After that Yuri devoted himself to chemistry studies - he became a rector of the University in Rostov-on-Don in the south of Russia.