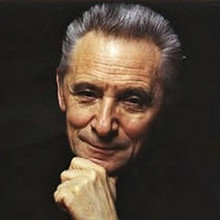 Choreographer of major innovative Soviet ballets since the 1950’s, Yury Grigorovich headed the Bolshoi Theater Ballet for thirty years. Called a genius by some and an authoritative dictator by others, he set the trend for several generations of ballet dancers and choreographers, gradually becoming a living legend of the 20th century.

Yury Grigorovich was born on January 2, 1927, in Leningrad (now St. Petersburg). He is the grandson of the Imperial Admiral Alfred Rozay and nephew of Georgy Rozay, lead dancer of the Imperial theater and Diagilev ballet company. But for a man of such “doubtful” origin his creative career in the Soviet state was generally a happy one. Not without thorns, however.

Revolt at the Kirov Theater

Although Grigorovich started as a dancer, he was choreographing in his teen years already. In 1946 he graduated from Leningrad Ballet School (now Vaganova Russian Ballet Academy), the oldest dance institute founded in 1738. Fresh from school, young Grigorovich immediately joined the Kirov (now Mariinsky) theater ballet company. He remained its lead dancer until 1961, when he gave up dancing for choreography. Already in 1957 Grigorovich mounted his first ballet on the Kirov stage, The Stone Flower, an immediate and absolute success. The Legend of Love followed four years later — and it became clear that Grigorovich was the man to sweep off the dust from academic ballets and to come up with a new dance language. But the Kirov Theater was the domain of Konstantin Sergeev, who opposed drastic changes. One could only imagine what the “cold war” between the two would have resulted in if in 1964, the 37-year-old Grigorovich had not been appointed chief choreographer of the Bolshoi Theater in Moscow.

Fame at the Bolshoi

This was the beginning of his thirty-year reign in the country’s major theater – with the playbill dominated by his own choreography: The Nutcracker (1966), Spartacus (1968), Ivan the Terrible (1975), Angara (1976), Romeo and Juliet (1979), and The Golden Age (1982), to mention just a few. Soviet leaders loved his ballets, and this love brought him two major and prestigious awards:  the Lenin Prize for Spartacus and the State Prize for Angara, a ballet about young Siberian workers. Grigorovich enjoyed these honors, despite not being a Communist Party member – quite a rare thing in the Soviet times.

Still, he was not that independent in his creative work as he would liked to have been. The then-Minister of Culture Ekaterina Furtseva, known for her controversial policies and often accused of lack of proficiency and education made Grigorovich change the tragic finale of Swan Lake, , which Grigorovich was restoring in 1969.  As a result, in the new version of the Marius Petipa - Lev Ivanov staging, Odette would not die on the stage of the Bolshoi but would happily reunite with Prince Siegfried. This finale was in effect for several decades. It was only in 2001 that Grigorovich could finally bring the original scene back on stage.

The first years at the Bolshoi were prolific and cloudless. Dancers adored him, and his future enemies still were his friends. His Spartacus starring Vladimir Vasilyev and Maris Liepa became the trademark of the theater, while The Nutcracker has been hailed as the best-ever staging of Tchaikovsky’s ballet.  He worked with a constellation of outstanding dancers including his wife Natalia Bessmertnova.

Time passed, and what used to be new and fresh grew obsolete and conservative. Grigorovich’s almost unlimited authority at the theater was not up for discussion. Obviously, not everyone was pleased with his style, both as choreographer and head of the ballet company. Some disliked his limited means of expression, others reproached him for his repertoire policies. The 1975 Ivan the Terrible caused controversy among the intelligentsia who did not accept its message: the end justifies the means. 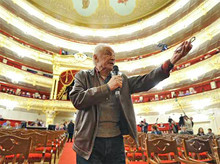 Yury Grigorovich in the Bolshoi theater (Photo from http://zateevo.ru/)

In the beginning of the 1990’s the Bolshoi Theater became the scene of permanent intrigues and protests. Young dancers were demanding new parts which the choreographer was not too eager to give them. Neither did he show any intention to discharge his old favorites. It was then that the Spiegel magazine published a controversial article accusing Grigorovich of authoritarianism and a creative monopoly.

The 1990’s were turbulent years for the Bolshoi and Grigorovich himself. In March 1995, when he learnt that the Ministry of Culture was considering a new chief choreographer, Vladimir Vasilyev, he resigned “at his own will”. His departure was followed by a strike. Loyal dancers refused to perform in protest of his forced retirement.

Grigorovich moved to Krasnodar, in the Russian South, where he created his own ballet company. This was not an easy task. Dancers from different schools across Russia did not have the same level of expertise as he was used to. Also, a local theater could not afford a large company like in Moscow or St. Petersburg, which inevitably limited the repertoire. He first mounted The Golden Age, while Swan Lake and Raymonda followed. Grigorovich gradually restored most of his ballets there. Less than ten years after its foundation, the company was already recognized in the ballet world. It now regularly goes on tours across Russia and abroad and its dancers take part in international ballet competitions.

In most of the renewed ballets, the chorographer kept the set designs by Simon Virsaladze, a talented set designer who created the sets and costumes for almost all of Grigorovich’s works.

While leading the ballet company in Krasnodar, Grigorovich also travels a lot, staging ballets in theaters all over the world. From 1995 until her death in 2008, his wife Natalia Bessmertnova was the dance coach (or repetiteur) in all the companies he worked with. In recent years he has also brought back several of his old ballets on the stage of the Bolshoi. The latest, Romeo and Juliet, premiered in April 2010.