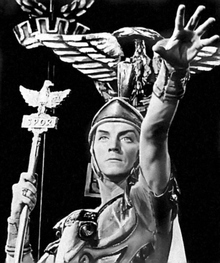 Liepa was the principal dancer of the Bolshoi Ballet in Moscow and a man of principle.

Born on 27 July in Riga, Latvia Maris was a sickly child. His mother wanted him to become a doctor. But with the intention of improving his health the child was taken to the Latvian Opera and Ballet school. His father, Edward Liepa, was an opera singer but had lost his voice at an early age and became a stage engineer at the Latvian National Opera. Edard Liepa had many theatrical friends who suggested dancing would help strengthen his son’s health.

Funnily enough Maris Liepa’s stage debut was in an opera. He sang in a boys’ choir in “Carmen” at the Riga Opera and Ballet Theater where his father used to perform. By the age of 13 Maris had already danced parts in three children’s ballets and several adult ballets including “Don Quixote” and “Romeo and Juliet.”

Along with ballet Maris practiced sports, gymnastics and swimming. He was Latvia’s repeated champion in free style swimming, which left him with a radiculitis.

In 1950 Maris debuted in Moscow at the All-Union Conference of Choreographic Schools. He was noticed by the city’s ballet teachers and accepted in the Moscow Choreographic School. His teachers thought he would become a character dancer but in 1955 Maris graduated with pas de deux from “Don Quixote” and established his career as a classical dancer.

Liepa wanted to stay in Moscow but the Ministry of Culture insisted he return to Riga. After several successful performances in Riga and on tour, Maris finally accepted an invitation to join the Moscow Stanislavsky and Nemirovich-Danchenko Theater. In four seasons with the musical theater he performed leading roles in “Esmeralda,” “Le Corsaire,” “Joan d’Arc” and many more.

Finally in the summer of 1960 Maris Liepa was invited to dance with the Bolshoi ballet group, first on a tour of Poland and then on Moscow’s main ballet stage at the Bolshoi itself. He debuted in the role of Bazil in “Don Quixote” with Maya Plisetskaya. Soon he danced the most crucial part of his career, the part of Count Alert in “Giselle.” A bravura technician of the Bolshoi, Liepa worked with the theater from 1960 till 1981. He was the embodiment of the masculine heroic style that was peculiar to Bolshoi dancers. His fame was known around the world. 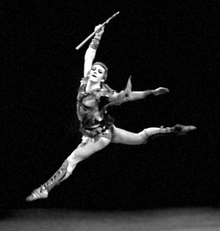 When the Bolshoi acquired a new Ballet Master, Yury Grigorovich, Liepa’s career in the theater took a turn. The premier of Grigorivich’s production of “Spartacus” brought Liepa immortal fame and in 1970 Liepa’s portrayal of Krass earned him the Lenin Prize, the Soviet Union’s top award in the filed of arts and literature. But after dancing in several re-staged performances, Liepa published an article in “Pravda” newspaper criticizing Grigorovich’s management methods; afterwards he was deprived of a chance to perform in new productions.

He played his last large role with the theater in 1977. But for a man of principle the art of the ballet was more important than being the Bolshoi’s principal dancer. After parting with the theater Liepa started to combine theater work with choreographing and acting. He played in several Russian and foreign films (“The Tomb of the Lion,” “Bembi’s Childhood,” “Bembi’s Youth,” “Lermontov,” “The Fourth”) and wrote articles (“I Want to Dance for 100 Years” (1980) and “Today and Tomorrow in Ballet. Maris Liepa” (1986).

In the late 1980s the Moscow Council decided to establish the Maris Liepa Ballet Theater with Leipa as artistic director, but the dancer died of a heart attack before he could take he reigns. Some say he was on his was to the Bolshoi, where he would not be allowed in by security guards as his pass had been taken away. And his heart couldn’t take the pain of not being allowed to enter at the theater where he had danced for over 20 years. His ballet troupe was reorganized into the “festival-ballet” led by Sergey Radchenko.

Maris Liepa was buried in Moscow. But there’s also a headstone of his family grave at a cemetery in Riga where, next to his name, there’s a sign that says: “Far away.”

After he died Russian newspapers published exerts from his diary that said: “Lack of prospects… is there anything to wait for, live for, exist for?”

Today his two children, Ilze and Andris Liepa, are trying to answer that question for him by dancing on the stage of the Bolshoi.