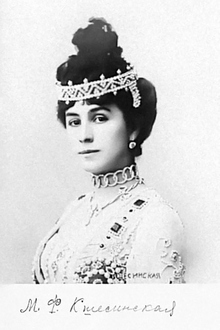 Kshesinskaya was born to an artistic family. Her grandfather was a famous violin player, singer and actor and both her parents were ballet dancers although her mother abandoned the stage after marriage, dedicating herself to her family.

At the age of eight Matilda enrolled in the Imperial Theatre School, where her brother and sister already studied.

Her life and artistic career were closely linked to the Czar’s family. She would always remember the day of her graduation exam, which became a turning point in her life. The exam was traditionally attended by Czar Alexander III, the Empress and the successor to the Russian throne, the future Emperor Nicholas II. After the show, the Emperor told her: “Be the fame and decoration of our ballet!”

Later in her memoirs she recalled how excited and impressed she was with these words: “I said to myself that I must live up to these hopes!”

But it was the meeting with 21-year-old heir to the throne Nikolay Aleksandrovich, future Czar Nicholas II , that changed her life. After the exam, she sat next to Nicholas at the reception. She recalled later that “at the end of the evening they looked at each other not like they did jut several hours ago.” That’s how their romance began. 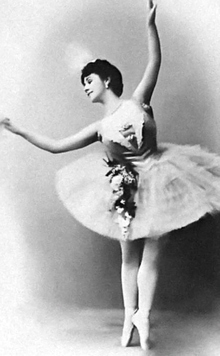 Their dates were no secret to Alexander III but for some time he preferred to turn a blind eye. However, when the time came for the heir to the throne to tie the knot, the romance could no longer be permitted.

Nicholas married Alix of Hesse in the spring of 1894 and half a year later ascended the throne after the death of his father. Both Matilda and Nicki – as she called him – would always remember their love. Kshesinskaya never missed an opportunity to dance before the Czar and it was always a special occasion for her, as she recalled in her memoirs.

Marrying into the Royal family

But Matilda was not left alone. The Czar’s cousin, Grand Duke Sergey Mikhailovich, favoured Matilda and took charge of her, becoming her patron. But it was another member of the royal family, Grand Duke Andrey Vladimirovich, with whom she ultimately found true happiness and built a family.

However, it was not all thanks to her highest patrons that Kshesinskaya got the first parts on the Imperial stage. From her childhood her greatest passion was dancing. She amazed her colleagues by her fantastic obsession with work, spending hours at the bar. She was the first Russian dancer to perform 32 fouettés, a quick whipping movement of the raised leg usually accompanying a pirouette.

On stage she was irresistibly charming and feminine. Her dancing was a combination of the technically irreproachable Italian style and the lyricism of the Russian school. From her father, Kshesinskaya inherited a talent for pantomime and dramatic interpretation.

Her repertoire included among others, Fairy Dragee in The Nutcracker, Odette-Odile in Swan Lake, Pakhita, Esmeralda, and Princess Aspicia in The Pharaoh's Daughter. 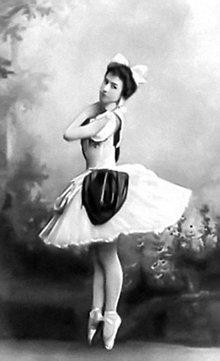 Matilda Kshesinskaya was convinced that a dancer with academic training is capable of any style. She proved this by participating in experiments by Mikhail Fokin (Butterflies, 1912; Eros 1915).

Emigration after the Bolshevik revolution

After the October Revolution she fled Russia together with Grand Duke Andrey Vladimirovich and went on to bring up a generation of internationally famous dancers. Thanks to Matilda Kshesinskaya, the world learnt the names of Margaret (Margo) Fonteyn and Pamela May.

Kshesinskaya outlived her celebrated friends: impresario Sergey Diagilev and the legendary dancers Anna Pavlova, Vazlav Nizhinsky all passed away before her. She died at the age of 99 in 1971. She is buried at the Parisian cemetery Ste-Geneviève-des-Bois.