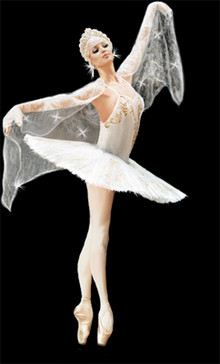 Although she trained as ballerina, Anastassia Volochkova has become more of a media personality, often seen at parties, on popular television shows and in advertisements.

Volochkova was born in Leningrad (now St. Petersburg). Her parents were not connected to the professional ballet. Her mother was a guide in the northern capital and her father was a table tennis player, and even holds a USSR champion title in this sport. After finishing his career he took up coaching and, as Anastassia has said in interviews, wanted her to become an athletics champion. His dream, however, never came true because she wanted to pursue a dream of her own - becoming a ballerina.

She studied at the Vaganova Dance Academy, where she was finally accepted in 1986 after several unsuccessful attempts. She acknowledges the training was not easy for her. At first she only received unsatisfactory marks in all her ballet courses. After classes at the Academy she worked several hours with private coaches. Anastassia is proud that she finally succeeded and earned a diploma with honors.

From the Mariinski to the Bolshoi

After graduation in 1994 she joined the Mariinsky Theater Ballet Company. Over the course of four years she danced in major classics roles, including Odette-Odille in “Swan Lake,” Nikia in “Bayadere,” Aurora in “The Sleeping Beauty” and Kitri in “Don Quixote.”

In 1996 she received a contract with the Bolshoi Theater and moved to Moscow. From that time on her name has been somewhat synonymous with scandal. In the capital she was mainly engaged in choreographies by Yury Grigorovich (“Raymonde,” “The Sleeping Beauty,” “Bayadere”), who headed the Bolshoi ballet company for several decades but was forced to leave in 1995. 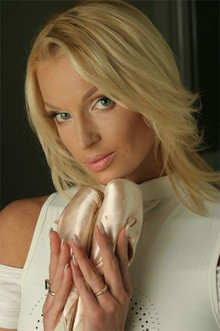 In 2000 Volochkova had a conflict with the direction of the Boshoi, which refused to renew her contract due to “a creative dispute.” But a year later the ballerina was again invited to the Bolshoi Theater – a condition imposed by Yury Grigorovich for the restoration of his “Swan Lake.” Although Volochkova’s official site says, “the performance had an unprecedented success,” critics were quite reserved: “Beautiful and cold, self-sufficient in every pas, she was full of admiration for herself.”

In 2002 Volochkova received the Best Dancer title at the Benois de la Danse competition founded by Yury Grigorovich in 1992. The award process was accompanied by uncomplimentary comments from the public. That same year she received the title of Honored Artist of Russia. The next year she joined the ruling United Russia party (later she even ran for mayor of Russia’s Olympic city, Sochi).

"Too heavy" for the Bolshoi

2003 saw another round of conflict with the Bolshoi Theater, which once again refused to renew her contract for a year, limiting it to four months. The official explanation was that she had gained weight and that they could not find her a permanent partner. Her sole partner, Evgeny Ivanchenko, left the theater after a trauma. The ballerina did not sign this contract, which did not satisfy her, and filed a suit against the theater. She won the case and returned to the Bolshoi but its administration still was not willing to see her on its stage. She was only given parts that did not require partners while Volochkova insisted she should be reinstated in her previous repertoire. 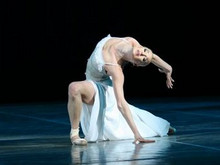 The next year Yury Grigorovich invited her to his newly established ballet company in the southern city of Krasnodar. In spring 2005 the Bolshoi Theater announced that Volochkova was not in good form and did not meet the standards of a soloist. Later she was only cited in the media as the leading dancer of the Krasnodar Ballet Theater.

Presently, Volochkova has been touring with her solo program made up of a mix of classical ballet performances and contemporary dance. Despite skepticism from critics, she has gathered full houses – partly due to her celebrity status.

Anastassia has tried herself as an actress, taking part in several films and TV series. She even says that her dream is to open a theater of her own. 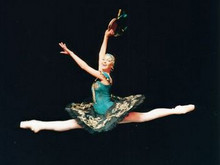 The ballerina was married to the businessman Igor Vdovin from 2007 to 2008. She has a daughter named Ariadna, born in 2005.

Anastassia Volochkova says she has many plans for the future, some of them have to do with ballet; others do not. For now she intends to continue her dancing career.