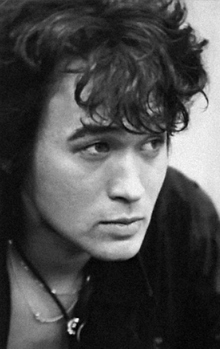 Few bands in the history of Russian music have been more popular or made more of an impact on their genre than the rock group Kino. Any discussion of Kino must inevitably begin and end with its creator, writer and lead singer, Viktor Tsoy, a man who has been called "a legend" and "the last hero" of Russian rock. The life of Viktor Tsoy is the life of his band Kino.

He can't remember the words YES and NO
He remembers neither ranks nor names
He can reach the far-away stars
Not concerning it to be a dream
And to fall down dead-burnt by heat of the star
Which we call the Sun.

Ironically, Tsoy became a bona fide rock star during the time when any type of artistic expression was banned in the former Soviet Union; yet his career skyrocketed, and he went on to become an idol to millions.

During the 1980s, rock music blossomed in Leningrad (now St. Petersburg). It was a world of incredible happenings in the underground scenes of art, poetry and music.

Viktor Robertovich Tsoy was born in 1962 to a Korean father and Russian mother in Leningrad. He is regarded as one of the pioneers of Russian rock and has a huge following in the countries of the former Soviet Union even today.

He began writing songs at 17. His early lyrics discussed themes like life on the streets of Leningrad, love and hanging out with friends. Many heroes in his songs were young men trying to survive in a tough world.

At 18, Tsoy was expelled from the Serov Artistic Academy. The reason for the expulsion was "poor grades" but it didn't help that he was heavily involved in the rock scene. By this time Tsoy had began to perform the songs he wrote at parties. During one of these performances he was noticed by Boris Grebenshchikov, a member of the established rock group "Aquarium."

Grebenshchikov took Tsoy under his wing and helped him start up his own band. Leningrad's Rock Club, the only club in the USSR where rock bands were allowed to play. It was at the club’s First Annual Rock Concert that Viktor Tsoy made his stage debut. He played solo but with the support of two Aquarium members. Tsoy's innovative lyrics and music impressed the crowd.

Before making it big, Tsoy said that the problem with music was that no one wanted to take chances. He wanted to experiment with lyrics and music in order to create something fresh that no one had ever heard before. Tsoy succeeded in his goal. Shortly after the concert he recruited other musicians and they formed Kino which in Russian means "cinema." They recorded a demo tape at Tsoy's apartment. This tape was quickly passed around Leningrad and then all over the country by rock enthusiasts. Kino began to gain a following.

In 1982 Kino released their first album entitled "45". The album confirmed Tsoy's willingness to address political topics in his music, something not many other artists were prepared to do. In his song "Elektrichka" (Russian for suburban commuter train), he discussed a man stuck on a train that was taking him where he didn't wish to go; this was clearly a metaphor for life in the Soviet Union and the band was quickly banned from performing this song live. The political message of the song made it popular among the youth of the anti-establishment movement that now began to look to Tsoy and Kino as idols. 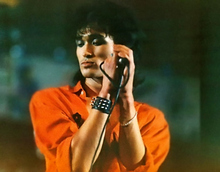 Under communist rule these bands weren’t allowed on television. Although there were official bands at the time that were sanctioned by the government and were allowed to perform on TV, other bands, like Kino, had to have their lyrics pre-approved. Or they allowed them play at the Rock Club, which was under the umbrella of the KGB, in order to keep an eye on them.

Kino espoused more of their political views at the Second Annual Rock Club Concert. The band won first place in the competition thanks to Tsoy's anti-war song “I Declare My Home... a nuclear-free zone.” The song's popularity was fuelled by the ongoing Afghan War which was claiming the lives of thousands of young Soviet citizens.

Kino was still not getting much mainstream attention due to the lack of government support, which would all change with the arrival of Mikhail Gorbachev. Gorbachev came to power in 1985. His social and economic reforms, Glasnost and Perestroika, began exposing the social and economic problems of the Soviet Union and allowed open discussion of them in the media. People were beginning to realize that the Communist experiment was not working and that things needed to change. Glasnost loosened restrictions on the media and allowed rock bands to be written about and shown on television.

In 1986 Tsoy used the open atmosphere and public sentiment to release the song “I Want Changes.” The song called on the young generation to demand changes within the current system and spread Kino's name all over the nation. 1987 was a breakthrough year for the band. The release of its seventh album “Blood Type” triggered what was then called “Kinomania.” The album was his most political one yet and also his most innovative musically. Most of the tracks were aimed at Soviet youth, telling them to take control and make changes within the nation. Some of the songs discussed the social problems crippling the nation. The sound and lyrics of the album made Tsoy a hero among Russia's youth and Kino the most popular rock band ever.

Over the next few years Tsoy appeared in several successful movies and also traveled to the United States to promote his films at film festivals. Several more albums were released; their themes were once again mostly political, further fueling the band's popularity. Even though Tsoy was a huge star, he still lived a relatively normal life. He kept his old job in the boiler room of an apartment building, surprising many. Tsoy said that he enjoyed the work and he also needed the money to support the band, as they still received no government support and their albums were copied and passed around the nation free of charge. This made Tsoy even more popular among the people because it showed that he was down to earth and they could relate to them.

Kino's finest hour came in 1990 with a concert at Moscow's Luzhniki Stadium. Sixty-two thousand fans filled the stands to celebrate the triumph of Russia's most successful rock group. While in Latvia, on 14 August 1990, Tsoy finished recording the vocals for Kino's next album. He was supposed to travel back to Leningrad so that his band mates could record its musical score.

Early in the morning of August 15th, on the way back from a fishing trip, Tsoy crashed when he lost control of his car and slammed into a bus outside Riga. The car was completely demolished to a point where one of its tires was never found. Tsoy had actually wanted to take his son, Aleksandr with him on the trip, but fortunately, Aleksandr did not go.

On August 17th, Komsomolskaya Pravda, one of the most read Soviet newspapers, had this to say about Tsoy and his meaning to the youth of the nation: 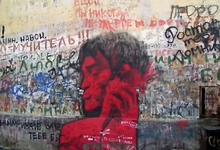 Tsoy means more to the young people of our nation than any politician, celebrity or writer. This is because Tsoy never lied and never sold out. He was and remains himself. Tsoy is the only rocker whose image is no different than his real life, he lived the way he sang... Tsoy is the last hero of rock.

Remarkably, the only thing to survive the crash was a tape which contained the only recording of Tsoy's vocals for the next album. The tape was recovered and the surviving members of Kino recorded the music for the album, which was christened “Black Album” in a sign of mourning for the fallen singer. The album became the band's most popular creation and solidified Kino's place at the top of Russian rock history and Tsoy’s as its greatest hero and legend. Following Tsoy’s death, more than 65 adolescents from all over the Soviet Union committed suicide because they believed their life lost its meaning without their cultural hero.

Kino's impact on Soviet music and society was immense. They introduced a sound and lyrics that no other Soviet act before them was able or willing to produce. Kino opened the doors for modern Russian rock bands. Kino’s legacy can still be felt today in many places around Russia, from graffiti on the fences of St. Petersburg to a whole wall dedicated to Tsoy on the famous Arbat street in Moscow where fans still gather to remember their hero. In 2000 some of the nation's top rock bands came together and released their interpretations of Kino's best songs as a tribute to Tsoy on what would have been his 38th birthday. Even though he is gone, Tsoy still lives in the heats and minds of many Russians.