Valery Gergiev is one of the busiest and most sought after conductors in the world. He is regularly applauded at the podiums of major opera houses and orchestras around the world. Today he is the director of the Mariinsky Theater in St. Petersburg. Valery Gergiev’s multifaceted life is the unique and fascinating story of a man who seized the essence of music.

Valery Gergiev was born on 2 May 1953 in Moscow into the family of an officer and brigade major, Abisal Gergiev, and his wife Tamara, who was a gifted instrumentation engineer. Six years later the family moved to North Ossetia, to the city of Ordzhonikidze (now Vladikavkaz). It was there that the future conductor spent the halcyon days of his childhood and youth. He recalls this time with tenderness and nostalgia and says he “got energy from his unusual origins, both musical and ethnic.”

“I have achieved everything I can boast today thanks to my parents,” he comments.

Unfortunately, Valery's father died at the age of 49 when Valery was just 13. But Abisal had managed to teach his son some very important things – he imparted his personal values and taught him to be conscious of the role he played in this world.

After Abisal’s death the family had a hard time, but Valery’s mother continued to raise the children, dedicating as much time to them as possible. Her aim was to give her children an all-round education. She sent them to the well known musical school #5, where such outstanding artists like director Evgeny Vakhtangov and singer Pavel Lisitsian also studied. Together with his sister Larisa, Valery began attending music lessons, which, with time conquered his heart.

When Valery was little, he wasn’t noted for any outstanding ability in music; he was an ordinary boy who loved climbing trees and playing with his friends. His musical capabilities were a surprise to his family – they learned that their son was considered quite promising and even talented from their neighbor, a professor at an art school who had sensed the boy’s outstanding abilities. 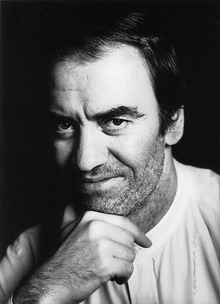 Valery graduated from the musical school where he mastered piano and conducting; there was no any doubt that the young man was destined for a sparkling future in the field of music in general and conducting in particular. Thus, in 1972, at the age of 19, Valery entered the Saint Petersburg State Conservatory and studied under Ilya Musin, one of the greatest conductor-makers in the history of Russian music.

Gergiev graduated from the  Сonservatory in 1977 and the brilliant student was immediately asked to join the Kirov Opera (now the Mariinsky Opera), though the post wasn’t too prestigious – he was appointed the assistant to the chief conductor. But the young man grasped the basics of the profession in a single flash and by 1978 he had already independently directed the opera “War and Peace,” written by Sergey Prokofyev.

In 1981 Gergiev was offered the post of the head of the State Armenian Orchestra, where he remained for the next four years, until 1985, the year he made his debut in the United Kingdom together with the young prodigy pianist Evgeny Kissin and the violinists Maxim Vengerov and Vadim Repin, at the Lichfield Festival. In 1988 Gergiev took up the post of principal conductor at the Mariinsky (then Kirov) Theatre. In this capacity, Gergiev has overseen the emergence of a plethora of world-acclaimed singers. Under his direction, the theater’s opera and ballet repertoire has expanded significantly.

The maestro also devotes much attention to programs for children and young people and has revived the tradition of offering subscriptions for this audience group as well as free concerts for students.

In addition to his artistic duties at the theater, Gergiev also works in fund-raising for such projects as the recently built 1100-seat Mariinsky Hall, and he says he intends to achieve the complete renovation of the Mariinsky Theater by the end of 2010.

During his first season as principal conductor of the Mariinsky Theater, Gergiev organized a festival dedicated to Modest Mussorgsky, a famous Russian composer and innovator of Russian music during the Romantic period. The experience turned out to be a huge success, and thus the practice of organizing theme-based festivals headed by Valery Gergiev became a tradition. In 1990 the famous conductor held a festival dedicated to Tchaikovsky, followed the next year by the Prokofyev festival and then the Rimsky-Korsakov festival. He tried to time the events to coincide with the composers’ anniversaries. Gergiev is also the artistic director of the St. Petersburg White Nights Festival founded in 1993, the annual Mikkeli International Music Festival in Finland created in 1994 and, since the autumn of 1996, he is in charge of the Rotterdam Festival and part of Israel's Red Sea International Music Festival.

In 1991, for the first time, Gergiev conducted a western European opera company with the Bavarian State Opera in a performance of Modest Mussorgsky's “Boris Godunov” in Munich.

At the beginning of the 1990s Gergiev started performing abroad. In 1992 he performed for the first time at the Metropolitan Opera, and has since returned several times. Among the other places where Gergiev was more than welcome was the Rotterdam Philharmonic Orchestra where he worked as principal guest conductor from 1995 to 2008! And at the beginning of 2007 Gergiev took up another, equally important post – that of principal conductor of the London Symphonic Orchestra.

In 2003 Gergiev initiated and conducted the first complete cycle of Wagner's “The Ring of the Nibelung” at the Mariinsky Theater. Its design and concept mirror the many aspects of the Ossetian culture Gergiev longed to share with the public. The production was presented in Wales and the US in 2006 to great success.

In August 2008 Gergiev and the orchestra of the Mariinsky Theater performed on the overcrowded streets of Tshinval in memory of those killed in the armed conflict in South Ossetia. The performance played quite a significant role in the conductor’s life, as he is also a consistent supporter of peace in the Caucasus and hated to see his motherland torn apart by war and conflict.

The art of conducting

A number of music critics say that Gergiev has his own unique way of both directing the orchestra and reading the score. Moreover, he has is reputed for his abrasive, yet passionate, conducting style. Curiously, he often conducts using a toothpick as a baton - a habit the great conductor says he isn’t about to change. 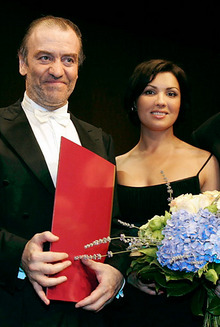 Valery has received numerous awards and prizes, justifying his title as one of the most talented conductors of the day. Gergiev won the State Prize of Russia twice, was named Conductor of the Year several times in a row and is a recipient of the "Golden Mask" and many other prestigious awards.

Valery Gergiev has a number of pupils whom he believes are the hope of the country in the field of music and the art of conducting.