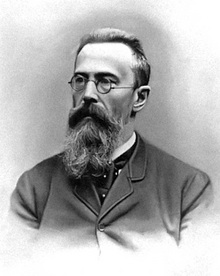 A man of talent, a musician from birth, Nikolay Rimsky-Korsakov was a composer, teacher, conductor, and a well-known public figure.

Nikolay Rimsky-Korsakov was born into an aristocratic family on 18 March 1844 in the small town of Tikhvin in Novgorod Province. His parents already had another son, Voin, who was 22 years older than Nikolay. His father, Andrey Rimsky-Korsakov (1784-1862), was a governor of the Volyn Province and his mother, Sofya (1802-1890), a landowner’s daughter with a good education, fluent French and adept at playing the piano. Due to his ardor for music, young Nikolay was taught to understand the main principles of this art and eventually developed good practical and theoretical skills. The town where Rimsky-Korsakov lived with his family was rich in cultural traditions and Russian folk songs. This helped form his musical taste and a sense of beauty.

Nikolay’s parents noticed his unusual talent and skills very early, when the boy was three year old and could accompany his father’s piano playing with his drum. Still, little Nikolay didn’t think about a career in music. His desires were not much different from those of other boys: he wanted to become a naval officer. The sea had always attracted him and later on it would play an important role in his works.

In 1856, Nikolay’s father took him to the Sea Cadet Corps (Naval College). Young Rimsky-Korsakov graduated with honors in 1862 and realized his dream of becoming a naval officer. At this time his father died and the family moved to St. Petersburg.

Nikolay started composing music in childhood, but his conductor’s skills were revealed only when he was a naval officer. Not having any special musical education, he mastered the art step by step with the help of different teachers. The first and the best among them was the pianist Fyodor Kanille, who taught him during 1859-1860. During his years of study in St. Petersburg, the future composer started attending operas and symphonic orchestras. He highly appreciated the works of Glinka, Mendelssohn, Rossini and Schumann. The year of 1861 was marked by the meeting of Rimsky-Korsakov with Miliy Balakirev, a Russian pianist, conductor and composer, known today primarily for his work in promoting nationalism in Russian music. Kanille introduced Nikolay to the famous leader of “The Five” (also known as “The Mighty Handful”). The young composer became a member of Balakirev’s group, which sought to produce a specifically Russian kind of music, rather than imitating European style. The co-members (prominent Modest Musorgsky and César Cui) and Miliy Balakirev himself greatly influenced the formation of Nikolay Rimsky-Korsakov’s personal and artistic character. 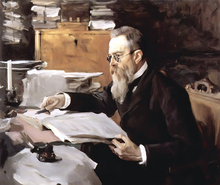 In 1862, Rimsky-Korsakov sailed on a three-year naval cruise, during which he visited the United States, England, France, Italy and many other countries. Working on the ship, Nikolay completed his first major composition – “The First Symphony” (1865). Having reviewed this achievement, “The Five” inspired him to work on “Fantasia on Serbian Themes” and a number of love songs. A few years later the musical genius created pieces of instrumental music (“Sadko” in 1867, “The Second Symphony” in 1868) and his famous opera “The Maid of Pskov” (1872). The audience fell in love with “Sadko” and “The Second Symphony,” the plot of which was built around an eastern fairytale by the Polish-Russian orientalist Osip Senkovsky. Bright and rapidly changing musical pictures resembling wave movements characterize the story. Eastern themes became an integral part of Rimsky-Korsakov’s works.

“The Maid of Pskov” was such a great success that it made Rimsky-Korsakov seriously consider composing as a career. The opera describes the historical period of integration in Russia during the rule of Ivan the Terrible, who is also the opera’s main character.

During the 1870s Rimsky-Korsakov widened his musical activity and became a professor of harmony and orchestration at the St. Petersburg Conservatory. He integrated all of his knowledge on folk songs, national fairytales and traditions into his music and teachings. While he had previously been strongly against Western compositional methods, in the 1870s Rimsky-Korsakov reconsidered this question and spent about three years studying Western techniques, eventually incorporating them into his art. Between 1873 and 1884 he worked as an inspector of naval bands, which helped him continue his service as a naval officer. He supervised and inspected bands all over Russia. After that he worked as a director at the Free Music School (1874-1881).

Rimsky-Korsakov managed to combine his busy job and creative work. His other great opera, written with diligence and love, was “May Night.” The composer was greatly inspired by the literary works of the Russian writer Gogol (who is thought to be the founder of Russian realism), especially by the author’s mythological characters and rich depictions of village life, with its old customs and fantastic and supernatural elements. The opera was first presented on 9 January 1880 at the Mariinsky Theater and was met with loud applause from the audience.

The mythological theme was characteristic of several of the composer’s works. His next inspiration was Ostrovsky’s fairytale play “Snow Maiden,” which became the basis for his opera of the same name (1881). The story deals with the opposition of eternal forces of nature and involves the interactions of mythological characters, half-real creatures and real people. The “Snow Maiden” remained the musician's own favorite work.

From 1881 to 1888 Rimsky-Korsakov’s progress as a composer came to standstill; he was paralyzed creatively. But he eventually recovered and continued to create masterpieces, although his later works were written from a very distinctive psychological point of view. Rimsky-Korsakov tried to discover the deep inner world of the human psyche. Two good examples of these pieces of music are “Mozart and Salieri” (1897) and “The Tsar’s Fiancée” (1898). 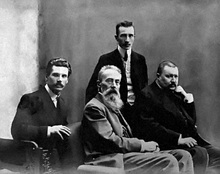 During the Revolution of 1905-1907 (a wave of mass political unrest throughout the Russian Empire) Rimsky-Korsakov supported about 100 students of the St. Petersburg Conservatory who took part in the uprising and were expelled. For this, he lost his professorship and his works were banned by the police. In response, many students and teachers protested in support of the famous artist and in a few months’ time he was reinstated. But he continued to express his political views in his opera “The Golden Cockerel” (1907), which critics described as a “razor-sharp satire of the autocracy, of Russian imperialism and of the Russian-Japanese war.” This work designated the end of Rimsky-Korsakov’s creative life.

Both Nikolay’s professional and private lives were very successful. Apart from being a great musician, Rimsky-Korsakov was also a great husband and father. He met his future wife at a meeting of “The Five” where he was introduced to two charming sisters, Aleksandra and Nadezhda Purgold. Nadezhda played piano and Aleksandra had a very beautiful soprano voice. Nadezhda and Nikolay supplemented each other in performing works by composers of “The Mighty Handful.” During this time Nikolay was busy creating his opera “The Maid of Pskov,” which became the main topic for discussions between Nadezhda and Nikolay. Over a period of time the young couple fell in love and married in 1872. They were very happy together and had seven children.

The legacy of Rimsky-Korsakov’s music lives on to this day. In his works he expressed the beauty of the people’s soul, his dream of a better future and his faith in truth and justice.

Bulat Okudzhava In Russia, everyone knows who Bulat Okudzhava was and what he did. Today festivals are held in his honor, his poems are taught at school, he’s known as a founder of the so-called “bard movement”.