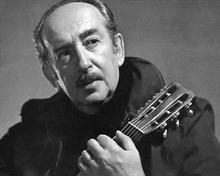 The inscription on Galich’s black tombstone says: "Blessed Are Those Banished for the Sake of the Truth."

Aleksandr Galich (real last name Ginzburg) was a prominent Russian poet, bard, scriptwriter, songwriter and singer. Although his verses and songs were never published in his native country during his lifetime, they were nonetheless known by all. He openly told the heartfelt truth about the totalitarian Soviet regime, without fear. For this he was banished from Russia in 1974, and died in exile.

Galich, who was linked to the struggle for human rights in the Soviet Union, was a friend of both Sakharov and Solzhenitsyn. His voice in Russia was silenced, but his bonds with Russia were never broken. Although he traveled extensively in the West, his most cherished dream was to return to his native land.

Aleksandr Ginzburg was born in Yekaterinoslav (now Dnepropetrovsk) into a family of Jewish intellectuals. He spent most of his childhood in Sevastopol. Before World War II he entered the Gorky Literature Institute and then moved to the Stanislavsky Opera and Drama Studio and later to the Arbuzov and Pluchek Theater Studio in 1939.

In the early period of his creative career Galich wrote a number of theater songs and film scripts. From the late 1950s he started writing songs and performing them to the accompaniment of his seven-string guitar. In some way springing from the romantic tradition and the art of Aleksandr Vertinsky, Galich developed his own trend within this genre.

His songs were more like recitals to the accompaniment of his guitar. They were taped only by amateurs, since Galich was not allowed to give official concerts. He sang semi-illegally in clubs, in small concert halls, or simply in the homes of his friends. Nevertheless his concerts were taped by his fans, and the tapes reached all parts of Russia. His songs were secretly typewritten and spread among friends and acquaintances. All this began in the 1960s.

Soviet authorities had a difficult time stifling the bards’ voices. While the Kremlin controlled ownership of printing presses, reel-to-reel tape recorders were permitted in people's homes. Song collecting was widely popular, and bards' subversive verses could hide among less provocative songs extolling the joys of traveling or the outdoors. Magnitizdat, a term used to describe the process of re-copying and self distributing live audio tape recordings in the Soviet Union, in fact, proved to be a more enduring medium for disseminating ideas than the printed word.

Samizdat (the underground printed press) was very limited. You could print four copies to give away, but after ten or twelve readings, it was gone. Very rarely would someone else retype it. With magnitizdat, it was different. After every concert, a copy could be made and it would disseminate very rapidly. It was a chain reaction.

Of course, the widespread popularity of the magnitizdat movement was not enough to shield its members from KGB repression. Galich was punished for fearlessly confronting the complex issues of Soviet society (in one song, he told of Gulag prisoners so brainwashed by the regime they cried with their guards when Stalin died).

Finally Aleksandr Galich was forced to leave the Soviet Union for his magnitizdat recordings. Galich's friends and family wondered whether the KGB had something to do with the singer's death.

Stalin's personality cult had already been exposed, and people felt greater freedom under the Khruschev government - a time that would later be referred to as the ideological thaw. However Khruschev was deposed and the regime toughened once again. Philosopher Lev Ventsov recalls: "Then something unusual happened. Our culture began to acquire amateur forms. Friends gathered in small flats not only to relax, but also to express their feelings. Those were not political gatherings. They acquired political tinge only because participants in them exercised their right to cultural freedom." 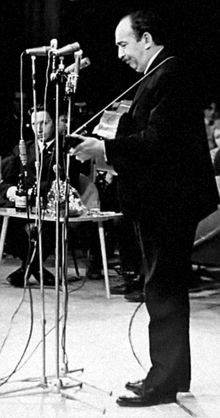 Such gatherings were where Aleksandr Galich sang his first songs - satirical songs about officialdom and dramatic ballads devoted to the memory of outstanding Russian cultural workers like writer Zoshchenko, poet Mandelstam and actor Mihoels, all victimized by the Stalinist regime. He sang about ordinary people, about labor camp prisoners, such as the nameless hero of his song "The Clouds." The existence of political persecution was accepted by public consciousness as an established fact in the country. At the same time the individual groups, circles and campaigns, for which nonconformity had become a mode of existence, were becoming closer acquainted and forging ties and alliances.

The dissident movement, of which Galich was a member, made the informational bulletin Chronicle of Current Events its acknowledged press body. It was published anonymously from the spring of 1968 until 1983. The bulletin shed light on cases of human rights abuses and violations in the USSR. In 1970 a human rights committee was established in the USSR, which comprised physician and academician Andrey Sakharov, publicist Igor Shafarevich and writer Aleksandr Solzhenitsyn. The committee enjoyed membership in the International Human Rights League, a fact that provided its members with certain guarantees from political persecution. In 1973 a Russian branch of the League emerged, under the name of “Amnesty International.”

During World War II, Galich's health prevented him from going to the front. But he saw the inside of the war, its truth and blood, when touring hospitals with a team of other performers or giving concerts on hospital trains for the wounded.

In the 1940s and 1950s Galich wrote his first plays – “lyrical nonsense,” as he described them. At the same time he was the author of a drama, “The Matrosskaya Prison,” whose premiere was to open the new theatrical studio, which later became the famous "Sovremennik" theater. However the play was banned after its dress rehearsal. The officials in charge of the country's culture in those years declared that the hero of a Soviet play could not be a Jew. They paid little attention to the fact that the play was about a man whose fate was shared by many Russians, Ukrainians and people from other ethnic groups and that it reflected what had happened in the country in the 1920s, 1930s and 1940s.

Now the play has been staged by the theater company of Oleg Tabakov, an actor and director who was to participate in the banned premiere.

In the 1950s and 1960s Galich also wrote scripts for various films, which included a comedy, "Reliable Friends," and "In the Seven Winds," considered one of the best Russian pictures about World War II. It was a film about human feelings, faithfulness, tenderness and loneliness.

During the Brezhnev era of stagnation in the history of the Soviet Union, camping, especially in its extreme forms such as alpinism, kayaking or canoeing became a form of escapism for young people, who felt that these activities were the only ways of life in which such values as courage, friendship, risk, trust, cooperation, and mutual support still mattered. 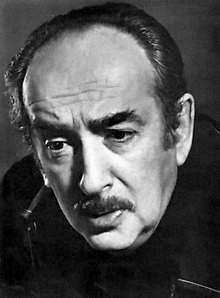 1968 saw an event that frightened the authorities. In Novosibirsk, one of the biggest cities in Siberia, a festival of bards' songs was held. When Galich presented his ballad devoted to the memory of Boris Pasternak, the audience rose, silently expressing solidarity with the author, love for the outstanding novelist and hatred for those who had harassed him.

Soon Galich was expelled from the unions of Soviet writers and cinematographers. He was virtually denied the opportunity to earn his living. But he had no intention of repenting. "I have been deprived of my literary rights," Galich wrote in an open letter. "But my obligations - to write songs and sing them - are still with me."

In 1974 the authorities forced Galich to leave his country. "I am embarking on the sorrowful road of exile," he wrote in his autobiographical novel "Dress Rehearsal." "I am leaving the Soviet Union, but not Russia. My Russia will stay with me forever!" To Galich Russia meant language and culture. The only thing he took along was a collection of works by the great Russian 19th century poet Aleksandr Pushkin.

Since that time, his voice could be heard only through the radio station "Liberty." His friend, novelist Yury Nagibin, recalls: "Galich was free to sing his songs and publish his verses; he was recognized and respected, but no one could say that he was happy. He did not complain, but there was profound nostalgia in his poems."

In his last radio program presented on December 15, 1977, four days before his death, Galich sent New Year's greetings to his compatriots. He said: "Our country is amazingly rich and generous. Its mineral wealth includes every element of Mendeleyev's Table. Only one element is lacking - happiness. I wish that someone would add this element - happiness - to Mendeleyev's Table, because we have the right to be happy."