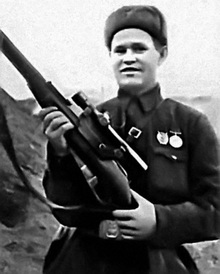 This Hero of the Soviet Union killed more than 300 Nazi soldiers in the Battle of Stalingrad during World War II and taught scores of other snipers.

Vasily Zaitsev was born into a family of peasants in the village of Yelenovsk in the Chelyabinsk Region in the Urals.

His grandfather taught him to hunt at a very early age – as a child, Vasily would spend days in the taiga together with his younger brother, tracking wolves, setting traps and sleeping in the snow. He brought home his first trophy at the age of twelve: a wolf that he shot with a single bullet from his first personal weapon, a large single-barreled Berdan rifle, which he was just barely able to carry behind his back at the time. As bullets were scarce, Vasily learnt to pull the trigger just once per animal. This is how he grew up to become a sharpshooter.

In 1937 Vasily was recruited into the Red Army. Despite his small frame, he was sent to serve in the Soviet Navy in the Pacific, near Vladivostok. But when Nazi forces invaded the Soviet Union, Zaitsev, like many of his comrades, volunteered to be transferred to the frontline. At the time he had already reached the rank of Sergeant Major.

On the eve of 22 September 1942 Zaitsev crossed the Volga River and joined the 1047th Rifle Regiment of the 284th Rifle Division of the 62nd Army. He made a name for himself during the first encounters with the enemy in the flame-lit city. Then one day, Zaitsev’s commanding officer called him up and pointed at an enemy officer in a window 800 meters away. Vasily took aim from his standard-issue Mossin-Nagant rifle, and with one shot, the officer was down. In less than a few moments, two other Nazi soldiers appeared in the window, checking their fallen officer. Vasily fired two more shots, and they were killed. For this, together with the Medal for Valor, Vasily was also awarded a sniper rifle.

Vasily Zaitsev’s name quickly became known across the Soviet Union; between 10 November and 17 December he was credited with 225 verified kills, 11 of them snipers. The Soviets soon organized a school of snipers based in a metal hardware factory, marking the beginning of the sniper movement in the Red Army.

“For us there was no land beyond the Volga,” Zaitsev once said in a famous quote, revealing his fervent loyalty to the Motherland.

Zaitsev would hide in all sorts of locations – on high ground, under rubble, in water pipes. After a few kills he would change his position. Together with his partner Nikolay Kulikov, Zaitsev would hide and sting. One of Zaitsev’s common tactics was to cover one large area from three positions with two men at each point – a sniper and scout. This tactic, known as the “sixes,” is still in use today and was implemented during the war in Chechnya.

In his memoirs, Vasily recalls a certain sly Nazi sniper he tracked for a week – they called him the

“Supersniper.” He was allegedly Heinz Thorvald, aka Erwin König, a high-ranking Werhmacht officer and head of the Berlin sniper school. There is little known about König’s identify. He reportedly came to Stalingrad to kill Zaitsev, who had already caused much havoc and drained Nazi morale. Zaitsev writes that the sniper was highly skilled and was very hard to find. But when two of Vasily’s comrades were injured by a sniper, Zaitsev and Kulikov began searching the area, and Vasily noticed a glimpse of light under a piece of metal. When Kulikov lifted a helmet on a stick from a window, Erwin König fired and revealed himself as he peeked to see whether his target was dead. It was then that Zaitsev shot him in the head. 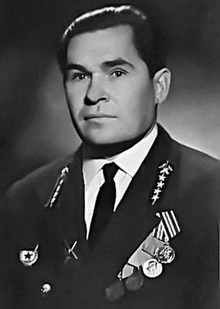 The sniper duel is loosely depicted in the feature film “Enemy at the Gates,” directed by Jean-Jacques Annaud and starring Jude Law as Zaitsev and Ed Harris as Major König.

Vasily continued teaching Soviet soldiers while sniping Nazi troops until January 1943 when he was severely wounded and blinded by a mortar. He was taken to Moscow, where he was operated on by Professor Filatov, the famous Russian ophthalmologist. While he was in hospital, his rifle was given to the best snipers in his school. His students, the “zaichata,” were credited with more than 6,000 kills during World War II.

With his sense of sight restored, Zaitsev returned to the frontline, where he continued teaching snipers, commandeered a mortar platoon and became a Regiment Commander. He fought in Ukraine, at the Dnepr and in Odessa, sniping the enemy at the Dniestr River. But during the victorious day of 9 May 1945, he was in hospital again. He ended the war with the rank of Captain.

After the war, Zaitsev lived in Kiev, where he studied at a textile university and then worked as an engineer before becoming the director of a textile plant. Vasily Zaitsev died in 1991 and was buried in Kiev, although his final request was to be buried in the land he fought so hard to defend – Stalingrad. His wish came true on the 63rd anniversary of the Battle of Stalingrad, when Vasily Zaitsev was reburied with full military honors at Mamayev Kurgan in Volgograd, a monument in honor of the millions of victims of the battle. His rifle is on display in the Museum for the Defense of Stalingrad.