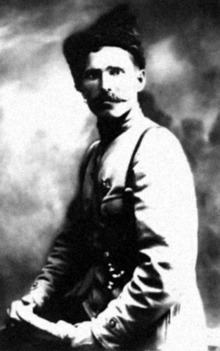 Petka and Vasily Ivanovich are in a sauna. Petka is washing Chapay’s back with a sponge. “Hey, Vasily Ivanovich, you've got that T-shirt on that you said went missing a few weeks ago!”

This is just one of a myriad of jokes about Vasily Chapaev and his comrade-in-arms Petka. A military genius, a mythical hero, a part of the Soviet propaganda spin – Chapaev’s life and death remain surrounded by doubt and debate. A Red Army commander during the Russian Civil War, he was turned into a Soviet myth… and lives on in the Russian popular culture as the hero of jokes.

Vasily Chapaev was born into a peasant family in the village of Budayka, now part of the city of Cheboksary in Central European Russia. Together with his father and brothers the youngster worked as a carpenter. Drafted in during the World War I, he received several awards for bravery in battle. In 1917 he joined the Bolshevik party and soon started a meteoric rise through the military ranks.

After a short spell in the Military Academy to learn more of his craft, Chapaev volunteered back to the frontline and his career went from strength to strength. He was said to be a talented commander and an experienced soldier, strong willed, resourceful and fearless. Chapaev’s 25th Rifle Division knew no defeat.

But on September 5, 1919 its headquarters near the town of Lbishchensk (now renamed Chapaev) in Kazakhstan were ambushed by the White Army. The official story goes that the wounded Chapaev drowned trying to swim the Ural River to escape the Whites. He was never again seen alive and his body was never recovered.

Protagonist of a blockbuster 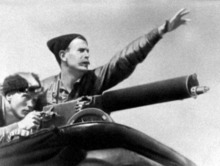 Now described by some historians as only a minor Civil War hero, back in the 1920s Chapaev was transformed into a revered idol by Dmitry Furmanov’s best-selling novel Chapaev. And after a hugely popular movie by the same name, the man and the myth became one and the same for good. When the film was out in 1934, people saw it countless times and knew many dialogues by heart.

Yet, his fame had a reverse side. To counter official Soviet propaganda, Chapaev was transformed into a popular comic character through word-of-mouth. In the flood of jokes from the 1960s and 70s, he’s a boorish foul-mouthed heavy drinker. Chapay, as he’s sometimes fondly called, has two sidekicks, Petka – his faithful comrade-in-arms and a fiery and beautiful female machine-gunner Anka.

While Petka’s character was supposedly based on a real person, Anka was said to have been invented for the book and the movie to put more zest in the story. Chapaev jokes continue to be among Russian’s favourites and a recent Russian video game even featured Chapaev saving the Galaxy from aliens.