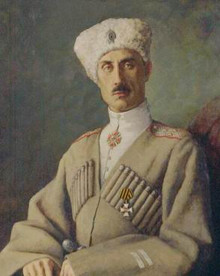 Pyotr Wrangel was a high-ranking officer in the Russian army who became one of the leading commanding officers of the White Guards (the troops that remained loyal to the fallen Tsar Nicholas II) during the Russian Civil War (1918-1921). He was the last commander to leave the European part of the Soviet Republic in November 1920. During the Soviet era he was either ignored by historians or portrayed in a negative light. In the 1970s some people in the USSR thought he was a jeans manufacturer because they read the label “Wrangler” as ‘Wrangel” but this was quite a common mistake for people who did not know a word of English.

The name of Pyotr Wrangel’s distant relative – the outstanding Russian explorer, Ferdinand Wrangel – was given to an island in the Arctic Ocean as well as to a number of other geographic locations in the Pacific and the Arctic Oceans.

Pyotr Nikolaevich Wrangel was born in 1878 in the Lithuanian city of Zarazai. His ancestors descended from a Danish noble family. Many of the Wrangels were officers and generals in various European armies. One of Pyotr’s remote relatives was Ferdinand von Wrangel, the 19th century Arctic explorer. Shortly after Pyotr’s birth, the Wrangels moved to the south of Russia to an area populated by Cossacks. In his early years Pyotr excelled in various physical activities. He and his younger brother often went hunting with their father, Nikolay Egorovich, who wrote about those times in his biography: “I could not master the shooting without preparations. The shots always went wide. My boys, especially Pyotr, are much better shooters than I.”

Wrangel’s father was a successful businessman. Nikolay Egorovich hoped that Pyotr would one day take over his operations. One of his branches of business was connected with gold mining. For this reason Pyotr decided to enter the Mining Institute in St. Petersburg in 1896.

Pyotr was not a typical student. He never attended any of the revolutionary meetings like many of his classmates; Wrangel was a fan of the monarchy throughout his life. He liked going to balls and high society happenings – it was quite a site to see the young Wrangel dressed in the uniform of the mining institute at these events. He successfully received a diploma in mining engineering in 1901. But before devoting himself to his father’s business he had to serve in the army – like all the Wrangels before him.

Wrangel volunteered for the cavalry and immediately liked it. He was commissioned to the rank of officer in 1902 in spite of the fact that once, in a state of rage, he had cut down all the flowers in front of the commanders’ yard with his saber. After two years of service he went to Siberia to work at his father’s mine where he earned a reputation for his hot temper and his love of champagne. His engineering career, however, was short-lived. First, Pyotr was promoted to the post of special envoy to the Irkutsk region in Siberia. Then, in 1904, when Russia entered the war with Japan, Wrangel volunteered to the army.

Throughout the war he served as a cornet of the Cossack cavalry in Trans-Baikal area. During the first years he showed the utmost bravery, which earned him the title of the “Cossack Captain.” He was awarded with the Orders of St. Anna and St. Stanislav (both 3rd degree). After the war Wrangel decided to pursue the career of a senior officer – he was no longer interested in mining.

In 1906 Wrangel was transferred to the Finland Regiment. He became a member of the punitive expedition forces in the Baltic region under the commandment of General Nikolay Orlov. All that year he studied hard to enter the Nikolaevsky Military Academy of the General Staff, which he successfully did in 1907. Three years later he was again one of the best, placing seventh out of 50 graduates. Nevertheless, he made a surprising decision not to become a staff officer - he joined his cavalry regiment and by 1912 he had become the squadron commander. In 1913 he was promoted to the rank of the colonel. In this position Wrangel entered World War I.

Right at the beginning of the Russian campaign, Wrangel excelled in a battle near the township of Kaushen in Eastern Prussia (modern-day Kaliningrad Region). He approached the trenches of the enemy and even after his horse was killed he managed to crush his opponents in a fistfight. For this success he was appointed Chief of Staff of the United Cavalry Division and awarded the Order of St. George (4th degree). Half a year later he was awarded the Guns of St. George for his bravery during the offensive in Eastern Poland.

It always pained Wrangel to remember the loss his units during WWI. Wrangel realized that he did not have enough time to bring up good soldiers when the good ones died during the first months of this campaign. Seeing looters take the belongings of the dead soldiers from the field always infuriated him. His ability to oversee combat operations earned Wrangel the rank of Major General in January 1917. By that time he was commanding a division at the Southwestern front in Romania. Right at the time of the February Democratic Revolution that deposed the Tsar he had a little treat – his wife Olga, who worked in a field hospital, came to visit him.

Immediately after the February Revolution Wrangel became very critical of the actions of the Provisional Government that took control of Russia. He did his best to preserve discipline at the front. He was also doubtful of the capacity of the Soviets and the Soldiers’ Councils. Pyotr Nikolaevich doubted that these councils would help the army’s ability to fight. After performing brilliant defensive operations in Western Ukraine, Wrangel was awarded the Cross of St. George (4th degree). But he could not deter the anarchy that was spreading through the Russian Army and by the middle of September he decided to resign.

Fighting against the Revolution

After the Bolsheviks took power in the October Revolution of 1917, Wrangel realized that he could no longer stay in the capital due to the anarchy and poverty that reigned there. He moved to the south, to the port city of Yalta in the Crimean Peninsula, where he was eventually arrested by Bolshevik sailors. His wife Olga witnessed the moment of his arrest. She decided to go to prison with her husband. Wrangel and his wife were the only ones who were not executed that night. The sailors were shocked by Olga’s bravery and the couple was set free.

After his escape from the Crimea Wrangel refused the offer of the Ukrainian leader, Hetman Pavlo Skoropadsky, to take control of the troops that would fight for an independent Ukraine. Instead he went to the Ekaterinodar area (now Krasnodar). At the request of General Anton Denikin, the commander of the White Guard forces, he joined the Volunteer Army and became the Chief of the Cavalry Corps. In the spring of 1919 Pyotr Nikolaevich took control of the entire army in the Caucasus Peninsula. He managed to take the city of Tsaritsyn (later Stalingrad, now Volgograd). During that time Wrangel proved to be a good administrator and manager.

Following the heavy losses suffered by the White Guards in their failure to capture Moscow in April 1920, Anton Denikin handed his commanding post to Pyotr Wrangel, who became the commanding general of the entire Volunteer Army. In 1920, the troops loyal to the Tsar were renamed into “The Russian Army,” on Wrangel’s initiative. He made his base in the Crimean Peninsula. Military historians explain the success of Wrangel’s resistance by the fact that in spring 1920 the Bolsheviks began the war with Poland and they did not have enough resources to fight on several fronts.

As head of the coalition government Pyotr NIkolaevich carried out land reform in the Crimea. His “right-hand man” in the process was Aleksandr Krivoshein, a Russian economist and banker who came to the peninsula upon Wrangel’s invitation to become the Prime Minister. Crimean authorities issued a decree, according to which any peasant could easily take the land of a rich landlord and work on it. For this he would only have to give one fifth of his harvest. That measure gave a huge boost to the development of the local economy. The peasant’s market in the administrative center of Simpheropol was one of the largest and busiest in the south of Russia. The Crimean peninsula in 1920 was the only territory in Europe that sld bread and grain beyond its borders. Many prominent scholars from St. Petersburg came to teach at the Tavria University in Simpheropol. Wrangel and Krivoshein also did their best to establish economic and cultural ties with anti-Bolshevik governments in Ukraine and Georgia.

Despite his numerous positive steps, many historians have compared Wrangel to the Spanish dictator Fransico Franco and the Chilean president Augusto Pinochet, who were strong advocates of economic reforms at the expense of civil liberties and human rights. Wrangel behaved very fiercely against any attempts to undermine his rule. His secret police executed anyone who had even minor disagreements with the Crimean authorities.

In the fall of 1920 Wrangel’s forces were finally crushed by the huge Bolshevik offensive campaign. On 14 November Pyotr Nikolayevich decided to flee the Crimea – he organized a mass evacuation with various vessels that crossed the Black Sea to Istanbul and other Turkish ports. Every officer, soldier and civilian was given a free choice: either to evacuate or remain in Russia and face the wrath of the Red Army. Hundreds of thousands listened to the commander and decided to flee.

After brief stops in Turkey and Tunisia, Wrangel ended up in Serbia, where he did his best to organize Russian refugees into resistance groups. He gained a reputation as one of the most respected Russian émigrés. However, Wrangel lacked the necessary funds to set up a huge political force capable of challenging the Bolsheviks. After that failure he moved to Brussels where he died in 1928. Some historians say that he was poisoned by a member of the Soviet secret services but no proof has been found to support this theory. Pyotr Nikolaevich Wrangel was buried inside the Holy Trinity Russian Orthodox Church in the Serbian capital of Belgrade.