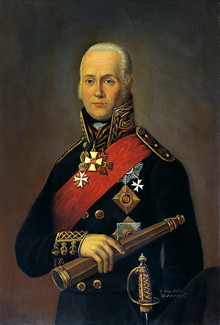 Fyodor Ushakov was responsible for the modernization of the Russian Navy in the 18th century. His military operations are still carefully studied in naval academies worldwide today – over 200 years later.

Learning to be tough

Fyodor Ushakov was born into a small noble family in the village of Burnakovo in the Yaroslavl region, 100 miles north of Moscow. His parents were highly religious people. Young Fyodor learnt the basic values of life from his uncle, a monk. Unlike other noble boys – who preferred to stay within the confines of their estates – he often mixed with the villagers. By 14 he was strong enough to hunt bears with the elders of the neighboring village.

At 16 Ushakov enrolled in the Naval College of St. Petersburg. The college had a slack disciplinary policy and many of the young cadets indulged freely in the temptations of the big city. Ushakov, however, was more interested in his studies He paid special attention to the subjects of arithmetic, navigation and history and was always at the top of his class.

Five years later, in 1765, Ushakov graduated with the rank of midshipman and immediately began serving in the Baltic Fleet on a galley. He took part in excursions from the naval base of Kronstadt near St. Petersburg to the Port of Arkhangelsk in the Barents Sea and Sweden. The waters of the Baltic Sea and the Arctic Ocean were very difficult to navigate and proved to be a real test for young Fyodor, who listened to the experienced officers and learned to survive under harsh conditions. 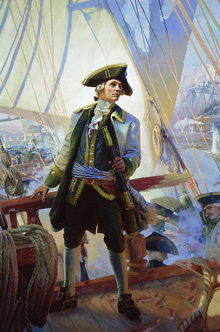 In the southern seas

In 1768 the war between Russia and Turkey broke out on the Black Sea. That same year Ushakov was transferred to the Don Flotilla – serving first in the city of Taganrog on the neighboring Azov Sea, then as the captain of a small ship on the Black Sea, where he took part in combat operations for the first time. Finally he was given a mission to defend Russian trade ships in the Mediterranean Sea from attacks by British pirates.

These experiences proved crucial to the development of Ushakov’s commanding skills. He analyzed the battles to work out his own strategy for mounting offensives. Ushakov classified the differences between Russian and European naval combat organization. In France and Britain the Navy often used so-called “linear tactics,” in which the idea was to attack the enemy’s fleet all at once, the row of ships cutting any chances for the opponent to make a tricky moves. This powerful tactic had one serious drawback - it hindered the captains of the combat vessels to show their own initiative. At that time the Turkish fleet also employed this tactic. The commanders of the Russian Navy were constantly trying to find new and different ways to break the “Western rules of engagement.” Ushakov greatly admired the outstanding Russian Admiral Grigory Spiridonov. In 1770, in the Battle of Chesma, the Admiral organized a skillful maneuver in which a specially-assigned ship group secured artillery support of the fire ships that attacked from the front. This “breaking of the line” destroyed most of the Turkish Fleet.

Like his predecessors, Ushakov was always open to new ideas and original solutions. After the Russian Empire annexed the Crimean Peninsula, Ushakov personally supervised the construction of a naval base in Sevastopol, which would become the stronghold of the Russian Navy on the Black Sea. He also oversaw the building of docks in the city of Kherson. Under his command the troops completed their task despite an outbreak of the plague. Ushakov made sure there were enough doctors in the area to fight the disease and also ordered some of the military commanders to study the basics of medicine. 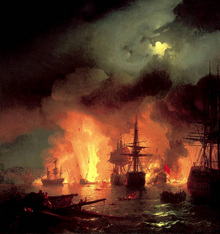 Ushakov always had in mind the words of Peter the Great: “Regulations should not be followed blindfold because they specify general ways of behavior with no mention of emergency cases and extreme situations.” Ushakov’s maneuvering tactics did not exclude “the line” completely; he tried to incorporate it in various offensive tactics such as outflanking or  breaking-up the enemy’s columns.

Ushakov had a chance to show his potential during the second war between Russia and Turkey in 1788 in the battle near Fidonisi Island, a joint effort of fleet and infantry led by the outstanding Russian commander Aleksandr Suvorov. In the early stages of the battle Ushakov realized that the Turks by far outnumbered his troops. He seized the initiative and directed his offensive at the Turkish flagship of the first column – something the Turks did not expect.

Ushakov’s vessel was at the very front of the line. It became his favorite pattern during future battles – and it always brought success. Thanks to Ushakov’s victories Russian infantry troops attacked Ochakov Fortress in July 1788. By 6 December the major fortress of the Turkish forces fell to the Russians.

In March of 1790 Ushakov was promoted to the rank of Rear-Admiral –in charge of the entire Black Sea Navy. On 8 July 1790, near the Crimean city of Kerch., the crucial battle of the second Russo-Turkish War took place . This successful battle undermined Turkish plans to land their troops on the Crimean peninsula. Most of the Turkish ships were seriously damaged – the enemy suffered serious losses. On 12 July Ushakov returned to Sevastopol “with flying colors” and praise from the Russian Empress Catherine the Great. He successfully finished off the campaign with the defeats of the Turkish fleet near Tendrovo in 1790 and near Caliakria in 1791. Ushakov’s victories at sea, together with the triumphs of the Russian infantry under the command of Aleksand Suvorov, granted the Russian Empire access to the Black Sea’s northern coast.

After the war Ushakov was put in charge of renovating the fleet. In 1793 he was appointed Vice-Admiral.

The Mediterranean and beyond

In 1798 Ushakov led another prominent campaign – the battle against the French Navy, which was gaining strength under Napoleon. The Russians entered the hostilities on the request of the Ottoman Empire – Russia’s enemy just eight years earlier. In August of 1798 Ushakov left Sevastopol with a squadron of six battleships, seven frigates and three message vessels carrying almost two thousand men. A Turkish squadron of four battleships, six frigates and 14 gunboats reinforced Ushakov’s squadron. From 28 September to 5 November 1798, Admiral Fyodor Ushakov successfully knocked the French out from the most crucial ports of the Mediterranean Sea - Cerigo, Zante, Kefalonia and the Santa Maura Islands. Then the fleet began an effective blockade of Corfu Island – the stronghold of the French Fleet and the gate to the Adriatic Sea at that time. Napoleon and his construction engineers turned the island into a heavily fortified area.

Ushakov was aware that a decisive assault of the Corfu fortress required close cooperation and combined actions of all the parties involved. However, the Turkish Commandment failed to fulfill its direct task on adequate food supply. Despite all the difficulties, Ushakov actively prepared for the upcoming offensive. Having carefully examined approaches to Corfu, he came to the conclusion that the Vido Island was the key – and he was right. Ushakov conducted a series of training sessions and spent a lot of time communicating with his troops, finally devising a special table of 130 flag-signals. Ushakov took over the Vido Island in February of 1799. Simultaneously, the ground troops launched a land storm of the Corfu fortress. The first attack was rebuffed, while the second one was a success. The French commander sent Ushakov a letter in which he asked for a 24-hour truce, after which time he would sign the capitulation act. On the very next day, French General Chabot came to Ushakov’s ship, the Saint Paul, to sign the act of unconditional surrender. Many historians say the success of the battle resulted from Ushakov’s ability to assess the tactical situation and attack Corfu from sea. It is considered one of history’s most brilliantly fought naval battles. After that, Ushakov was promoted to the rank of full Admiral.

Ushakov continued his mission in Mediterranean  – he assisted Field Marshal Aleksandr Suvorov in all ways possible. He even contributed to Suvorov’s legendary plan for crossing the Alps through St. Gotthard and the Devil’s Bridge. 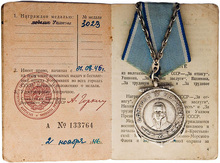 At the same time, Ushakov was engaged in making his own plans of another offensive against the French, this time with British Admiral Horatio Nelson. However, the Battle of Trafalgar hero was reluctant to cooperate with the Russians. Before planning a session with Ushakov Nelson made a very attractive proposal to the French: in case of capitulation he offered France to retain the right to wage wars in the future. The French naturally agreed to such a “surrender.” Ushakov was enraged by Nelson’s treachery, but still made his sailors march through Rome as a sign of victory - even though the French troops had already left the city.

Ushakov participated in a total of 40 naval battles and lost none of them. However, the new Emperor of Russia, Alexander I, was suspicious of Ushakov and the Admiral soon fell out of his good graces. In 1807 Ushakov retired to the Sanaksar Abbey, 500 kilometers east of Moscow, in the modern Republic of Mordovia. 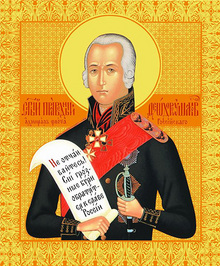 He declined all requests to assist in the defeat of Napoleon in 1812. He never married. His reclusive life ended in October 1817. Fyodor Ushakov was buried at the site of that monastery.

During World War II, on 3 March 1944, the Supreme Soviet of the USSR established the “Order of Ushakov” - one of the highest military awards in the Soviet Navy for generals and officers. In 2001 Fyodor Ushakov was canonized as a saint by the Russian Orthodox Church.