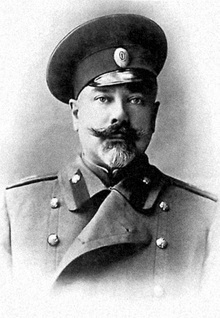 Anton Denikin was one of the most successful leaders of the White movement. A Russian general, he nearly succeeded in defeating the Bolshevik forces in 1919 during the Civil War.

Anton Denikin was born into the family of a Russian officer and a Polish woman. From early childhood Denikin dreamed of being a serviceman. In 1892 he graduated from military college and entered the General Staff Academy in Saint Petersburg, where he studied for two years. Denikin began serving as a staff officer but was soon promoted to the rank of lieutenant colonel.

After the beginning of the Russo-Japanese War in 1904, Anton Denikin asked to be transferred to the acting army. Here he gained his first battle experience and won several distinctions. In 1905 Denikin received the rank of colonel.

Upon the outbreak of World War I Denikin again asked to be assigned to active service. In 1914 he was appointed commander of the “Iron Riflemen”

brigade, which distinguished itself in action and was used in the hottest spots of battle. For his contribution to the Brusilov Offensive (a major point of the Russian effort during World War I) Denikin was promoted to the rank of lieutenant general and was awarded with a golden St. George’s weapon decorated with diamonds. 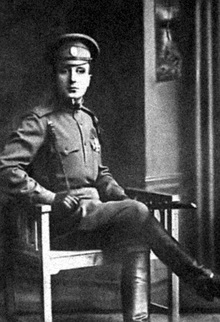 Although Denikin had attained significant achievements even before 1917, it was only after this year that he appeared in the Russian historical arena. He greatly contributed to the political landscape of Russia at the beginning of the 20th century.

After the October Revolution, which took place that same year, power was gained by the Bolsheviks (Communists), led by Vladimir Lenin. The Bolsheviks decided to immediately make peace with the German Empire and the Central Powers, and withdrew Russia from World War I. In March 1918 the peace treaty of Brest-Litovsk was signed, immediately speeding up the formation of anti-Bolshevik groups both inside and outside Russia.

One of the largest anti-Bolshevik forces, known as the White Army, was organized by multi-party military groups, mainly led by former tsarist officers. The conflict between the Bolsheviks’ Red Army and the White Army grew into the Civil War (1917-1923) and Anton Denikin became one of its key figures. 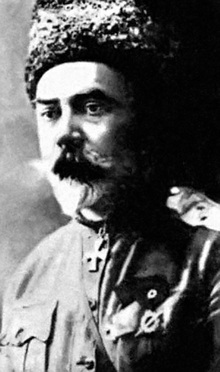 Having arrived in the Don Region in the South of Russia in autumn 1917, Denikin took part in forming one of the main forces of the White movement, the Volunteer Army. This military organization originally consisted of volunteering tsarist officers, cadets and students, but later involved peasants and Don Cossacks as well.

After the death of General Lavr Kornilov in April 1918, Denikin took up the post of the commander of the Volunteer Army, which he merged with the Don Army to form the more powerful Armed Forces of Southern Russia. In order to avoid a split within the White forces, Denikin recognized Admiral Aleksandr Kolchak, the head of the White movement in Eastern Russia, as the Supreme Ruler of Russia.

With the end of World War I in November 1918, the Entente, fearful of Bolshevism, openly intervened in the Civil War, giving support to the White forces. By the beginning of 1919 Denikin had managed to quash Bolshevik resistance in the Northern Caucasus. With weapons and ammunition from the Entente he began preparations for a large-scale attack on Moscow.

Denikin achieved his greatest success during the summer and autumn of 1919. However, he made several strategic mistakes as commander that led to the weakening of his army. According to some historians, Anton Denikin didn’t consider the specific character of the regions where the civil war was taking place and failed to provide a proper agricultural program. Already poorly organized rear services were exacerbated by corruption and speculation. The absence of a supply system led to the “self-supply” of the army and its degradation, with troops turning into gangs of robbers. Having initially captured a lot of territory, the army dispersed and became vulnerable to enemy attacks.

The most controversial aspects of Denikin’s regime in the occupied territories were plunder and violence against Jews. An estimated 100,000 Jews were killed in pogroms perpetrated by various anti-Soviet armies, including the Armed Forces of Southern Russia. According to some sources, Anton Denikin was against these massacres, but was not able to control the actions of his army.

Despite an initially successful wide-front attack and a vast occupied territory, in March 1920 Denikin’s army had to start a hasty retreat to Crimea. Having been pushed to a seacoast, members of the White army either fled or were captured.

In April 1920 Anton Denikin resigned from the post of Commander-in-Chief of the Armed Forces of Southern Russia, handing power over to General Baron Pyotr Wrangel. The same day Denikin left Crimea by ship to Constantinople and then to London. He spent a few months in England before moving to Belgium and later to Hungary. According to historians, Denikin’s financial problems were the main reason for these frequent relocations of his family.

During 1921-1926 Anton Denikin wrote the most well-known of his books, “The Russian Turmoil,” which is still considered by many experts as the most interesting and detailed work on the White movement in Southern Russia. 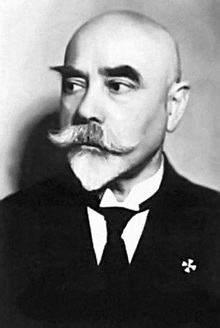 In 1926 Denikin moved his family to Paris where he kept writing books and gave lectures, which were his main source of income.

After the outbreak of World War II Anton Denikin spoke against the Nazi movement, though his criticism of German policy didn’t make him support Soviet rule either. Although Denikin was glad about the victories of the Soviet army during the war, he hoped that after the Germans were defeated, the Communist regime in Russia would be overthrown.

In 1945, Anton Denikin risked being expatriated to the USSR so he moved to the United States, where he died two years later from a heart attack. In 2005 the remains of General Denikin were transferred to Russia and re-buried at the Donskoy Monastery in Moscow.