Trediakovsky was born into the family of an Astrakhan priest. He studied at a school run by Capuchin monks and was to enter the Church. But it was science, not religion, that most attracted him. He ran away from his parents’ home and went to live in Moscow. There he entered the Slavic-Greek-Latin Academy, but soon, spurred by his endless thirst for knowledge, he traveled abroad. Without any money, he put his hopes in his talent and “keen mind.” Trediakovsky spent about two years in Holland before going to France, to the Sorbonne. He made the journey from The Hague to Paris on foot.

Upon his return to Russia, he made his debut with the translation of the French novel entitled “Travel to Island of Love” and at once incurred universal disapproval for the obscene sensuality of the novel. However Trediakovsky had been acknowledged; both his erudition and literary talent were noticed. Anna Ioannovna granted Trediakovsky the position of court poet, and in 1733 he was taken onto the staff of the Academy of Sciences as secretary. In 1745 Trediakovsky was granted the title of Professor. But the existing professors at the Academy of Sciences at the time didn't approve of the Russian “upstart.” Trediakovsky struggled in vain against their intrigues and in 1759 he was dismissed from the Academy. However, he continued to work for the benefit of Russian science. 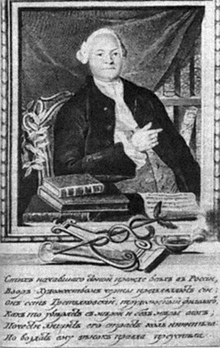 Little by little he published the translations of the works of Sorbonne Professor Rellen, including ten volumes of “Ancient History” and sixteen volumes of “Roman History” along with “Stories About Roman Emperors” by Krevye. Trediakovsky’s largest literary work became “Telemahida” – an exposition of the novel “Adventures of Telemak” by the French writer Fenelon. “Telemahida” incurred the displeasure of Catherine II (these events began in 1766) and as a result Trediakovsky fell into disfavor.

In his treatise he also spoke of the application of poetic meters, a consequence of the introduction of the syllabic-tonic system. Trediakovsky believed that the main meter of Russian poetry should be trochee. He considered iambus to be of little use in Russian poetry and categorically excluded trisyllabic meters. In 1755 another important work by Trediakovsky, “About Ancient, Middle and New Russian Poetry,” saw the light of the day. It was the first work on the history of Russian poetry. As its title suggests, Trediakovsky distinguished three stages in the development of versification. The first stage – which he called “pagan” – was the most ancient and was characterized by the dominance of the tonic versification system (the closest to national poetic creativity). The second stage, from the 17th century up to the beginning of the 18th century, was dominated by the syllabic system. And, according to Trediakovsky, the third and last - modern - stage should affirm the syllabic-tonic system.

Trediakovsky’s works were fundamental in defining the development of Russian literature. But Trediakovsky outlived his recognition and glory. He died in severe poverty on 17 August 1769.