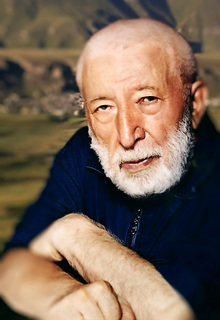 “If you fire at the past from a pistol,
The future will shoot back from a cannon.”

High in the Caucasian Mountains live the peoples of Daghestan, who comprise 36 nationalities, including the Avars. Rasul Gamzatov, People's Poet of Daghestan, was born here.

Over the past fifty years Rasul Gamzatov has been one of the most prolific of Soviet poets. From his pen have come short love lyrics, long narrative poems, ballads, epigrams and philosophical octaves, which have won him millions of devoted readers.

Rasul Gamzatov writes in his native Avar tongue, a language spoken by 170,000 people. The Avars, along with the Darghins, Lezghins and Kumyks are among the largest ethnic groups in the two-million population of Daghestan, where 36 different languages are spoken. According to legend, the horseman who rode across the world distributing languages threw a whole sack full into the mountain gorges and told the people, “Sort them out yourselves!”

The problem of translation is a familiar hurdle to the people of Daghestan, where books are written and published in nine different languages.

Rasul Gamzatov has been fortunate with his Russian translators, Naum Grebnev and Yakov Kozlovsky, many of whose brilliant versions have become classics of Russian poetry. So much so that Rasul himself, reciting his poems in public in the strongly rhythmic guttural Avar tongue, often follows on smoothly and spontaneously with the Russian translation, which he also knows by heart.

…Yet just as I prepare to die
Unnoticed and unsung,
I hear two men go passing by
Who speak my native tongue.

In a deep ravine I lie unseen,
I pine, but they with glee
Relate the wiles of one Hasan,
The intrigues of Ali.

And, as I hear the Avar speech,
My strength comes flowing back—
This is a cure no scholars teach,
A balm the doctors lack.

May other tongues cure other men
In their particular way,
But if tomorrow Avar die,
I’d rather die today!

No matter if it’s hardly used
For high affairs of state,
It is the language that I choose —
To me Avar is great!...

Winner of a Lenin Prize for poetry and honored with the title of People’s Poet of Daghestan, Gamzatov is also Chairman of the Union of Daghestan Writers and a well-known public figure. He has traveled widely in Europe, Asia and America.

Gamzatov was born in the Avar village of Tsada in the northeastern Caucasus, which he exalts in this excerpt from “My Daghestan”:

“My beloved Tsada! I have returned to you from that vast world Father found so many "faults" with. I have traveled all over that world and seen much to marvel at. My sight has been dazzled by an abundance of beauty, unable to settle on any one object. My glance has passed on from one splendid temple to another, one fair face to another, but I have known that, no matter how lovely what I now see is, I shall see something lovelier tomorrow... The world, don't you see, is boundless.

“I crave forgiveness of the pagodas of India, the pyramids of Egypt and the basilicas of Italy; I also crave that forgiveness of the motorways of America, the boulevards of Paris, the parks of Britain, and the mountains of Switzerland, as well as of the women of Poland, Japan and Rome. I have admired you all, but my heartbeat has remained steady; if my pulse has become a little faster it has not done so sufficiently for a feeling of dryness in my mouth or for a sense of momentary dizziness. Can it be that a little village in Daghestan is fairer than Venice, Cairo or Calcutta? Is the Avar woman I see treading a footpath with a load of faggots more comely than a tall fair-haired Scandinavian woman?

“Tsada! I wander in your fields and the cool morning dew bathes my tired feet. I lave my face, not even in mountain rivulets but in the waters of springs. They say that if you are thirsty, drink from a spring that wells up from the earth. It is also said - and Father said the same - that only in two cases should a man fall to his knees - to drink from a spring and to pluck a flower. Tsada, you are my spring. I fall to my knees and drink deep draughts of you.”

His father, Gamzat Tsadasa, was a well-known bard. Bards were held in high honor in Daghestan. In the early twenties of this century when the first Soviet lecturers came to a village, women would sit with their backs to the speaker, who was not supposed to see their faces. But when a bard followed with his songs they would face him out of respect for his art and were even permitted to throw back their veils.

The young Rasul, impatient of any interruption, would listen for hours on end to Avar stories, legends and fables his father would relate. “When I was quite small, he would wrap me in his sheepskin cloak and recite his poems to me, so I knew them all by heart before 1 ever rode a horse or wore a belt." As a boy Rasul would graze a neighbor’s horse for three days with the telling of a story as his reward. In the second form at school he walked twelve miles to see an old man, a friend of his father’s, who knew many songs, poems and legends. The old man sang and recited to the young boy for four days from morning till night. Rasul wrote down what he could and went happily home with a bagful of poems. On another day he would climb half a day to join shepherds in the mountains and walk half a day back just to hear a single poem!

He was eleven when he wrote his first verse. It was a poem about a group of local boys who ran down to the clearing where an airplane had landed for the first time.

His father was his first tutor in the art of poetry. “Of my early poems he said that if you rummaged in the ash you might find at least a glowing ember.”

His first book of poems was entitled “Love Inspired and Fiery Wrath.” Gamzatov was overjoyed when girls in the mountains who had read it wrote to him, and to this day he cannot forget his pain on seeing a shepherd in winter pastures using a page to roll a cigarette. This was in 1943.

My elder brother died twelve years ago
Upon the battlefield of Stalingrad.

My aged mother nurses still her woe
And goes about the house in mourning clad.

And there is pain and bitterness for me
In knowing I am older now than he.

Trained as a schoolteacher, he worked for some time in the theatre and then on a local newspaper. He brought out his first volume of verse in 1937. With a few books of his own in Avar tucked under his arm he arrived in Moscow in 1945 to enter the Gorky Institute of Literature. His enrolment at the Institute was the turning point of his career. There he studied under the country's leading poets and his poems were translated for the first time into Russian, their quality making them part of present-day Russian poetry. About forty collections of poems by Rasul Gamzatov have been published in Makhachkala (the capital of Daghestan) and Moscow. 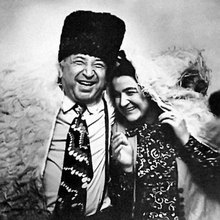 Today he lives with his three daughters Zarema, Patimat and Salikhat in Makhachkala on the shores of the Caspian Sea. His home is open to all. With pride in fine craftsmanship he shows friends his collection of splendid swords, riding cloaks, wine horns and the rust-brown pottery for which Daghestan is famed. Of the land of his birth, of its people and its poets he has drawn a fascinating, intimate and human portrait in his recent prose volume of musings and reminiscences “My Daghestan.”

"My Daghestan. My mountains. My rivers. Hmm, that may be not so bad. But it is only when you are young, at the student age, that you enjoy living in the midst of people. Later on, a man wants to have a room or even a flat of his own. It is not enough to say 'my hearth' - there must be a fire burning in that hearth. Nor is it enough to say 'my cradle' - there must be a babe lying in that cradle. Then, it is not enough to say “my Daghestan” - there must be some idea behind these words: the destiny of Daghestan, Daghestan as it is today. You have all heard of the wisdom of Suleiman Stalsky, our national poet. He understood what I would like to express now. Here is what he said: ‘I am not a Lezghin, or Daghestani, or Caucasian poet. I am a Soviet poet, and a master of all this vast land.’ That is what this white-haired sage Suleiman said. And you keep on harping on one and the same theme - my aul, my mountains, my Daghestan. One might think that for you the whole world begins and ends with Daghestan. Isn't it the Kremlin that marks the beginning of the world? That is what I fail to see in your title. You have created a thorax but forgotten to put a pulsing heart within it. You have created two eyes but forgotten to endow them with the luster of thought. Lifeless eyes look like two grapes, nothing more. Daghestan, you are my love and my vow, my supplication and my prayer. You alone are the main theme of all my books and all my life."

This book is a kind of confession; it expresses the writer's thoughts about life and art. “Rasul” is Arabic for “representative” and indeed Rasul Gamzatov is a worthy representative of Daghestan, telling people in all parts of the world of his land and its inhabitants.

“When you are asked who you are, you can produce a document, your passport, which gives all the particulars about you. When a people is asked what it is, it produces, just like a document, its scientists, its writers, its artists and its statesmen. From early youth one should realize that one has come into the world so as to become a representative of one's people, and should be prepared to assume that role.” - Gamzatov