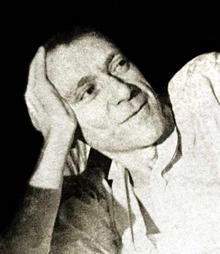 Bulgakov was born in 1891 in Kiev, Ukraine (then a part of the Russian Empire). He was the oldest son of Afanasiy Bulgakov, an assistant professor at the Kiev Theological Academy, who named the first of his five children – Mikhail – after Kiev’s guardian saint.

Despite both of his grandfathers being priests, Bulgakov showed an early interest toward medical science, which he started to study in Kiev University in 1909.

In 1913 Bulgakov married Tatyana Lappa, a local finance ministry official’s daughter, whom he met back in 1908. 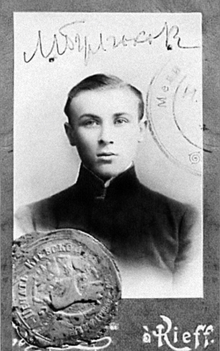 After volunteering with the Red Cross on the outbreak of the First World War, and thus, having to pass the second year of study twice, Bulgakov graduated from the Medical School of Kiev University in 1916. The same year he started to work in a small village hospital in Smolensk region.

There, in 1917 he survived a brief morphine addiction, which lasted till 1918.

After the civil war and rise of the Soviet Union, Bulgakov, who had enlisted in the White Army as a field doctor, ended up in the Caucasus. There he began to work as a journalist.

On November 26, 1919 for the first time a work by Bulgakov was published in a Grozny newspaper. He stayed in the Chechen capital while participating in an anti-terrorist operation as an army doctor.

By 1920 he had given up medicine entirely to concentrate on journalism, and after moving to the North Ossetian capital Vladikavkaz, he became a staff writer for the newly created Kavkaz newspaper. 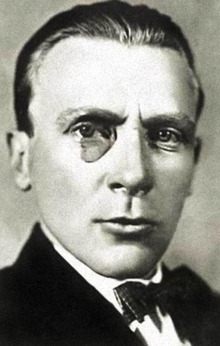 However Bulgakov’s dedication to journalism was short-lived. After being appointed to a major post of the Vladikavkaz revolution committee’s art division, he quickly shifted his attention to theater.

In 1921, having already written a number of plays, he moved to Moscow with wife Tatyana. For three years Bulgakov worked on various literary and journalistic jobs, while writing The White Army – a novel about the life of a White Army officer's family in civil war-era Kiev, parts of which were read during various literary gatherings and other occasions throughout the city.

This was also the time when both Notes of a Young Doctor, based on Bulgakov's work as a country doctor in the 1910s and the Diaboliad – a Kafkaesque tragedy – were written.

During this time, he divorced from Tatyana and married Lyubov Belozerskaya in 1924. 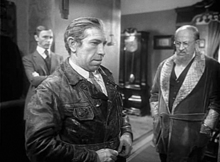 The mid-1920s brought into his acquaintance the works of H.G. Wells, whom Bulgakov quickly came to admire. His fascination with Wells’ work resulted in several stories with elements of science fiction, notably the Fatal Eggs (a.k.a. Eggs of Doom) and The Heart of a Dog.

In these works Bulgakov’s sci-fi plot is a background for a virtuoso satiric composition of a legion of social perversions typical of the early years of the Soviet regime.

The Fatal Eggs tells the story of Professor Persikov, who while experimenting with eggs, discovers a red ray that accelerates growth in living organisms. At the time, an illness passes through the chickens of Moscow, killing most of them and, to remedy the situation, the Soviet government puts the ray into use at a farm.

Unfortunately there is a mix up in egg shipments and the government-run farm receives the shipment of ostrich, snake and crocodile eggs. The mistake is not discovered until the eggs produce giant monstrosities that wreak havoc in the suburbs of Moscow and kill most of the workers on the farm. The propaganda machine then turns on Persikov, distorting his nature in the same way his ‘innocent’ tampering created the monsters.

Heart of a Dog features another professor – Preobrazhensky – who implants a human pituitary gland into a dog named Sharik. The dog then proceeds to become more and more human as time passes, picking for himself the name Poligraf Poligrafovich Sharikov, and makes a career with the Moscow Cleansing Department Responsible for Eliminating Vagrant Quadrupeds (cats, etc.). The dog turns the life in the professor's house into a nightmare until the professor reverses the procedure.

These works already could easily be read as critical satires of the Soviet reality. 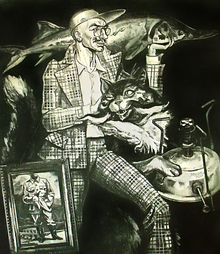 It is no wonder that in 1927 Bulgakov’s career began to suffer from soviet scrutiny. That is the main reason why his masterpiece novel, the Master and Margarita, which he started to write in 1928 to finish only in ten years stayed unpublished till 1966 (the complete edition was published only in 2007).

Bulgakov was blamed for being anti-Soviet. By 1929 Soviet government censorship managed to prevent the publication of any of his work, effectively ruining his career.

In 1930 he wrote to the government, requesting permission to emigrate.

Back then Bulgakov was best known in the country for the plays he wrote for Moscow Art Theatre. Joseph Stalin was thought to be fond of The Days of the Turbins (a play based on The White Guard) and replied to the writer himself with a phone call.

Stalin asked Bulgakov whether he truly desired to leave the country. Bulgakov replied that a Russian writer could not live far from his homeland. 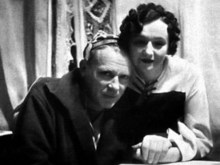 This phone conversation somewhat reassured Bulgakov. Stalin also used his influence to employ the writer at a small Moscow theatre. Having now the means to earn a living again in 1932 Bulgakov got married again. His third wife Yelena Shilovskaya subsequently became the main inspiration for the character Margarita in his most famous novel.

The couple settled near Patriarch's Ponds in the heart of modern Moscow. The place became one of the settings for The Master and Margarita, which he continued to work on in the 1930s.

In an aggressively atheistic Soviet state Bulgakov dared to mix a critique of the developing Soviet society with a unique retelling of the gospels in his novel. It begins with two individuals, a young poet and an important literary figure, walking around the Patriarch’s Ponds discussing the poet’s recent poem on Jesus Christ. Soon they are joined by the Devil himself in the discussion. After the conversation, Satan, with the help of a weird and wonderful retinue of accomplices (notably the massive talking black cat known as Behemoth), goes on to wreak havoc amongst Moscow’s citizens, in turn exposing their greed and narrow-mindedness. The latter, according to the Devil, ‘resemble their predecessors, except tainted a bit by the housing issue’. 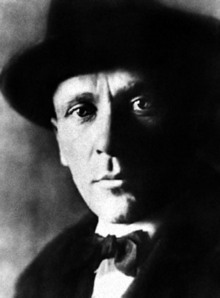 The Master and Margarita has several seminal chapters, like the famous Black Magic and Its Exposure and The Great Ball at Satan’s. In addition both the characters themselves and various lines in the book have since become some of the most widely known in the history of Soviet literature. The love story between the Master and Margarita’s in turn became an all-time favourite for young Russian readers.

However the reassurance by the omnipotent Soviet leader proved to be only temporary. In the 1930s Bulgakov mainly worked on plays and screen adaptations, none of which actually made it to the stage, the screen or even published. He attempted to contact Stalin with a number of requests, but his letters were left unanswered.

In 1936-1939 Bulgakov wrote The Theatrical Novel (Notes of a Dissident), in which he unleashed a shattering satire on Konstantin Stanislavsky, Vladimir Nemirovich-Danchenko and many other employees of the Moscow Art Theatre.

Bulgakov died from nephrosclerosis (an inherited kidney disorder) on March 10, 1940. He was buried in the Novodevichy Cemetery in Moscow. His father had died of the same disease.

Bulgakov and his most famous novel has survived in the minds of its readers, some of whom have used Bulgakov’s ideas as an inspiration for their own work.

Indian writer Salman Rushdie listed The Master and Margarita among the inspirations for his novel The Satanic Verses, just like Mick Jagger for his song Sympathy for the Devil.

Painter H. R. Giger named a 1976 painting of his The Master and Margarita.

The 1975 cult classic Rocky Horror Picture Show is sometimes noted for its similarities to the book, though the inspiration has never been confirmed by the movie's creators.

In the You Are Empty videogame by 1C there is a chapter titled Kolhoz-2, where you confront giant overgrown-hen-like mutant creatures that are an obvious reference to The Eggs of Doom.

In the Grand Theft Auto 4 videogame by Rockstar North, there is a mission titled The Master and The Molotov, in which you have to kill a man named Mikhail.