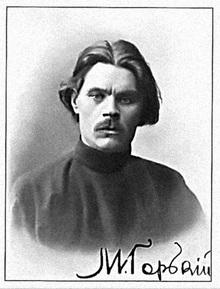 He was born in Nizhniy Novgorod into the family of a cabinet-maker (although some sources suggest his father was the director of the Astrakhan steamship line). His father died of cholera in summer 1871. His mother blamed little Gorky for involuntarily causing his father’s death, as the man caught cholera while taking care of the sick boy. For this reason his mother gave him to the family of her father, who owned a dye-house. When he was six, Gorky learned to read and write in Old Church Slavonic. Three years later, he began his education at the Nizhniy Novgorod Kunavinskoe College.

In 1879 Gorky’s mother died of rapid lung tuberculosis. Ensuing family conflicts resulted in his grandfather’s impoverishment and insanity. The lack of money forced Gorky to abandon his education to seek for his fortune. He spent five years working first as a shoemaker’s apprentice, then an apprentice in a graphic workshop, then in an icon painting shop. He eventually became a kitchen hand on a steamship traveling along the Volga River. Years later, Gorky remembered the steamship’s cook, Smury (the nickname translates as Gloomy), who was only semiliterate, but gathered books nonetheless. Thanks to him, young Gorky got to know various works of world literature and was able to self educate himself.

In 1884 Gorky moved to Kazan, dreaming of entering university. That didn’t come to happen because of lack of money. Instead he enrolled in the “revolutionary underground school.” He attended gymnasium and university populist clubs, reading the relevant literature and fighting with police. At the same time he earned his living doing menial work. In December 1887 a series of misfortunes led him to a suicide attempt. After that, Gorky traveled around Russia in search of a job and experience. He traveled to the Volga Region, the Don, Ukraine, Crimea, South Bessarabia (now part of Moldova) and the Caucasus. He worked as a laborer in a village, a dishwasher, a railroad guard and a worker at a fishery, a salt-works and a repair workshop. At the same time he managed to get acquainted with people from arts circles, take part in clashes with police and earn an overall reputation as an “untrustworthy” individual. In his travels, he collected prototypes for his future characters, which can be seen in his early works, where the characters were people from the “bottom” echelons of society. 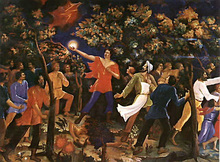 In September 1892 the Tbilisi newspaper “The Caucasus” (“Kavkaz”) first printed Gorky’s short story “Makar Chudra.” Gorky’s establishment as a writer was influenced by the Russian-Ukrainian writer Vladimir Korolenko, who introduced Gorky to publishing houses and corrected his manuscripts. In 1893 through 1895 Gorky’s short stories were often published in the Volga Region papers. In those years he wrote “Chelkash,” “Vengeance” (“Mest”), “Old Woman Izergil” (“Starukha Izergil”), “Emelyan Pilyay,” “Conclusion” (“Vyvod”) and “The Song of a Falcon” (“Pesnya o Sokole”). He signed his works with pseudonyms, of which he had around 30. The most famous were “A.P.,” “M.G.,” “A-a!” “One of the Perplexed,” “Iegudiil Khlamida” and “Taras Oparin.”

In 1895 Korolenko helped him get employment with the “Samara Newspaper” (“Samarskaya gazeta”), where he wrote daily articles for the gossip column “By the Way” (“Mezhdu prochim”), signing them as Iegudiil Khlamida. While at the paper he met Ekaterina Volzhina, an editor, whom he married a year later.

Another year later Gorky started working in his hometown, at the “Nizhniy Novgorod Leaflet” (“Nizhegorodskiy listok”) newspaper. In 1897 he suffered from aggravated tuberculosis and moved to the Crimea together with his wife. Later they moved to the village of Maksatikha in Ukraine’s Poltava Region. That same year, his son Maksim was born. At the beginning of 1898 Gorky returned to Nizhniy Novgorod, where he worked on compiling a collection of his works. His first two-volume collection “Sketches and Short Stories” (“Ocherki i rasskazy”) was published. The collection was praised by critics as a phenomenon of Russian and European literature. A year later, it was republished in three volumes. Gorky was rapidly becoming one of the leading literary figures in Russia.

In April 1901 Gorky was detained in Nizhniy Novgorod for having taken part in student unrest in St. Petersburg. He remained in detention for a month, after which he was put under house arrest, and later expelled to Arzamas (in the Nizhniy Novgorod Region). That same year the magazine “Life” (“Zhizn”) published “The Song of the Stormy Petrel” (“Pesnya o burevestnike”), which triggered the magazine’s shut down by authorities. A year later the Moscow Art Theater staged the plays “The Lower Depth” (“Na dne”) and “The Philistines” (“Meshchane”). “The Lower Depths” premiered triumphantly. Gorky was elected an honorary academic of polite literature. However, under Emperor Nikolay II’s order, the result of the election was annulled. In 1903 Gorky wrote the poem “Human” (“Chelovek”), which he later named his “creed.” That same year Gorky broke up with his wife. In 1900 he had met the Moscow Art Theater actress Maria Andreeva, who became his common-law wife in 1904. 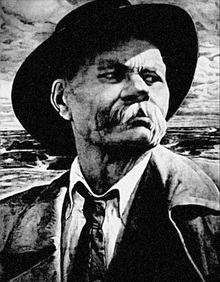 In 1905 Gorky was an active participant in the revolution. He was a close associate of the social-democrats but at the same time, on the eve of “Bloody Sunday” (a key moment in Russia’s history, which served as a trigger for the 1905 Revolution) he visited Sergey Witte, the author of the October Manifesto of 1905, and together with a group of intellectuals he tried to prevent the tragedy. After the revolution Gorky was arrested on charges of preparing a coup d'état, but both Russian and European cultural figures rose up to defend the writer. He was released and at the beginning of the following year, emigrated from Russia. He went to America to collect funds to support the Russian Revolution.

In 1907 his novel “Mother” (“Mat’”) was published in America. From late 1906 through 1913 Gorky lived on the Italian island of Capri. There, he wrote the plays “The Last” (“Poslednie”) and “Vassa Zheleznova,” the novellas “Summer” (“Leto”) and “The Okurov Town” (“Gorodok Okurov”) and the novel “The Life of Matvey Kozhenyakin” (“Zhizn Matveya Kozhemyakina”). Starting from 1908 Gorky corresponded with Lenin, arguing with him over their differing views. For example, Gorky believed that revolution should be connected with education and humanism, which set him against the Bolsheviks.

In 1913 Gorky returned to Russia. That same year he wrote “My Childhood” (“Detstvo”), and two years later, he wrote the novel “In the World” (“V lyudyakh”). He also started to publish the magazine “The Chronicle” (“Letopis”). After the 1917 Revolution his position became ambiguous: on the one hand, he was supportive of the new authorities, but on the other hand, he kept to his own beliefs, thinking that mass culture is more important than class struggle. At the same time, he started working at the “World Literature” (“Vsemirnaya literatura”) publishing house, founding the newspaper “New Life” (“Novaya Zhizn”). Gorky’s relations with the authorities gradually aggravated. In 1921 he left Russia, officially going to Germany for medical treatment, but in fact escaping Bolshevik retribution. 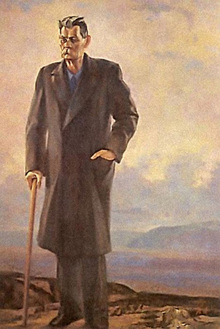 He lived in Germany and Czechoslovakia until 1924. During this time he actively wrote articles for German magazines (“The Acknowledgement of a Poet and the Russian Literature of Our Time,” “The Russian Cruelty,” “The Intellectuals and the Revolution”). All the articles show his rejection of what had happened in Russia. Gorky actively strived to unify Russian artists working abroad.

In the mid-1920s Gorky moved to Sorrento, Italy, where he started work on the novel “The Life of Klim Samgin” (“Zhizn Klima Samgina”). The novel was never finished. In 1928 he journeyed to the USSR and spent the summer traveling around the country. His impressions on the trip were published in the book “Around the Union of Soviets” (“Po Soyuzu Sovetov”).

Three years later Gorky moved to Moscow. Having seen the results of Bolshevik rule while traveling, he set as his goal the promotion of the new “cultural construction” of the country. He initiated the creation of literary magazines and publishing houses. Later he organized and chaired the first all-Soviet meeting of Soviet writers. In May 1934 Gorky’s son was killed. Some suspected the NKVD (the People’s Commissariat of Internal Affairs) was responsible for the killing. Two years later Gorky died himself. Speculations continued to surround his death for years; one popular theory suggested he was deliberately poisoned. Gorky is buried in Moscow.