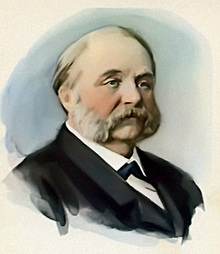 The Russian novelist Ivan Goncharov is one of the greatest realists of Russian literature. His novel "Oblomov" and other works are considered classics of Russian fiction.

Ivan Goncharov was born into the well-to-do family of a grain merchant on 18 June 1812 in Simbirsk (now Ulyanovsk). Although the family background was of the merchant class, young Ivan was brought up in the patriarchal atmosphere of Russian manor life. Goncharov's father died in 1819 leaving Ivan to be raised by his godfather, Nikolai Tregubov, a liberal-minded aristocrat and a former mariner. It was Tregubov who developed in the boy a love for novels about traveling, journeys and adventures – young Goncharov hung upon his stepfather’s lips when the latter recalled his sea voyages and all the difficulties he had to stem. 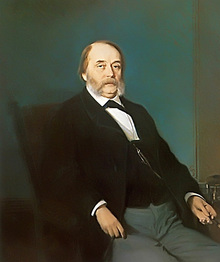 Goncharov received an excellent private education. At the age of eight he was sent to a private school, where he stayed for two years until, at the age of 10, he was sent to a private boarding school in Moscow, specializing in commerce. Later, in August 1831, Goncharov successfully entered the Moscow State University, where he studied in the department of literature. Goncharov was quite unsociable and viewed politics with a certain skepticism and therefore did not join any of the student circles that dedicated much of their time to discussing philosophical issues and socio-political matters.

After graduating from the university in 1834 Goncharov returned to Simbirsk and stayed there for nearly a year, serving in the governor’s secretariat. But life far from the city seemed boring, and Goncharov soon moved to Saint Petersburg. The first ten years in the capital were tranquil and longsome – Goncharov had to serve as a petty official at the foreign trade office. Still, these years turned out to be quite useful, as the writer had plenty of time and opportunity to watch the clerks and officers whose lives he would later describe in his works.

In 1838 and 1839 almanacs of the literary society headed by Nikolay Maikov (Goncharov became acquainted with Maikov’s sons - the poet Apollon Maikov and his brother Valerian - who encouraged Goncharov in his writing aspirations while working at the foreign trade office in St. Petersburg) published Goncharov’s first romantic verses and novelettes. Later, in the spring of 1846 Goncharov met Belinsky – one of the most renowned Russian literary critics of all times. The latter had a great influence upon the young writer.

Goncharov's first novel, “Obyknovennaya Istoriya” or “A Common Story,” which dealt with the conflicts between the excessive romanticism of a young Russian nobleman freshly arrived in Saint Petersburg from the provinces and the emerging commercial class of the capital with its sober pragmatism, was published in 1847 in the periodical “The Contemporary.” It was a true sensation in Russia, thanks to the young writer’s talent and praise from the critic Belinsky.

Between 1852 and 1855 Goncharov served as a secretary to the legendary Navy Admiral Yevfimy Putyatin. The writer took part in the historic Russo-Japanese Treaty of 1855, serving as the official interpreter between the Russian and Japanese governments. At that time Goncharov made voyages aboard the Russian Navy frigate "Pallada," visiting many countries in Europe, Africa and Asia. When he returned to Russia he wrote a travelogue describing the journey. It was published in 1858 and presented a chronicle of his three-year voyage; “Frigate Pallada” made a splash in Tsarist Russia. 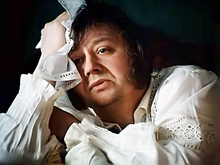 After returning to Saint Petersburg in 1856 Goncharov became a government censor - a post that earned him criticism and mistrust among many of his contemporaries. Although his politics as a censor were clearly conservative, when it came to reviewing Russian journals and almanacs, he tried to use his position to allow many important and liberal works of literature into print, including works by Fyodor Dostoyevsky and Alexander Herzen.

Goncharov’s next book, “Oblomov,” published in 1859, made its author a living classic. The novel described a man who was too lazy and inert to live; the work deals not only with the social phenomenon of inertia, but also with the Russian national character. Still, “Oblomov” wasn’t easy to write – Goncharov spent several years producing sketches, throwing them away and rewriting. The novel was hailed as a masterpiece and among others Fyodor Dostoyevsky considered Goncharov a literary equal. From the figure of Oblomov (the main character of the novel) derives the frequently used Russian term “oblomovshchina” meaning backwardness, inertia. “Oblomov” was even compared to Shakespeare's “Hamlet.” The novel was adapted into the eponymous film. In modern Western literature, it is said to have inspired Samuel Beckett's play “Waiting for Godot.”

In 1860, when censorship became even more severe than before, Goncharov retired from his government position. But some time later he was again asked to take a position as a censor, which he accepted. He did not quit definitively until 1867. 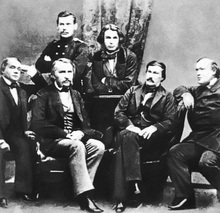 Goncharov wrote numerous short stories, critiques, essays and memoirs and continued traveling outside of Russia, but remained known primarily for his novels. During the 1860s Goncharov was part of the St. Petersburg cultural milieu.

The third most famous novel by Goncharov, “Obryv” (“The Precipice”), appeared in 1868 though it was started in 1849. As the writer had to work and earn a living, he could not dedicate all his time to writing and the work on the novel slowed and was resumed year after year. Goncharov felt he was getting older, causing him to put the work aside. At times Goncharov felt so pessimistic he thought he wouldn’t be able to finish “Obryv.” The last novel of the writer described the rivalry between three men, a nihilist, an idealist and a commonsensical neighbor, for the love of a mysterious woman. The work, however, did not attract much initial attention. Only several years later did the public begin to show interest in “Obryv.” With the help of his three most famous novels Goncharov is believed to mirror a certain step in the historical development of Russia.

On 12 September 1891 Goncharov caught a cold. The illness developed rapidly and three days later, on 15 September, Ivan Goncharov died of pneumonia at the age of 79. He was buried in Saint Petersburg in the Alexander Nevsky Monastery.

Ivan Goncharov never married, he was said to be shy with women and his love affairs remained a mystery.

Goncharov was said to have shown certain signs of mental instability. For example, he accused Flaubert of getting the idea for “Sentimental Education” from Turgenev, who, in his turn, had heard it from Goncharov. Goncharov's unfounded accusation of plagiarism against Ivan Turgenev caused a scandal in the literary world. Goncharov lived most of his life in sedentary seclusion.