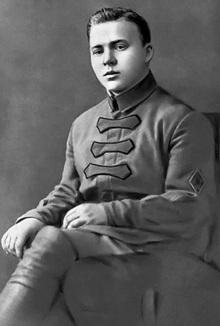 Arkady Gaidar (real name Golikov) was both a famous writer and a Red Army field commander known for his courage and ruthlessness.

In days of old, mounted warriors on the march would send a horseman ahead as a scout. He was called a gaidar. Arkady Gaidar was a keen-eyed scout, a true son of the revolution, a man in the vanguard of Soviet literature. The pseudonym he chose proved to be an apt one indeed. Gaidar’s writings, his own heroic life of dedicated service to his country and the revolution, and his fidelity to his vocation of author and educator will forever remain a lofty example of the writer’s mission in the Soviet era.

Arkady Gaidar was born on 22 January 1904 in the town of Lgov, Kursk Region. In 1912 the family moved to Arzamas, a town in the Nizhny Novgorod region. Ten years later Arkady watched his father, a schoolmaster, march off to war. Young Arkady ran away from home and tried to join his father at the front. Four days and ninety kilometers later, he was apprehended and returned home. In 1918 Arkady, then 14, decided that he too would join in the fight. Tall and broad-shouldered, he boldly gave his age as sixteen when he volunteered for the Red Army. A year later he finished a training course in Kiev and was put in command of a company, heading a regiment at the age of only sixteen.

From his early youth Gaidar knew of sorrow and separation, aching wounds and the fire of battle, the bitterness of defeat and the joy of victory. When the Civil War, the standoff between the Bolsheviks and the pro-monarchist forces, was over, Gaidar planned to remain in service. But in 1923 an old head wound forced him to go into hospital. 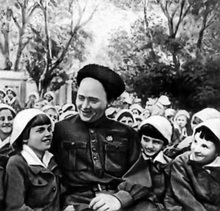 In April 1924, when Gaidar turned twenty and had been in the Red Army for six years, he was transferred to the reserve forces because of his poor health. He plunged into despair. Arkady wrote an impassioned letter of farewell to the army and sent it to People’s Commissar Mikhail Frunze, the famous proletarian army commander. Frunze was so impressed by the letter that he asked Gaidar to come and see him.

Gaidar began writing his first stories in December 1924. They appeared in print between 1925 and 1927. He studied writing with the prominent writers of the time, who would literally break Gaidar’s work down into pieces, sentence by sentence explaining to him the rules and peculiarities of the genre as he eagerly absorbed their every word.

Following his demobilization, Gaidar married and had a son, Timur. However, the marriage broke up. In 1930 Gaidar wrote “The School,” one of his best books. “Probably because I was only just a boy when in the army, I wanted to tell boys and girls of the new generation what it was like, how it all began and what came afterwards, for I did manage to see quite a bit of life.”

“The School” is a largely autobiographical story about the school of life and about fathers and sons who took up arms to fight a just war for a happy future, as they truly believed those days. The hero of the book, a soldier’s son named Boris Girikov, who tells the story, is easily recognizable as Arkady Gaidar. It immediately became one of the most popular children’s books. Children in every town and village of the Soviet Union read Gaidar. 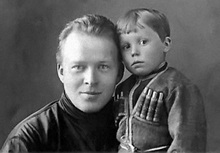 Arkady Gaidar didn’t live long enough to write a great deal. But his works like “The School,” “The Fourth Dugout,” “Distant Lands,” “The Blue Cup,” “Chouk and Ghek” and of course, “Timur and His Squad” became widely popular. Gaidar wanted his books to teach Soviet children the meaning of such concepts as honor, daring and truth. When World War II broke out and the unprecedented heroism of the Soviet people, including children, astounded the world, people often recalled the grudging admiration of the boy’s main enemy in Gaidar’s “Military Secret”: “What is that strange and incomprehensible country where even little children know the Military Secret and keep their word so well!!”

Gaidar’s tales explained that the Soviet people, young and old, were a closely-knit family united by great ideals and devotion to their country. “The Drummer Boy” was written in 1938. Gaidar said: “This is not a book about war, but it is about things just as grim and dangerous as war.” 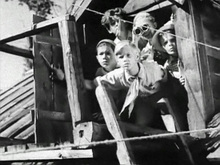 In “Timur and His Squad,” which appeared in 1940 and came to occupy a significant place in the history of literature, Gaidar spoke to children about the most important things in life. Timur was a schoolboy, a member of the Young Pioneers, who thought up a splendid way of assisting the Soviet Army. He and his friends began to help dependants of men who were in the armed forces, but they did it secretly, so as to remain anonymous and to shroud their work in the aura of mystery so dear to children. Timur, an energetic, daring, big-hearted lad, devised ingenious ways of doing this. No sooner had they read the book than thousands of Soviet boys and girls began to emulate Timur. Not only did Gaidar’s book become tremendously popular among children but, unlike any other book, it overflowed into life as it were. A countrywide movement, known as the Timur movement, sprang up. The word timurovtsy appeared, signifying children’s patriotism and their desire to contribute to the people’s victory over the enemy. In 1941, teams of timurovtsy all over the country, in addition to helping the families of soldiers, did large amounts of unskilled work: cleaning railways, preparing firewood, loading and unloading cargo, etc. Their activities were widely reported in newspapers and on the radio. During 1941-1945 there were more than two million timurovtsy in Russia.

Illness frequently forced Gaidar to set aside his pen, but as soon as he felt better he returned to his writing and became engrossed by new ideas. In the autumn of 1941 Arkady Gaidar was a war correspondent and then became a member of a partisan unit operating behind enemy lines. In the intervals between battles, sharing the partisans’ life of deprivation and constant danger, Gaidar kept the detachment’s diary and wrote drafts of some stories. 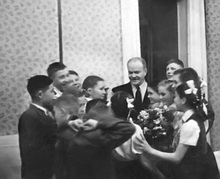 On 26 October 1941 Gaidar was fatally injured in a battle with SS units. Later a trackman found Gaidar’s body and buried it beside the railway line. After the war, Gaidar’s remains were transferred to the Ukrainian town of Kanev, where they were buried on a hill overlooking the Dnieper River.

In the fairy-tale that is a part of “Military Secret,” the young hero “was buried on a green hillock overlooking the Blue River.”

Russian economist Yegor Gaidar is Arkady Gaidar's grandson. In the autumn of 1991, at the age of 35, he had to deal with the collapse of the Soviet economy and the disintegration of a nuclear empire into 15 states. Boris Yeltsin asked him to serve first as deputy prime minister, then as finance minister and then as acting head of government.