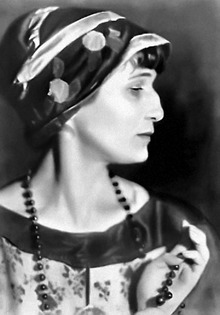 Akhmatova was born in a Ukrainian village, near the city of Odessa. A year later, her family moved to Tsarskoe Selo (Tsar’s Village) near St. Petersburg, where she lived and studied until she was 16.

Akhmatova started writing poetry at the age of 11, inspired by her favourite poets: Pushkin, Racine and Evgeny Baratynsky.

Anna Akhmatova came into poetry as a representative of the literary movement acmeism, with her husband being one of its leaders.

It opposed itself to symbolism, with its romantic mysticism, and instead attempted to use more clear and vivid images.

Acmeism did not last for long, but Akhmatova never renounced it, although her growing literary principles were much more diverse and complicated. 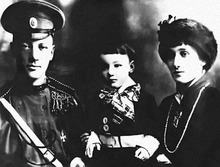 Anna Akhmatova with husband
Nikolay Gumilev
and son Lev in 1916
(image from akhmatova.org)

Her first collections of short lyrical poems Evening (1912) and especially Rosary (1914) brought her fame. The psychologically-acute, brief pieces are known for their classical diction, detailed elaboration and use of colour.

Akhmatova’s early poems usually centre on the relationship between a man and woman during its most-significant and sensitive moments. In these anthologies, and the last pre-revolutionary White Flock (1917), her poetic manner was defined.

The combination of understatement, which had nothing in common with symbolism’s mysticism, went together with a precise portrayal of pictures.

The first lines of the poem Song of the Last Meeting (1911) has become, to many, Akhmatova's so-called 'calling card': 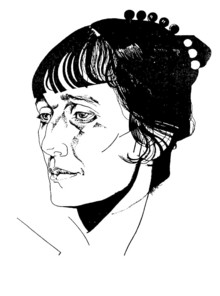 Anna Akhmatova in 1921,
a portrait by Yury Annenkov
(image from ahmatova.niv.ru)

My breast grew helplessly cold,
But my steps were light.
I pulled the glove from my left hand
Mistakenly onto my right.

An expression of the inner world though the outer, very often using contrast and resembling a psychological prose, the dotted action and the presence of characters and even small dialogues – all these characterizes Akhamatova’s poetry style.

The Queen of Neva

She did not acknowledge the word “poetess”, referring to herself and letting others speak of her only as a “poet”. Her contemporaries called her “Queen of the Neva” and “Soul of the Silver Age” (as the period is known in the history of Russian literature).

In the longest of her works, Poem without a Hero (1940-1965) (inspired by Pushkin’s Eugene Onegin), the combination of history, culture and man’s immortality are underlined.

Secret reminiscences about the First World War read as a foretelling of WW2, with all the repressions and catastrophes of the epoch (The real, not the calendar / Twentieth Century came.)

Poem without a Hero is also a deeply personal work, filled with associations, obvious and hidden quotations from the literature of the 19th and 20th centuries.

Akhamatova's structured cycles of poems, the well-known Requiem (1935-1940), was the product of intensely hard work. A highly-autobiographical, tragic masterpiece with a unique composition, it addresses the fate of a woman and poet working and living during the Stalinist repressions. Anna Akhamatova memorised the poems of Requiem and only dared to write them down in 1962. 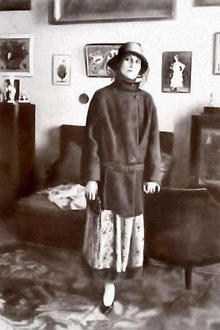 Not under foreign skies protection
Or saving wings of alien birth -
I was then there – with whole my nation -
There, where my nation, alas! was.

It's considered one of the great Russian poetic testaments of the 20th century, and was only published in the poet’s homeland 25 years later – in 1987.

Akhmatova became a symbol of suppressed Russian poetry, because of the strained relations with the government at the time.

Her personal life was also marred by tragedy. Her first husband and Russian poet, Nikolay Gumilev, was executed in 1921 for activities considered anti-Soviet. Her third husband, the prominent art scholar, Nikolay Punin, died in the Stalinist Gulag camps, where her only son, Lev, spent his youth.

One goes in straightforward ways,
One in a circle roams:
Waits for a girl of his gone days,
Or for returning home.

But I do go – and woe is there –
By a way nor straight, nor broad,
But into never and nowhere,
Like trains – off the railroad.

In 1922 Akhmatova was condemned as a bourgeois threat and her poetry was banned from publication for 15 years. During this time, she earned her living by translating and writing essays, including some from her favourite writer, Aleksandr Pushkin.

Many of her friends either emigrated or faced repression, and only a few in the West knew she was still alive when, in 1940, the veto on publishing her works was lifted.

During World War II, Akhamatova witnessed the nightmare of the 900-day Siege of Leningrad.

When she returned to the city following the central Asian evacuation to Tashkent, she was distressed by what she called a “terrible ghost that pretended to be my city”.

In 1946, her works were banned from publication again. Only after Stalin's death in 1953 the Soviet government admitted Akhmatova's importance among Russian poets, releasing a censored edition of her work.

She managed to reunite with some of her pre-revolutionary friends in 1965 when she was allowed to travel to Sicily and England.

Anna Akhmatova was married to the famous Russian poet Nikolay Gumilev from 1910 until 1918 with whom she had her only child, Lev, in 1912. She died in 1966 at the age of 76 in Domodedovo and was buried in St. Petersburg.