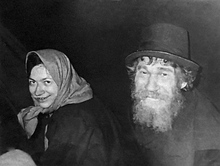 The Lykovs are a family of Old Believers who lived as hermits in the deep taiga of the Sayan Mountains in Southern Siberia from the 1930s up until they were accidentally discovered in 1978 by geologists exploring the Bolshoy Abakan River. They were unfamiliar with any civilization and the story resonated greatly in the Soviet press at the time.

The Lykov family spent about 50 years in a remote region of the Sayan taiga. The reason for their seclusion is rooted as far as three hundred years back in history, when after a schism in the Russian Orthodox Church, the Old Believers, who were against church reforms, went northward. The Lykov’s ancestors settled in the taiga, reportedly pushed out of civilization by the tragic events of the years of total collectivization, particularly by the burning of their farms. 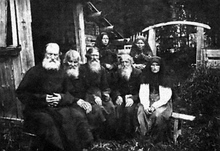 In the 1930s they lived with their fellow believers on a farm in the taiga, but later infighting caused them to split from the community. Their whereabouts were not a secret at the time, however, as their house could be found on local maps. But in 1945, a patrol appeared looking for deserters and scared them off. The Lykovs departed hastily and hid in the mountains for the next 30 years.

Without any contact with the outside world, the family lived in accordance with the laws of their faith. They supported their bodies with berries, healthy food and hard work, and their spirits with prayers. Every member of the family was obliged to work. They used the materials at hand to build root cellars to keep food in, started fires with flints, grew their own vegetables and sewed their own clothes from the fabric they also made themselves.

They lived off farming, fishing and hunting. They salted the fish and extracted fish oil. As far as hunting is concerned, their faith only allowed them to hunt hoofed game, as animals with claws were believed to embody the devil. The Lykov brothers hunted elk using pits three meters long, wide and deep. These animals constituted the bulk of the Lykov’s protein food. Even more interesting was the way they hunted deer: the two brothers simply chased the animal to exhaustion and when it fell down, they finished it off with a knife.

At first, the Lykov family had six members: the father Karp Iosifovich, the mother Akulina, their sons Dmitry and Savin and daughters Natalya and Agafya. They hid deeper and deeper in the taiga in an effort to escape contact with potentially hostile people. It wasn’t until 1978 that a group of geologists stumbled upon the family’s little house in the thick of the forest. It turned out the Lykovs never considered their living conditions “extreme.” For them, it was a normal, albeit difficult, life.

In 1982, a series of newspaper articles put the Lykov’s secluded abode on the map for the whole world to see. People were moved by the story of forest hermits coming to know civilization. 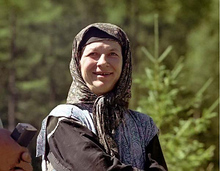 Doctors found no health irregularities in the family members, but contact with people turned out to be lethal for them. Three years after they were discovered, three Lykovs died during just two fall months. Karp Iosifovich’s elder children, having been born and having spent all of their lives in the taiga conditions didn’t have the immunity that protects modern day people from infective diseases. And the arrival of infections at their remote farm was just a matter of time, with all the people making the trip to visit the reclusive family. Savin, Dmitry and Natalya died one after another.

That fall, all the members of the family fell ill. Karp Iosipovich weathered the illness the best, probably because he lived among people for many years and had acquired the necessary immunity. Agafya fell ill too, but was young and healthy enough to overcome the disease. Karp Osipovich died after a subsequent visit by geologists. He probably also infected Agafya, but the doctor who was brought from a nearby village made her drink a medicine.

Agafya, although left alone, keeps living the life she is accustomed to, surviving off agriculture and fishing. She greets every day with a prayer and goes to sleep with one. However, her everyday life is exhausting. She is surrounded by wolves in winter and bears in summer. Agafya has refused to move to civilization or receive a pension, spending her time on household chores and prayers. Local authorities take care of the hermit bringing her firewood, foodstuffs and chickens and organizing volunteer trips to help her run the house and garden.