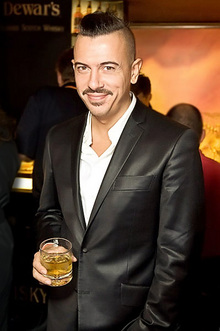 The fusion of old and new Russia

With little known about Simachev himself, the brand he’s created is widely recognisable by dedicated followers of fashion in Moscow and, more recently, in other fashion capitals of the world. Aiming to find the true Russian spirit in fashion, Simachev creates his designs by fusing contemporary mass culture with highlights of different times in the Russian history.

Denis Simachev studied as a shoe designer at the State Textile Academy. In 1999 he took several prizes at various contests of young fashion designers. He seems to have stepped into the fashion world at the right time. In the 1990s a new generation of fashion-conscious young people with money to spend was emerging, but they didn’t have a hint of a formed original style.

The brand is intentionally provocative, creating new looks with traditionally Russian imperial, revolutionary and Soviet symbols. Simachev’s shirts with the USSR emblem and slogans like “Oil is our everything”, T-shirts with prints of Putin framed in embroidered flowers, Russian style fur hats with earflaps (essential to survive cold northern winters) and golden jewellery copying Soviet coins are just some of the designer’s creative highlights, with price tags similar to those of the world’s top fashion brands such as D&G or Prada. He now shows men’s and women’s collections in Moscow and Milan twice a year.

Wrapped up in Khokhloma 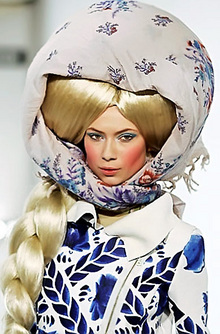 The designer’s first monobrand store, Simachev Bar & Shop, opened in early 2007 in Moscow. Situated on Stoleshnikov Lane, the city’s luxury shopping spot, where the boutiques of Europe’s biggest fashion houses are located, the shop with a bar on its lower-level definitely added some quirky humour to the area.

Following his belief that “people always accept things more easily when you give it to them with a smiley face”, the designer Christmas-wrapped his store (situated between very traditional Hermes and Burberry boutiques) in gaudy Khokhloma – a 17th century Russian folk print. Indeed, Khokhloma has become the signature of the designer.

One of the designer’s global projects is a collaboration with the famous Swarovski house. In 2008 Denis Simachev was invited to create a vision of jewellery for Swarovski. Thus a helmet decorated with crystals in Khokhloma print appeared.

The designer is also known as a frequent party-goer and DJ. Simachev’s musical style, as well as his fashion creations, fuses and highlights many different influences.