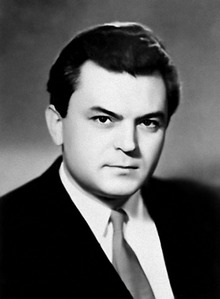 Sergey Bondarchuk was born and raised in Southern Ukraine. From an early age he was fond of literature and theatre. He made his stage debut at the age of 17 and soon became a student of the Rostov Theatrical School. His studies were interrupted by the Nazi invasion, and in 1942 he was recruited to the Red army.

After the war he continued his education in the State Institute of Cinematography (VGIK) in the class of Sergey Gerasimov. Right after graduation in 1948 he debuted in Povest o Nastoyashchem Cheloveke (Story of a Real Man) and starred in Molodaya Gvardia (The Young Guard). Before filming was over, he married another star of the film, Tamara Makarova

Bondarchuk's star role in Taras Shevchenko in 1951 was highly appreciated by Stalin and brought him the State Prize of the USSR and the title of People's Artist of the USSR when he was only 32 years of age. In 1955 he played the title character in the internationally renowned adaptation of Othello. Irina Skobtseva, who played Desdemona, became his second wife.

The Directorial debut of Sergey Bondarchuk in Sudba Cheloveka (Destiny of a Man) based on Mikhail Sholokhov's story, left some critics unconvinced.

However it earned him Lenin's Prize, the highest Soviet award, in 1960. Thus he

An image from Leo Tolstoys War and Peace
adaptation by Sergey Bondarchuk (afisha.ru)

became the most reputable Soviet filmmaker of his generation, and it gave him almost unlimited possibilities.

And the Oscar goes to...

His next project, an adaptation of Leo Tolstoy's War and Peace, became the most expensive film in Russian history. Its production lasted for seven years (1961 to 1968) and cost over $100 000 000. It also set a record for the number of actors involved in mass scenes and extras, and introduced innovative technologies such as remote controlled cameras, suspended on 300 metre long wires over the largest battle scene. War and Peace received an Academy Award for Best Foreign Language Film in 1968. 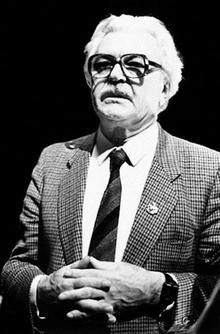 Unlike most of his fellow filmmakers in the Soviet Union, Sergey Bondarchuk enjoyed comparative independence in his creative work. He was allowed to act in foreign productions as well as shoot abroad or book international stars for his pictures. Very often it meant compromise with the Communist authorities. He had to swap his freedom of expression and take part in Soviet propaganda in exchange for the opportunity to work with Dino de Laurentis, Rod Steiger, Orson Welles, Yul Brynner or Rupert Everett.

Ironically, Bondarchuk, who escaped Communist Party membership under Stalin, had to join the party in Leonid Brezhnev 's time. For a long time he presided over the USSR Union of Cinematographers and was dismissed after the communist regime had started to degrade under Mikhail Gorbachev.

It gave him a chance to start a long awaited project – a mini series based on Sholokhov's Nobel Prize winning Quiet Flows the Don. Unfortunately due to the differences with the Italian producers the master himself was unable to finish its post-production himself. The mini series were completed in 2006, eight years after Bondarchuk's death from a heart attack.

Sergey Bondarchuk's career spanned five decades. Besides his acclaimed cinematographic works, he left behind a dynasty who continue his tradition in film making.