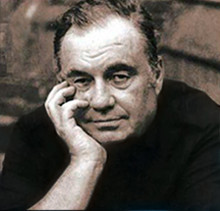 Eldar Ryazanov is a famous Russian filmmaker, playwright, poet and People's Artist of the USSR laureate. Most of his films were created during the period of severe Soviet censorship; nonetheless, they were brutally honest and displayed the flaws of his society, full of tragedy and humor at the same time.

Eldar was born in Samara, a city on the Volga River. Since his parents used to work in a Soviet Trading Representation in Iran, they chose an oriental name for their child: Eldar. A few years after his birth, they moved to Moscow.

Young Eldar learned to read at the age of three. He read everything that came his way: Shop signs, wall inscriptions and newspaper headlines. He was fascinated by how way letters merged into words. At the age of five, he picked up more serious reading: Fairy tales and children’s poetry at first, and quickly moved on to Jack London, Mayne Reid, Fenimore Cooper, Jules Verne and Alexandre Dumas. In junior school, Eldar’s favorite book was ‘Martin Eden’ by Jack London, who was a sailor-turned-writer – something Eldar dreamed of becoming himself someday.

Eldar decided to become a writer when he was a teenager. Books brought him his greatest pleasure in life, and he wanted to share this pleasure with others. His only shortcoming, he believed, was a lack of life experience, which he deemed essential for good writers.

He lived his childhood during wartime: Hours of queuing for a piece of bread, evacuation, cold barracks, tires burned for heat, hunting the half-meter long rats that lived in the barracks, learning to cook dinner out of nothing and raising a younger brother – All that he had experienced was not romantic enough for a bestseller in Eldar’s mind. There was nothing in his life like the strong characters, faraway exotic countries, wild adventures and reckless passions he had read about in books.

Since he lacked the experiences to be a writer, Eldar decided he should learn a vocation, which would help him live a fuller life. He finished school a year ahead of time, and entered the Russian State Institute of Cinematography, one of the most popular movie schools in the country. At the time, the competition was 25 people per one vacancy in group, and Eldar’s test results were low. He was admitted under the condition that he must make high marks on his first-semester exams.

It was a hard life for immature Eldar, indeed. He hadn’t even turned 17, yet his fellow students were veterans with military pasts, or grown-ups obsessed with cinema. On the one hand, he was unbelievably ignorant; on the other, he was very eager to learn and wholeheartedly threw himself into any experiment. He was excellent material that a competent teacher could mold into anything, and lucky for Ryazanov, one of his teachers was Sergey Eisenstein.

Eldar was excited to experiment with all genres of cinema. He wrote scripts, made films of literature pieces, shot interviews and wrote articles. But not all pf his experiments were a success. After two years at the institute, one of the major professors suggested expelling Ryazanov on account of his being too young for the world of cinema. But the impertinent young man retorted that he was even younger two years ago when they had admitted him to the Institute. The professor had no choice but allow Eldar to continue his studies. 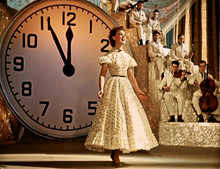 Ryazanov’s first attempts in cinema were innovative, fresh and even somewhat naïve. They were also witty, and exposed the flaws of Soviet society and human nature so well that almost every one of them has become a classic.

His first musical comedy ‘Karnavalnaya Noch’ (Carnival Night) was about how young people at a local club trick their director in order to take the stage for New Year’s celebrations, to avoid the usual boring end-of-year concert.

The fun, witty movie sold nearly 50 million tickets throughout the Soviet Union. It made young aspiring actress Lyudmila Gurchenko into an instant star, and Ryazanov became an overnight success as a director. The film is now considered a classic of Russian cinema, and its jokes are still part of everyday conversations.

In his subsequent films, Eldar criticized, albeit harmlessly, the realities of everyday life in the Soviet Union, which served as a breath of fresh air to people, who were used to being consistently fed rigid mass-propaganda. His characters were always ordinary people who found a way to survive in a world of stringent rules.

At the time, Russia was entering a period of deep stagnation. Russians were becoming disillusioned with the ideals of Communism, and clearly saw how far real life had strayed from those plans. The times were changing too – after Khrushchev’s thaw, people no longer feared they would end up in prison over an innocent joke. Ryazanov sensed these winds of change and brought the zeitgeist’s inconsistencies (putting it mildly) to the surface. 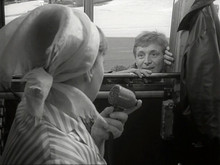 Yury Detochkin in 1966’s ‘Beregis Avtomobilya’ (Beware of a Car) is a kind of Soviet Robin Hood, who stole cars from bad people, sold them and donated the money to orphanages.

After the comedy finished, the Soviet censors were tempted to ban the film for ‘encouraging bad instincts’ like theft, and could confuse innocent Soviet moviegoers. But the film was released, and overwhelmed the box office by selling 29 million tickets.

Ryazanov’s battle with bureaucracy and censorship continued. 1961’s Chelovek iz Niotkuda (Man from Nowhere) had been shelved for 20 years because Leonid Brezhnev, the Soviet premiere at the time, did not like the film. It was about a man from the Stone Age who found himself in the 20th century, but could not find his place in a new modern society.

Still, Ryazaov never wavered in exposing the foibles of Soviet society. The most prominent film of this kind is 1980’s ‘Garage.’ A talented stage director managed to confine the shooting of the entire film to a four-wall set. The plot was simple – the main characters were members of a garage construction crew, and found themselves locked in a room during a meeting. They learned that, due to major road construction in the area, there would be fewer garages built than the number requested. Their task was to determine who should be left without a garage.

The crew’s heated discussions and arguments played on every kind of weakness of human nature. It took real talent to depict an entire society in one room, for the film’s hour-and-a-half duration. 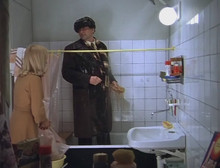 A love story unfolds between two strangers on New Year’s Eve. The tale was so touching and so well-loved, it became as essential to holiday celebrations as the New Year’s tree. The movie achieved such success, it has been shown on TV every year since 1977. It also earned Ryazanov the State Prize.

Three years later, Ryazanov released yet another comedy hit: 1978’s Sluzhebny Roman (Office Romance). Shot against beautiful scenes of Moscow with lots of poems and songs, including those written by Ryazanov, the movie sold 58 million tickets.

Besides being a genius director, Ryazanov also wrote screenplays, many of which were turned into movies. He is known for making cameo appearances in almost every on of the movies he’s written.

In the 1980s, Ryazanov was invited to host a TV program about films. Always excited to try something new, he said yes, and began the next chapter in his career. To date, Ryazanov has broadcast more than 200 different programs, featuring all kinds of life stories and interviews with famous writers, actors, and politicians. He even made a program in 1996 with then-president Boris Yeltsin and his family, on the eve of his second election to the office of president. 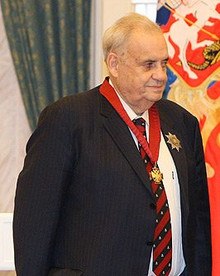 Ryazanov is one of the most beloved figures of both the Soviet era and of modern Russia. Almost every one of his two-dozen films is a blockbuster. It is difficult to overestimate how popular and well-known he is. His numerous State Awards are only a small part of the honors he’s received. He holds the highest award for people of his vocation: the People’s Artist of the USSR, as well as two Orders of the Red Banner of Labor, and two Nika awards (the Russian equivalent of an Oscar). He has also been awarded the French Order of Fine Arts and Literature for his series about French movie stars called ‘The Paris Mysteries of Eldar Ryazanov.’

Ryazanov is now over 80, and is experiencing health problems. Still, he keeps on working, and says he cannot imagine life without his biggest passion: Filmmaking.

Ryazanov’s first marriage was to his fellow student Zoya Fomina, right after they both graduated from the Institute. They had a daughter Olga, born in 1951. However, the marriage didn’t last long, and Ryazanov then married a colleague at the Moscow Film company: Nina Skuibina. She was younger than him, and he courted her for quite a while.

Nina became a great companion – she helped Ryazanov edit his scripts and shoot movies. Ryazanov lived happily with her until 1994, when she died of cancer. He later said it was the worst thing he’d ever had to face. He couldn’t stand the loneliness, and soon began dating a long time acquaintance of his – Emma Abaidullina:

“There is a theory that if a man was happily married, after he becomes a widower he’ll remarry quickly. This seems shocking, but it is actually very reasonable. Psychologists say that if a man had a good experience with a family he is subconsciously convinced that it will be just as good if he married again.  This also works the other way – if a man had a bitter experience with his previous wife – there is no way one could drag him to the altar again.”

“We were so happy with Nina. When she died, my life stopped. All I could see ahead of me was old age, sickness, and despair. But I was fortunate enough to meet Emma. None of my friends expected me to get attached so fast. I remember how worried we both were before I introduced her to my friends – however, they accepted her at once and unconditionally. I don’t think life would have been worth living, if it hadn’t been for Emma.”

- If you read Russian folklore, Russians have always wanted to get everything at once and in large quantities, while doing nothing for it. Russian fairytales, unfortunately are the essence of the national ideology. Diplomatically speaking, this kind of mentality does not inspire sympathy. Russia’s best people have always lived in defiance of it."

- Truth is where humor is.

- You see, I am a normal and healthy person, although it is a common opinion that a grand art master must be of another world with bugs in his brain. But as for me – I am of this world, and have no bugs!

- There are different kinds of fools. Some fools are in position of authority and evil, so they slowly transform into scoundrel. And then there are fools who are charming, who live well and bring joy to people!